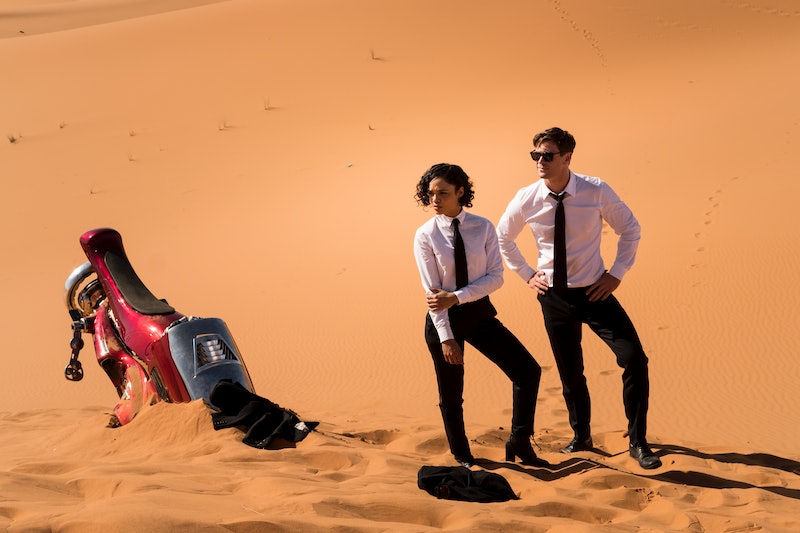 Seven years after Men in Black 3, the next installment in the franchise is here. But rather than being a direct sequel to the other movies, Men in Black: International, premiering June 14, could be considered half-sequel, half-reboot. It's, obviously, still about the same alien relations organization, just with a new man and (thank goodness) woman in black.

In the movie, Chris Hemsworth plays Agent H, a guy who has been with the organization for long enough that he knows his way around all the hottest alien nightclubs and even dated a humanoid alien arms dealer. Tessa Thompson plays Agent M, an eager new member of the Men in Black, who has been obsessed with everything extraterrestrial since she observed something strange as a kid. But while they're essentially replacing Tommy Lee Jones and Will Smith, there's no direct connection between these new characters and the old duo, other than the fact that they're all Men in Black. No one is anyone's long-lost son or daughter. (Well, at least not yet. Who knows what could happen if there's ever a sequel.)

While the first three Men in Black movies focused on Smith's Agent J and Jones' Agent K, it's always been clear that a lot of other people worked for the Men in Black, too. Men in Black: International seems to just run with that idea and focus on two other agents' mission. There's also the fact that Agents H and M are based in London. J and K were based in the U.S., so this is a way of further removing the new characters from the previous movies.

That said, J and K aren't totally left out. The London Men in Black office has paintings on the wall of significant alien/MIB encounters, and one features Agents J and K. It's a simple way of the movie showing that the characters exist in the same world, but still moving things along more quickly than, say, having Agent M ask about one of them.

The other big connection is the return of Agent O, played by Emma Thompson. O is the head of the Men in Black and was named chief in Men in Black 3, replacing Zed (Rip Torn). Agent O is the one who hires M and assigns her to the London office. Agent O also makes it clear that these worlds connect, but again, she's not going around talking about J and K and how great they were.

Other than the painting and Agent O, the other references to the previous films are smaller, like cameos from Frank the Pug and the Worm Guys.

It makes sense that Men in Black: International would leave out any major talk of Agents J and K, so that it can just exist more as a reboot than a continuation. But the fact that there are some connections means it also begs the question of what happened to them. Are they both retired now? Do M and H view them as heroes? How big of a deal are they in the history of the agency?

Unless there's a half-sequel, half-crossover in the future, these questions will probably go unanswered. After all, this is a movie where people abandon their entire lives to join a top secret organization and one character is a club-going, vodka-cranberry drinking alien. Some things just have to be accepted.