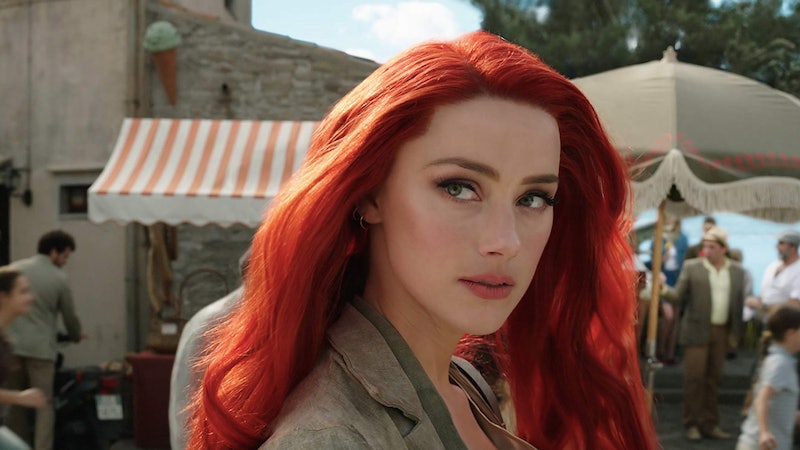 The awaited Aquaman (Jason Momoa) standalone movie is coming out on Dec. 21, expanding on the character audiences first met onscreen in last year's Justice League. But this new movie also shines more light onto Mera (Amber Heard), the Atlantean princess, and how her powers and intelligence are absolutely necessary when it comes to saving the world. Her large role in this film is warranted, considering Mera has a pretty big role in the DC comics, too.

In the comics, Mera has various origin stories, but in all of them, she is part of a royal family. She was first introduced in Aquaman #11 in 1963, where she is the queen of Dimension Aqua, a.k.a Xebel, an alien dimension that is underwater. But a villain named Leron forced her to exile her kingdom, causing her to escape to Earth. Mera ends up meeting Aquaman on Earth, and enlisting his help. But Leron captures Aquaman after a battle with him, taking him to Dimension Aqua. Ultimately, Aquaman is able to fend off Leron and invites Mera to live with him in Atlantis.

But in the 2010 series Brightest Day, Mera confesses to Aquaman that she was sent by her father to murder Aquaman, because he’s the King of Atlantis and Xebel (as referred to in this series) was actually formed by those who were banished from Atlantis during one of its civil wars. Luckily, Mera decides not to go through with killing Aquaman, and instead falls in love with him and becomes Queen of Atlantis.

Defining what’s canon and what’s not in the comic book world is a bit tricky, so there’s no definitive origin story for Mera. But it turns out that the Aquaman movie also switches up the story of how they met. Spoilers ahead.

In this film version, Mera was engaged to Orm (Patrick Wilson), Aquaman’s evil half-brother, who is Atlantis’ king and wants to start a war. And King Nereus, who is Mera’s father, agrees with Orm’s wishes. But Mera isn’t having it, and finds Aquaman, asking for his help, so that way he can also reclaim his title as the true King of Atlantis.

Aquaman is ultimately captured by Orm, but he challenges his evil half-brother to a duel, nearly dying in the process and being saved by Mera. It’s through their journey to help Aquaman reclaim his title as king that he falls in love with Mera.

And much like the comics version of Mera, she’s definitely not a damsel in distress. Aquaman and Mera work as a team to fend off both of the film’s villains, Orm and Black Manta (Yahya Abdul-Mateen II). This is the main aspect that attracted Heard to portray the heroine, too. In an interview with Entertainment Weekly, the actor shared how important it is that Mera is a superhero in her own right.

“She comes into this one scene in the first comic I read where Arthur is attempting to save the town from a flood and she helps him. She has an equal part in saving this village,” explained Heard. “And these civilians turn to each other and say, ‘Who is that? Is that Aquawoman?’ And she says something to the effect of, ‘No, I have my own name, my name is Mera.’ That resonated with me as somebody who’s always been allergic to being the damsel, the two-dimensional archetype of what women are often limited to in this industry — especially in the superhero world.”

With the massive success of 2017's Wonder Woman, and the upcoming stand-alone Captain Marvel flick, it’s clear that DC is carving a bigger space for its beloved female heroines. And having Mera take on a huge onscreen role that's more than just the love interest is another step in the right direction.