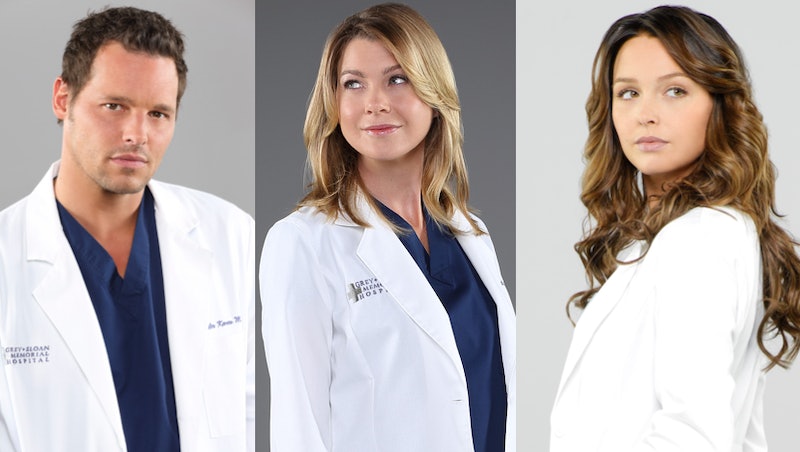 Jo and Alex have had a tumultuous relationship on Grey's Anatomy (creator: Shonda Rhimes), to say the least. The on-again off-again couple has had a lot standing in their way — possible incarceration, abusive estranged husbands, and severe anger issues to name a few. These aren't exactly your everyday stresses and squabbles, but Alex and Jo have ultimately pulled through. Within the fanbase, though, there's still always a percentage waiting to see if Alex and Meredith will get together on Grey's Anatomy. In a phone interview with Bustle, Jo herself — actor Camilla Luddington — weighs in on the theory — and she's not on board.

"Of course I think that we hear all the pairings — we have people who have different people they want to be together all the time," she says. I believe that [the Meredith/Alex theory] probably stems from a place of wanting Meredith to find somebody, and be happy again. Alex is someone — and he happens to be male — who makes her happy, and that she does love. But I’ve also always interpreted that relationship as [like a] sibling, and purely platonic."

Alex and Meredith represent an important kind of relationship that Luddington said rarely shows up among popular TV shows. "I enjoy seeing a relationship on a show that isn’t sexual between a man and a woman," she says. "I think it’s interesting and we don’t see it very often."

Luddington makes an important point. When is the last time a friendship as close, as loving, as enduring as Alex and Meredith's existed on TV between a man and a woman, and was focused on just as heavily as a romantic relationship? It's extremely rare, and that's a shame. In Alex and Meredith, many of us, including Luddington, see meaningful friendships in our own lives reflected. "I also have a relationship like that in real life. One of my best friends is a male, and it’s very platonic," she continues. "It’s a very special relationship to have ... I think it’s great that the show’s portraying that."

Besides, Meredith doesn't seem to be collapsing without a man by her side — not by a long shot. She's been without Derek for a while now, and she's still managed to perform groundbreaking surgeries and win a damn Harper Avery award, all while raising their children, thank you very much. Alex has always had a life of his own, too — it'd be a bit of a stretch for, after all these years, him to decide that he's suddenly in love with Meredith.

Jo and Alex are so much more than a passing fling, too. They've had their share of problems, but they haven't given up hope of being together. "I think that relationship can be messy, and I think that every relationship has their hurdles to jump over," Luddington says. "Communication is huge in relationships, and I think that’s something that people learn over time how to communicate better with each other, and I think that [viewers] can relate to those struggles that those two characters also have in their relationship."

Luddington thinks that, despite the ups and downs Alex and Jo have faced, in the end, they care about each other more than anything. "I think at the same time that [for] Alex and Jo at the end of the day, there’s just a lot of love between them," she says. "And I think that people enjoy watching that, and the simplicity of just two people being in love and struggling to make it work — kind of beating the odds in order to be together."

As the season returns on Jan. 18 at 8 p.m. ET on ABC, Jo will confront her abusive, estranged husband, even if it's not in the way she expected. Luddington hopes she comes away from that encounter able to simply live her life. "I’ve always wanted [Jo] to feel empowered and free, and you know, get rid of her demons, and [her estranged husband] is the ultimate demon for her," the actor says.

Hopefully after all is said and done, Jo will have found that freedom to pursue a future with Alex any way she wants — and Meredith will surely be cheering them on.