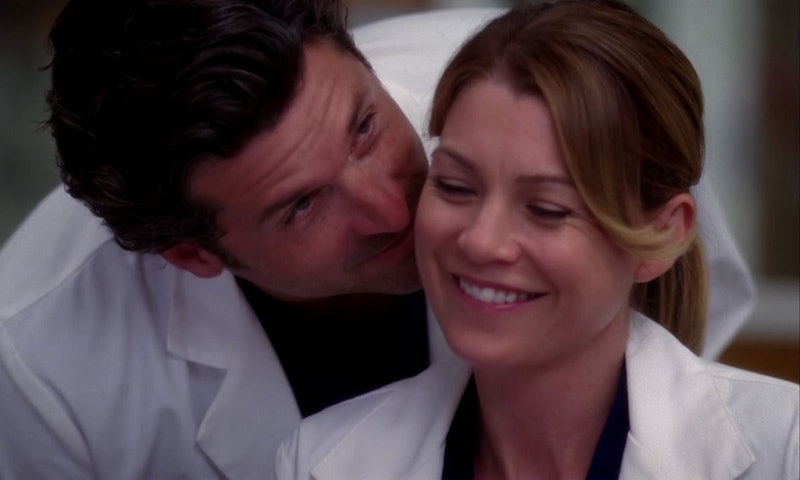 Meredith Grey and Derek Shepard's love story is one of the most enduring, heartbreaking loves on television. It's what kept fans coming back to Grey Sloan Memorial Hospital year after year — but were the show to have been created in 2018, Meredith and Derek's relationship on Grey's Anatomy would not have happened.

According to People, showrunner Krista Vernoff revealed that in the 15 years since the show became a cultural phenomenon, the way society views relationships between people who work together has changed drastically. "If you look at, for example, Meredith Grey (Ellen Pompeo) and Derek Shepherd (Patrick Dempsey) through the lens of Time’s Up and #MeToo, he was her boss, she was an intern, and she kept saying, ‘No, walk away from me,’" she said. "And he kept pursuing her, and that is probably not a story we would tell on the show today, and it’s a beautiful reflection of the changing times."

In fact, it was this different way of looking at Meredith and Derek's relationship that actually inspired a current storyline on the show, in which the widowed surgeon finds herself in a love triangle with the handsome resident Andrew DeLuca, played by Giacomo Gianniotti.

"This season, we’re doing a little bit of a reversal as we begin to build this love triangle that’s emerging with DeLuca as one the people in that triangle, and he is a resident and Meredith is an attending, and we’re having to address it differently than we ever would have before," Vernoff revealed.

She continued, "We're having to talk about and look at power dynamics. It is an ongoing conversation in the writers room. How do we tell that story in a way that feels honest and romantic and sexy and yet proactive and progressive?"

Of course, the issue of power dynamics and consent between co-workers is far from the first time that the show has been at the forefront of a conversation about women's issues and empowerment. In January, Pompeo revealed in an interview The Hollywood Reporter that despite being the star of Grey's Anatomy, she had been paid less than Dempsey for much of its run. However, ahead of Season 14, the actress managed to negotiate an astounding $20 million contract, making her the highest paid actress on a primetime drama.

In that same interview, Pompeo also reflected on the way that the Time's Up movement helped her to become empowered both in her fight for equality and as an actress working in Hollywood. "In the last few weeks, a lot of us actresses in town have been having these meetings [as part of the Time's Up initiative]. We've been sharing stories and trying to figure out how we can promote change and use our voices to help other people," she said. "And I'll tell you, sitting in rooms full of Oscar-winning actresses listening to how they've been preyed upon and assaulted is frightening. And it confirmed that my path really was the right one for me, because I've chosen to financially empower myself so that I never have to be ducking predators and chasing trophies."

The rise of the #MeToo movement and the Time's Up initiatives are just a few examples of how women have decided to fight back against sexism and predatory behavior in Hollywood and the world around them. By making sure that those changing values are reflected onscreen, Grey's Anatomy is showing how it understands the importance of women's voices and opinions now, in a way that feels both exciting and empowering. Even if it does mean that one of the show's most iconic couple might never have existed as we know it.