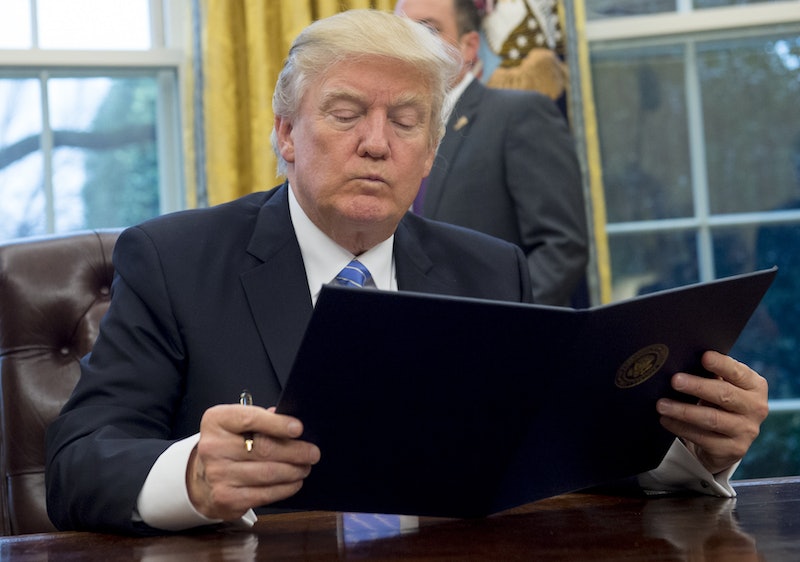 In the aftermath of the white supremacist rally in Charlottesville, Virginia, the violence that followed, and President Donald Trump's underwhelming responses, it seems Americans are taking to Google to try to make sense of all the conversations — literally. As the Merriam-Webster Dictionary noted on Twitter on Tuesday, people are looking up certain words after Charlottesville — words like "fascism," "neo-Nazi," "complicit," and "white supremacist" — to better understand what's going on right now.

As Merriam-Webster reported, there's generally been an increase in searches for definitions of words related to racism, the alt-right/white nationalist groups involved in the Charlottesville protests, and the distinctions between some of the terms frequently thrown out in the discourse about those events (and about the president).

In a blog post, the Merriam-Webster team wrote about one such divide, they described the differences between the terms "white nationalist" and "white supremacist." Noting that the two are still connected by the rhetoric of supremacy, they wrote:

[W]hite nationalist is defined as "one of a group of militant whites who espouse white supremacy and advocate enforced racial segregation," while white supremacist is "a person who believes that the white race is inherently superior to other races and that white people should have control over people of other races."

Also, taking note of President Trump's use of the word "repugnant," the dictionary also weighs in on the meaning and history of that word (and the spike in people looking it up.)

Per Trump's comments, he said:

Racism is evil and those who cause violence in its name are criminals and thugs, including the K.K.K., neo-Nazis, white supremacists and other hate groups that are repugnant to everything we hold dear as Americans.

While many found the president's eventual condemnation of neo-Nazis to be "too little, too late," the Merriam-Webster team can confirm that the highly searchable word (not unlike deplorable) is meant to be a pretty firm shut-down.

In modern use the word is most often encountered with the meaning of "exciting distaste or aversion." However, when repugnant first began being used in English, in the 15th century, it tended to carry the meaning of "characterized by opposition and especially contradictory opposition." The word also had the sense of "hostile, disposed to fight against something," before taking on its current meaning.

While Merriam-Webster is working overtime to unpack all of the buzzwords, it remains to be seen whether all this vocabulary-flexing research is in the service of making people more informed (and prepared to have difficult conversations) or if it's yet another means of normalizing a dangerous movement via terminology.