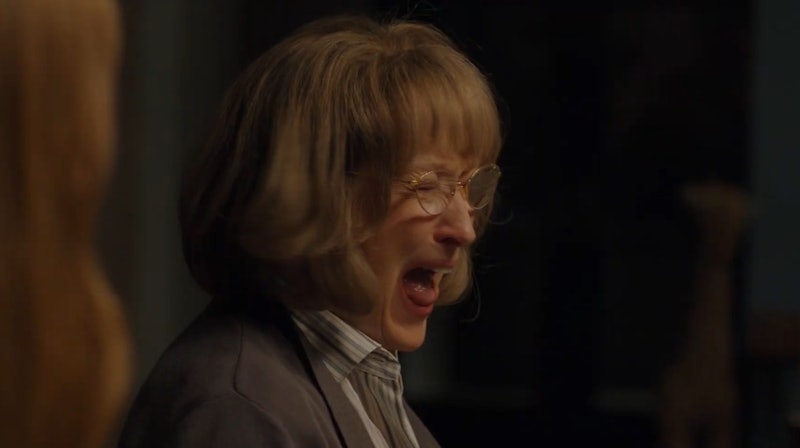 Although the shriek was music to nobody's ears at the time, Meryl Streep's iconic Big Little Lies scream was remixed into a new song by King Princess called "Mary Luiz (Plz Plz)." The track, which the singer dropped on July 30, begins with dialogue from Streep's BLL character Mary Louise in a dinner scene she shared with Celeste (Nicole Kidman) and her twin sons: "I just... I felt just as if I wanted to scream," she says in both the HBO series and on the track. "So you know what I did? I did scream. Wanna hear? OK."

The vocals in the minute-and-a-half "undeniably catchy techno banger" (as Billboard called it) come primarily courtesy of Mary Louise's showstopping moments from BLL Season 2. In addition to the repetition of Streep's grief-induced screaming, about halfway through the song, King Princess threw some more of the actor's lines into the mix: "We should scream! We should scream and beat our breast and tear our hair. Don't you feel angry?"

Along with the "Mary Luiz (Plz Plz)" cover art (a negative-filtered closeup of Mary Louise's face), the Brooklyn-born musician tweeted on July 30 that “this is a track very close to my heart and p*ss." She then included several shoutouts, saving the best for last: "Thank you to @ the real Meryl Streep for the feature.”

Later the same day, King Princess tweeted a video of herself dancing along to the song. As she joked in a caption: "I don’t mean to startle you with this news, but Meryl will be coming out at lollapalooza with me. during my set." (She's scheduled to take the stage on the opening night of the Chicago music festival.)

Of course, King Princess wasn't the only one inspired by Streep's performance. Immediately following — and even during — the BLL premiere episode's airing, Streep's scream spawned endless memes and hilarious Twitter reaction. The moment even had fans placing early bets that the BLL role will win Streep an Emmy.

"Just give her the Emmy," Jimmy Fallon joked to Shailene Woodley (who plays Jane on BLL) in a The Tonight Show Starring Jimmy Fallon opening bit on NBC in June. In total agreement, Woodley told the late night host that "it actually works" and "really helps get out stress."

After demonstrating, the actor added: "God it feels so good. Meryl taught me how to do it, and it's changed my life." She, then, shared the wisdom, showing Fallon how to do "the Meryl Streep scream." The Roots' Black Thought even joined in at the end.

"She's so wonderfully generous and immediately disarms you with her generosity. You sort of forget for a moment that you're working with a master of her craft," Woodley added of Streep during her Tonight Show interview. "Then the cameras start rolling, and she does the thing, and all of a sudden you go 'Oh god, what am I doing? I've got to get my stuff together.'"

In a separate interview on ABC's Good Morning America, Reese Witherspoon (BLL's Madeline) described her own feelings of Streep-inspired intimidation.

“The first day of the second season, I had to work with Meryl Streep — on the first day! — which is so exciting but also completely terrifying, and I think I barely got out words,” revealed Witherspoon. “She was like, ‘It’s OK.’ I had to literally go into another room and go, ‘Calm down, she’s just a person, she’s just a human being.’”

Streep's BLL scream moment, however, may have reminded everyone of the contrary: She is a superhuman force of nature.