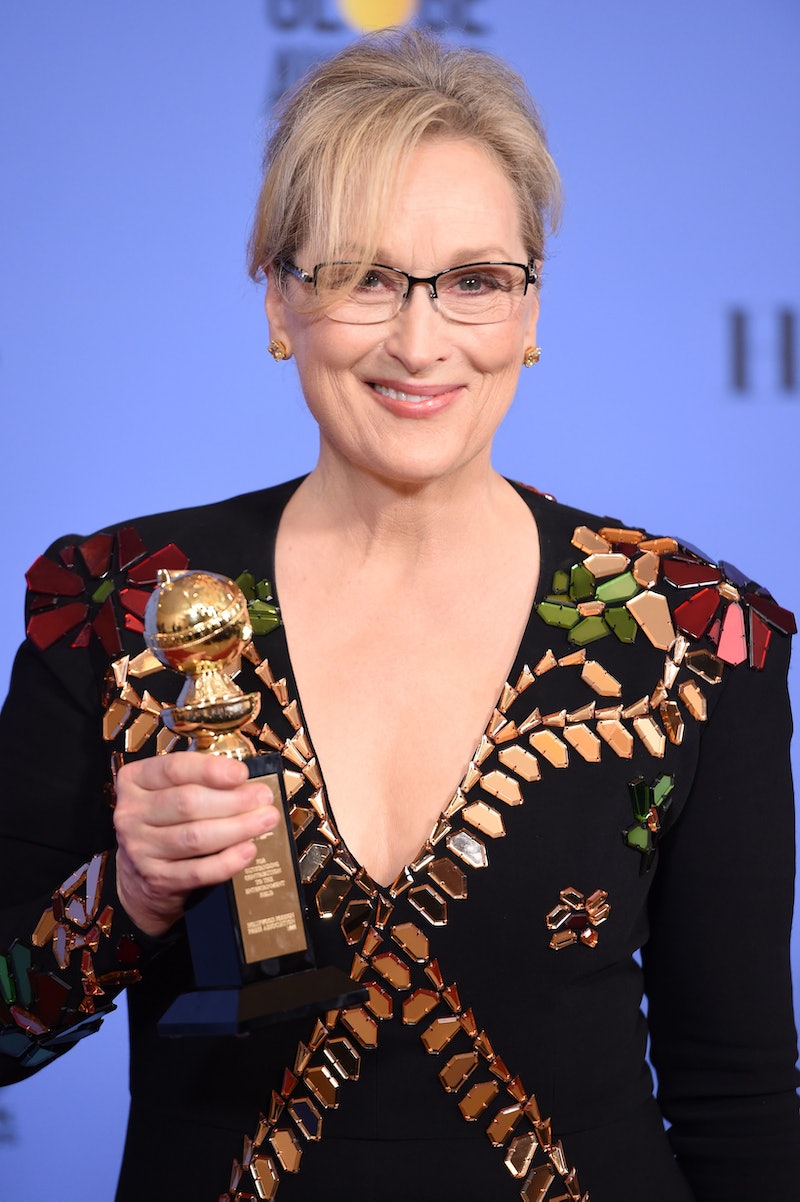 In case you somehow haven't heard, Meryl Streep gave a pretty impressive speech last night. At Sunday's Golden Globes, Streep was presented with a lifetime achievement award. But rather than thank a laundry list of people she loves, Streep used her acceptance speech to address a hurting nation.

Streep started off her speech by naming some of the actors in the room and the vast variety of their birthplaces, to show that Hollywood is as much of a melting pot of backgrounds and nationalities as America is. She went on to say that the most striking performance she saw all year was not in a movie or on TV, but President-elect Donald Trump's mocking of a disabled newspaper reporter at a rally in November of 2015. She urged people to be empathetic toward one another, and not let the president's rhetoric normalize and give permission to discriminatory or bullying behavior.

Streep's speech was eloquent and inspiring, and she exited the stage to a standing ovation. But that her speech was well-received at a Hollywood awards show means next to nothing in actually making headway in the areas she discussed.

Streep is an icon in the film industry. She is adored by just about everyone that was in that room. The majority of the Golden Globe attendees also presumably hold a pretty similar political ideology as Streep. The people who her speech was directed at, who needed to hear her words, were those who were probably not tuned in to the Golden Globes, and once they did hear what Streep had said, they immediately dismissed her as a whiny Hollywood elite.

That her speech didn't rub everyone the right way was immediately evident on social media. Trump supporters lashed out at Streep for her speech, which essentially just asked everyone to be nice to one another.

And Trump's response was a string of insult-ridden tweets, only strengthening the characterization that Streep laid out of him.

Streep's message is extremely relevant and significant in these times. Trump's behavior on the campaign trail, unprecedented for a modern presidential candidate, has been normalized by his victory. His supporters feel like they have permission, as Streep put it, to act the way that Trump has -- which is to say in a hateful, bullying way. To maintain the strides in civil rights and inclusiveness that so many have worked so hard to achieve, this can not be tolerated.

Streep's speech was a great catalyst, but she had the easy role. The real struggle comes when normal people like us have these conversations with people who don't want to listen to it. To put her words into action, we need to take these discussions outside of our comfort zones, and to the people who don't share the same beliefs. If we want to see any progress made, we can't keep speaking to rooms full of like-minded people.