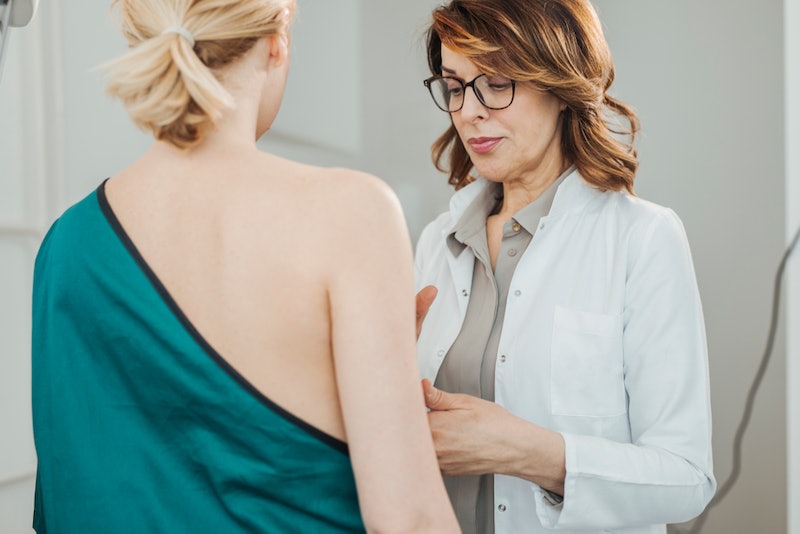 Breast cancer is one of the most common cancers; it can affect people of any gender, and statistics from the World Cancer Research Fund show that 2 million new cases were diagnosed worldwide in 2018. In 2019, 42,260 people in America alone will die of breast cancer, according to data from the American Cancer Society. While October is marked to raise awareness around this disease, one form of breast cancer is often ignored: Metastatic breast cancer, also known as Stage IV breast cancer, is the stage at which breast cancer cells invade other areas of the body.

"Metastatic breast cancer is cancer that has spread beyond the anatomic region of the breast to distant organs such as the lung, liver or bones," Dr. Damien Hansra, M.D., a medical oncologist at the Cancer Treatment Centers of America, tells Bustle. "It can be challenging to treat, since it is generally not curable."

Research by the National Cancer Institute from 2018 found that the number of people diagnosed with metastatic breast cancer in the United States is increasing, though people are also living longer with the diagnosis. Life with metastatic breast cancer, one woman living with the diagnosis tells Bustle, is devastating, and is also affected by misinformation and the fears of others.

The reality of metastatic breast cancer for patients themselves can be extremely difficult. Emily, an ambassador for the Breast Cancer Research Foundation (BCRF), was diagnosed with metastatic cancer two years ago at the age of 32, after initially being misdiagnosed as Stage II. "I was shocked and devastated," she tells Bustle. "I have a young child and am in my early 30s. These are not things that are on a lot of peoples' radar" when you think of people with metastatic cancer, she tells Bustle.

For Emily, getting diagnosed with Stage IV cancer was overwhelming. "You're getting a diagnosis that means you're staring down the barrel of a gun. You know to some degree that this is a disease that's going to kill you, and kill you pretty quickly, unless you're someone that makes it a little bit longer," she tells Bustle. "There have been some treatments that have stayed it for years, but the life expectancy still hovers around three years."

One in eight women in the United States will be diagnosed with breast cancer in the course of their lifetime, according to data from BCRF, which supports research aimed toward preventing and curing breast cancer. For women who develop metastatic breast cancer, the chance of survival over five years after diagnosis is 27%. For men, it's 25%.

In 2019, Emily saw significant progression of her cancer, including metastases to her bones, lymph nodes, brain, liver, lungs, bone marrow, and cerebral spinal fluid. "That's my life right now," she says. "I'm currently trying to work with my oncologist to find some clinical trials or nonstandard therapies, but there's not a lot."

Life with metastatic cancer, Emily tells Bustle, is made significantly more difficult by the fact that it's not given a great deal of research funding. "Metastatic breast cancer only receives about 7% of total breast cancer research funds," she says. "There are some organizations that are doing far more than that, and BCRF is one of them, but this is why metastatic disease is still lagging behind so much in its care."

"It's an unnecessary slap in the face for an already horrible death."

If a friend or family member has Stage IV breast cancer, Emily says, it may feel as if you have to be comforting — but realism is also necessary. "I get a lot of people who want to find the right words, or give me hope when that's not an appropriate thing," she tells Bustle. "I wish people would recognize more that they don't have to be the ones to say the profound thing. In these situations, there is nothing you can say that's going to make it better. There's nothing that's going to alleviate the pain of not seeing my son go to kindergarten."

The real help, Emily says, is in action. "You can offer to take me to an appointment, or bring us a meal, or make a donation to research. Call your congressperson and talk to them about developing a specific line item for funding for metastatic breast cancer so we're not fighting budget cuts that are going to trickle down into nothing," she tells Bustle. "Talk to them about issues such as drug parity, which makes drug types more readily available for people, and also the McSally bill, which would eliminate the waiting period for metastatic breast cancer patients who are applying for disability. At this point, most people die before they get disability approval, and they die in poverty. It's an unnecessary slap in the face for an already horrible death."

The fight to help those with metastatic breast cancer cannot stop when people with the illness pass away, says Emily. "It is so critical for us to have allies that are going to pick up the mantle," she tells Bustle. "If I die in six months, my voice is essentially gone."

More like this
6 Abortion Advocates To Follow On TikTok
By Sara Youngblood Gregory
How To Protect Your Digital Privacy If You Need An Abortion Post-Roe
By Kaitlyn Wylde
Are Cancer & Scorpio Compatible In A Relationship?
By Kristine Fellizar and Mackenzie Sylvester
The Do’s & Don’ts Of Cancer Season 2022
By Brittany Beringer
Get Even More From Bustle — Sign Up For The Newsletter