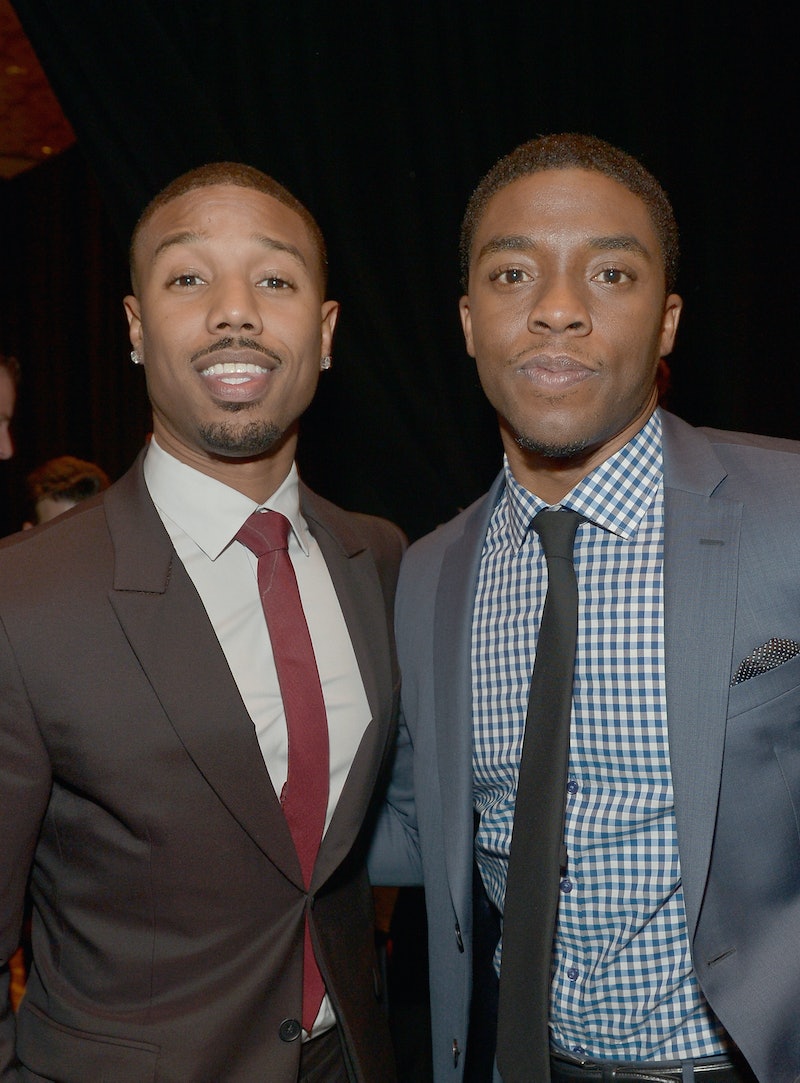 In a twist worthy of any good soap opera, it's been revealed that Michael B. Jordan and Chadwick Boseman played the same character on All My Children before they were famous. The Black Panther actors discussed their shared soap history in an interview for The Wrap's Oscar Magazine, and it turns out that even though they didn't work together back in 2003, Boseman did pave the way for Jordan to take their shared character in a less stereotypical direction. That ripple effect isn't lost on either of the actors. In fact, they told The Wrap that they hope Black Panther's success will have a similar effect for future actors of color who are just getting started in the business.

For the non-soap fans out there, Boseman originated the role of Reggie Montgomery on All My Children in 2003. According to The Wrap, after one week in the role as a troubled teen, he voiced concerns that Reggie played into negative stereotypes about young black men. Boseman told the outlet that his bosses at All My Children said he "was too much trouble" and fired him. A 16-year-old Jordan stepped into the role, and stayed with the soap until 2006. During that time, the character became part of the most influential family in Pine Valley before leaving for college.

So what changed? While Boseman was fired from the show, it seems that the soap took some of his advice to heart. "When I got it, I was like, 'This is not part of my manifesto. This is not part of what I want to do. How can I make it work?,'" Boseman told The Wrap of his experience. "Because with a soap opera, you don't know the full scope of what's gonna happen — you don't know where they're gonna take the character, because they don't always know where the character is going. And because of that, there's possibly room for me to adjust this and change it and make it so it's stereotypical on the page but not on the screen."

At the time, Boseman was 26, and his career was just starting out, but his fearlessness in speaking out about Reggie being written in a way that he wasn't comfortable with may have helped pave the way for Jordan's take on the role. As the character progressed, he was adopted by the Montgomery family where he became a protective cousin, loyal son, and a teen with a sweet love story.

Jordan credits Boseman for making the writers see a better path for the character, and he expressed his gratitude for his Black Panther co-star speaking out. "I'm younger than Chad, and I was coming into All My Children fresh off The Wire — wide open, still learning," Jordan explained. "I was playing this role not knowing that a lot of the things I was going through were because of what he'd already done for me."

Fast-forward to 2018, and the actors ended up starring together in one of the biggest superhero movies of all time. Black Panther smashed records and expectations to become a cultural phenomenon. Now Jordan hopes the Marvel film will have the same impact on the lives of future actors, as Boseman taking a stand on All My Children did for his early career.

"It's hard to speak in the moment about how things we do can affect other people. But this is a pure example, right here on the spot — we ain't never talked about this before a day in our lives — to understand how what people do now can directly affect what other people do in the future," Jordan said to The Wrap. "And the work that we're doing on Black Panther is hopefully doing the same thing for the next group of actors that are coming up, just like our predecessors opened up doors and made things easier for us."

The Hollywood serendipity that connects Boseman and Jordan is more than just a fun fact. As Jordan so perfectly explained to The Wrap, it's a reminder of how positive actions can lead to change — and of how these superstars' careers were intertwined long before they paid a visit to Wakanda.