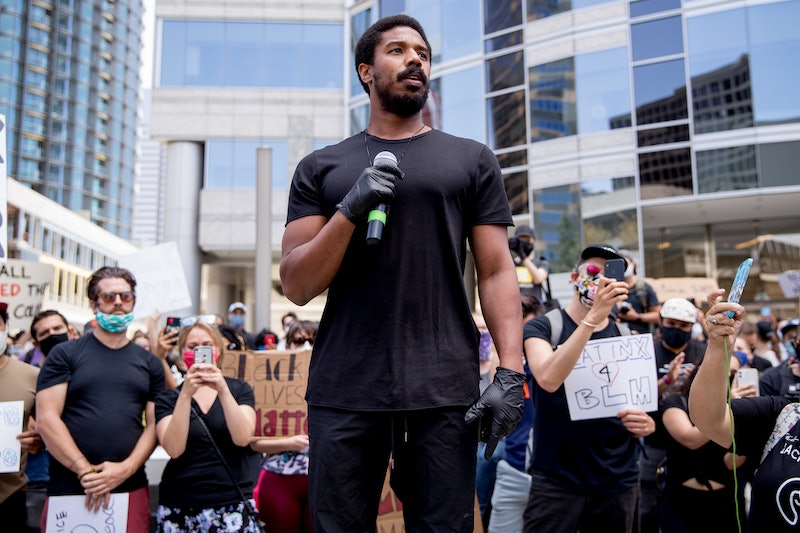 Attention all entertainment industry officials: Michael B. Jordan called on Hollywood to commit to Black hires in a speech at a Black Lives Matter protest. As rallies continue to be organized across the globe following the death of George Floyd, the Black man who died while pinned under a white police officer in Minneapolis, Jordan joined protesters in Los Angeles on June 6 and called on studios to mobilize in the wake of the Black Lives Matter rallies. He told the crowd, "I have used my power to demand diversity, but it's time the studios, the agencies... do the same.”

Per a clip shared on Twitter, Jordan said, "You committed to a 50/50 gender parity in 2020. Where is the challenge to commit to Black hiring? Black content led by Black executives, Black consultants? Are you policing our storytelling as well? Let us bring our darkness to the light." The Just Mercy actor continued, "Black culture, the sneakers, sports, comedic culture that you guys love so much — we've dealt with discrimination at every turn. Can you help fund Black brands, companies, leaders, Black organizations?”

Jordan then urged the crowd to vote, an action that has “never been more important than it is today.” He also admonished complacency and said, “What we are doing today will make our values heard and our voices heard. We’ve got to keep agitating things. We can’t be complacent.” Jordan added, “We can’t let this moment just pass us by. We have to continue to put our foot on their necks.”

The speech comes after Warner Bros. announced on June 1 that Jordan’s 2019 legal drama film Just Mercy will be free to rent all June across various U.S. digital platforms in the wake of Floyd's death. Inspired by a true story, the film follows the work of civil rights attorney Bryan Stevenson (Jordan), a Harvard graduate who represents the marginalized and wrongfully convicted. His first case centers on Walter McMillian (Jamie Foxx), a man sentenced to death for the murder of a teen despite evidence that proves his innocence. The film sheds light on the racism and legal and political barriers that he faced in his effort to clear Walter’s name.

Prior to his speech, Jordan echoed the same message of mobilization in an Instagram post about police brutality on May 29. “This country was built on the backs of our ancestors — backs that had a target the entire time and this month is no different with more black lives caught in the crosshairs,” he wrote. “Too many look at us as public enemies, only some see us as humans, and yet we need to be superhuman just to survive.” He concluded, “We must strategize, organize, and train ourselves as we demand more... This is just the beginning.”

More like this
Pamela Anderson’s Dating & Marriage History Could Be Its Own TV Series
By Jake Viswanath
At 28, Rosie Perez Risked Her Career To Stop Playing Stereotypes
By Gabrielle Bondi
Here’s Everything Coming To & Leaving Netflix In February
By Jake Viswanath
Rupert Grint Just Shared A *Major* Update About Ron Weasley’s Future
By El Hunt
Get Even More From Bustle — Sign Up For The Newsletter
From hair trends to relationship advice, our daily newsletter has everything you need to sound like a person who’s on TikTok, even if you aren’t.