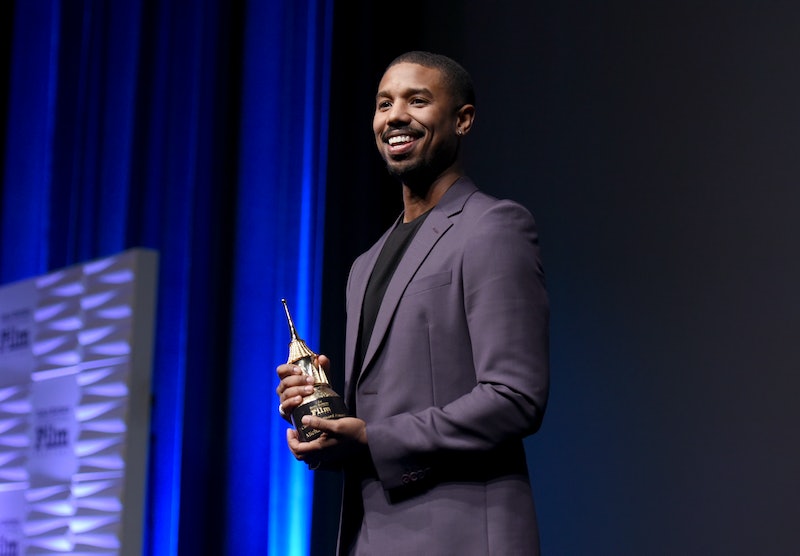 Michael B. Jordan has made a name for himself by starring in some great movies. From Oscar Grant in Fruitvale Station to the villain Killmonger in Black Panther, he makes an impression every time. And it looks like he made a lasting impression on Queen Bey too because Beyoncé and JAY-Z came to Michael B. Jordan's birthday party to celebrate with his friends, and yes, that does sound like one of the biggest honors, ever.

According to Entertainment Tonight, in celebration of his 32nd birthday, Jordan and his friends had a party at Delilah in West Hollywood, California on Feb. 8. There are screenshots on Twitter of a list of celebs that were reportedly at the party including stars like Zendaya, A$AP Rocky, Drake, and Amber Rose. Meek Mill was also there along with Terrence J, Machine Gun Kelly, and Jeannie Mai, according to ET.

But the biggest guests had to be Beyoncé and JAY-Z. And even Jordan got starstruck. He even documented the moment with an Instagram post, just captioning it with the clapboard, bee, and crown emojis, probably referring to him being an actor (film clapboard), Beyoncé and her Beyhive (bee), and JAY-Z being a leader, or "king," in his field (the crown).

He also commented on his own photo, writing: "Y'all I'm still new to this famous thing don't know my cool faces yet... I'll take notes from the king & queen!" Despite what he might have thought of his face in the original picture, Jordan can rest assured that it just oozes coolness.

Some fan pages for the actor have screen recordings of toasts and other happenings from the party, and it seemed like a get-together full of Jordan's biggest supporters. One video is of a toast at his party, with the speaker saying, "May this year be another amazing addition the amazing year you've been having, and may you continue to be as successful, and as prosperous, and may all your dreams come true." The next slide is everyone singing him, "Happy Birthday."

Of course, fans of both Jordan and Beyoncé were out-of-their-minds excited about the two being photographed together. From support and love to others being blown away by the sheer power of the image, it's safe to say fans were delighted that Bey and JAY-Z were there to celebrate his 32nd birthday with him.

This is only one more big event Jordan has going for him in a week full of good news for the actor. On Feb. 7, he received the Cinema Vanguard Award from the 2019 Santa Barbara Film Festival. As reported by the Noozhawk, SBIFF Executive Director Roger Durling said it was honor to select Jordan as the recipient of the award. "It's thrilling to honor Michael B. Jordan this year for the emboldened way he's shown us what it means to be a movie star for the 21st century, mixing sensitivity with swagger and choosing important material that is full of integrity..."

It was also announced on Feb. 9 that Jordan will executive produce 61st Street with AMC, a Chicago-based series about a "a promising high school athlete, who is swept up into the infamously corrupt Chicago criminal justice system," according to The Wrap. It was described as an "emotional and audacious piece of drama that is as timely as television gets," in a statement from AMC president of programming, David Madden.

With this new project and honors, not to mention his killer birthday party, there's no doubt that Jordan's 2019 is off to a great start.