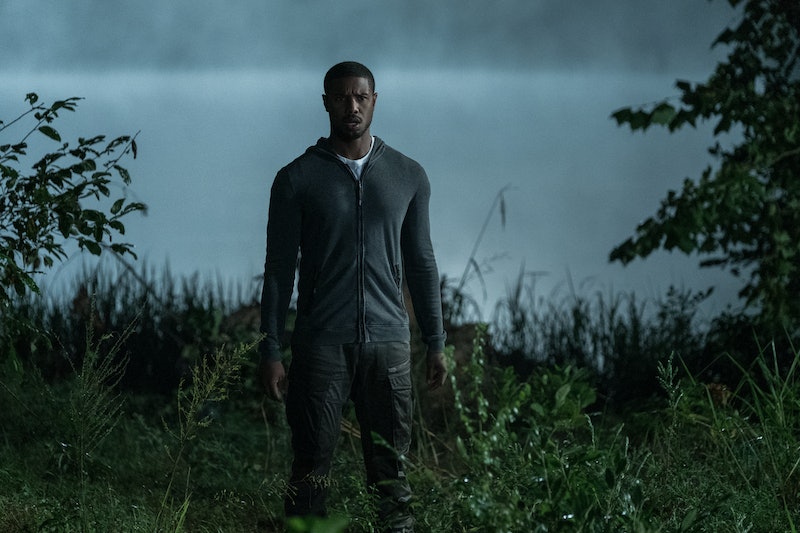 Spoilers ahead for Raising Dion Episodes 1-5. Even though Michael B. Jordan's Raising Dion character, Mark Reese, is dead, the actor still has a major presence throughout the show. He plays the late husband of single mom Nicole (Alisha Wainwright), who discovers that her young son Dion (Ja'Siah Young) has superpowers — and that Mark had them too. Not only that, but Mark might still be alive.

Initially, second-grader Dion (Ja'Siah Young) has a difficult time remembering his father and doesn't even know how he died. After some encouragement from Mark's pal Pat (Jason Ritter), Nicole caves and tells Dion what happened to his dad. Mark, a scientist and storm chaser for the company BIONA, was in New Orleans for work when he got caught in a hurricane and saw a woman named Charlotte Tuck struggling in the water. He saved her life, but ended up losing his own. "That's what heroes do, right?" Nicole tells Dion. Considering he had superpowers, Mark was more of a hero than Nicole even realized.

Later, Nicole discovers that Charlotte wasn't much of a stranger. Back in 2010, she and Mark both gained abilities from a solar flair during an aurora borealis in Iceland. Four years afterward, Mark began developing the power to teleport, but kept it a secret from Nicole to protect her — something Pat notes many superheroes in comic books have done before him. Mark died when something in a lightning storm (aka "Lightning Guy") attacked him, and Charlotte and Mark got sucked into the storm by the electrical currents.

However, Mark's body was never found, and as Dion develops his own abilities, his dad continues to appear in the thunderstorms apparently connected to his powers. In the first episode, Mark and others show up as ghostly apparitions during a thunderstorm at the family's lake house. Mark's figure communicates directly with Nicole, warning her to take Dion and flee the storm. He returns again in "Days of Mark's Future Past," his body hovering over his sleeping son. Then, Nicole sees the Lightning Guy suck Mark back into the storm.

In the past, Mark told Nicole, "I just always dreamed about being able to sit in the middle of a storm and play with lightning." But now it seems he's trapped inside one by this evil lightning force, and it's holding him and the other people with powers hostage.

However, he could be figuring out a way to escape — at least, that's what conspiracy theorist Wendy, who posted a video of Lightning Guy, believes. "I think the people inside the storm were abducted by some malevolence force, unable to break free," Wendy tells Nicole in the fourth episode. "But you see this one over here, away from the others? That burst of light? Something or someone is trying to break free."

Wendy had some unique views that Nicole discounted, but this theory seems to be right. Now, it will be up to Dion to not only stop himself from getting sucked into the storm, but possibly help the others who have already been taken — and bring his dad back home.