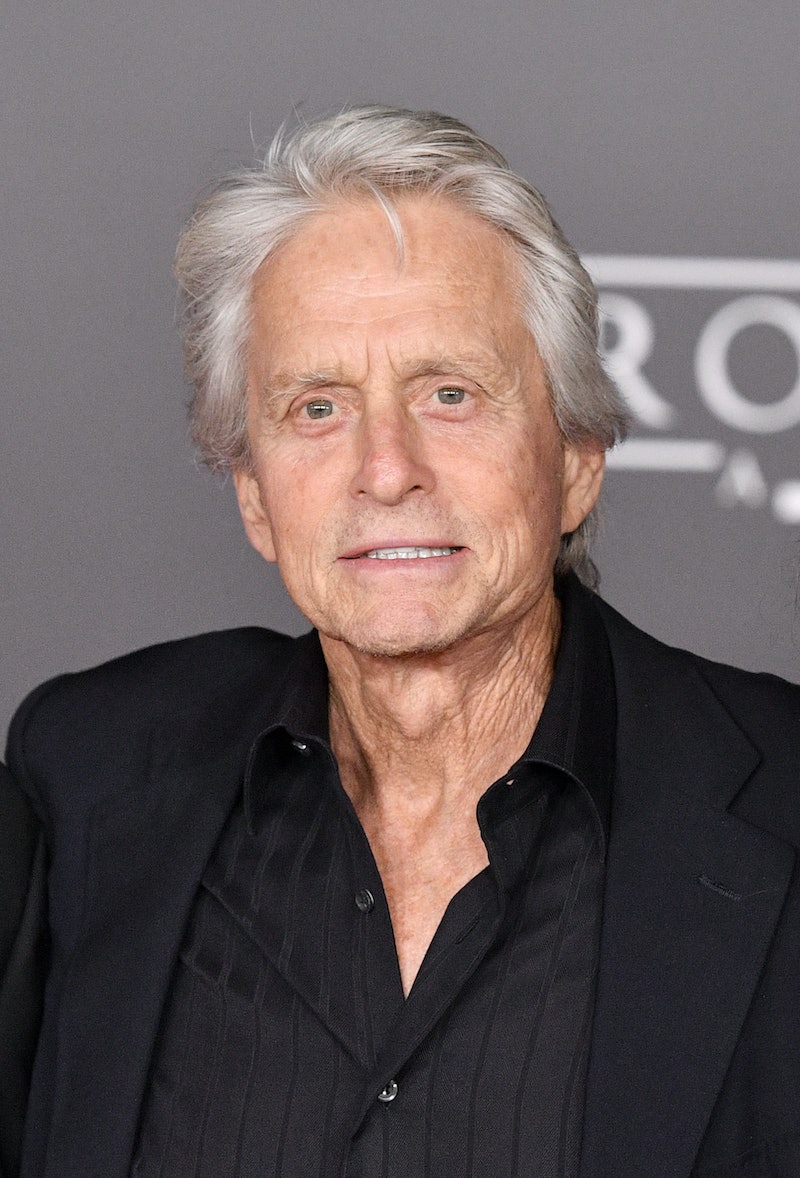 The second half of 2017 was filled with sexual assault accusations in Hollywood, and even in the new year, those claims continue. In a new exposé published by The Hollywood Reporter, writer Susan Braudy has accused Michael Douglas of sexual harassment while she was working for his production company, Stonebridge Productions, claiming that he once masturbated in front of her.

Douglas denied her claims in a statement to THR, which reads:

This individual is an industry veteran, a senior executive, a published novelist and an established member of the women's movement — someone with a strong voice now, as well as when she worked at my company more than three decades ago. At no time then did she express or display even the slightest feeling of discomfort working in our environment, or with me personally. That is because at no time, and under no circumstance, did I behave inappropriately toward her.

UPDATE: A lawyer for Douglas released the following statement to Bustle on the actor's behalf

Throughout my career, I have staunchly supported the empowerment of women — in our industry, the workplace, and in life. I have employed and worked with hundreds of female executives and artists, and strived at every turn to treat these professional colleagues with unfailing respect and dignity. My 50-year record and reputation clearly attests to this.

For that reason, and even amid the current charged environment, I will not sit silently and allow unfounded and utterly baseless allegations from a former employee go unmet or given credence.

This individual is an industry veteran, a senior executive, published novelist and an established member of the women’s movement — someone with a strong voice now and when she worked at my company more than three decades ago. At no time then did she express or display even the slightest feeling of discomfort working in our environment, or with me personally.

That is because at no time, and under no circumstance, did I behave inappropriately toward her. Coarse language or overheard private conversations with my friends that may have troubled her are a far cry from harassment. Suggesting so does a true disservice to those who have actually endured sexual harassment and intimidation.

Having now made clear this is an unfortunate but complete fabrication, I do not plan to comment further.

EARLIER: Braudy claimed to THR that when she worked for Douglas in the late ‘80s, he frequently used sexually charged and profane language around her, including vivid descriptions of his time with a mistress and demeaning comments about Braudy, as well. She also alleged that he masturbated in front of her during a meeting in his apartment while they were brainstorming a character similar to E.T. She claimed to The Hollywood Reporter:

“Michael unzipped his chinos and I registered something amiss. Still complimenting my additions to our E.T. imitation, his voice lowered at least half an octave. I peered at him and saw he'd inserted both hands into his unzipped pants. I realized to my horror that he was rubbing his private parts. Within seconds his voice cracked and it appeared to me he'd had an orgasm.”

She also claimed that Douglas made lewd comments to her, including the following alleged situation:

"One screenwriter I hired asked if he could bring his daughter to meet Michael. She asked Michael for a banana. Michael strode to me and said so that only I could hear, 'Yes. And then you can tell your friends you licked Michael Douglas' banana.' I was appalled."

During a Friday morning appearance on the Today show, Braudy said that at the time, she was afraid to speak out and that her friends were “frightened” for her.

In Douglas’ interview with Deadline, he explained why he wanted to refute the story before it was published, and that he does not think more accusers will come forward. “I felt the need to get ahead of this,” Douglas said. “It pertains to me but I’m also getting a sense of how it reflects in our culture, and what is going on today. I see it as a cautionary tale.” He also added that after researching Braudy, he feels that she’s trying to get a book deal by sharing her allegations against Douglas. He said:

“The woman, it turns out, is a blogger. We’ve had to do some quick research, and she has mentioned my name sometimes in her blogs. Nothing terrible. It leads me to believe she either has or is trying to get a book deal. I can’t believe that someone would cause someone else pain like this. Maybe she is disgruntled her career didn’t go the way she hoped and she is holding this grudge. It has caused tremendous stress to me for something I believe I have nothing to regret or feel responsible for.”

But in the THR story, Braudy said Douglas’ “pretext of victimization” is part of the problem, adding that the reason she took so long to open up about her claims is because it was only recently that she found the courage. “These are some reasons why so many women don't come forward with their stories,” Braudy said. “Lord knows it's taken 30 years and a movement for me to gather my courage.”