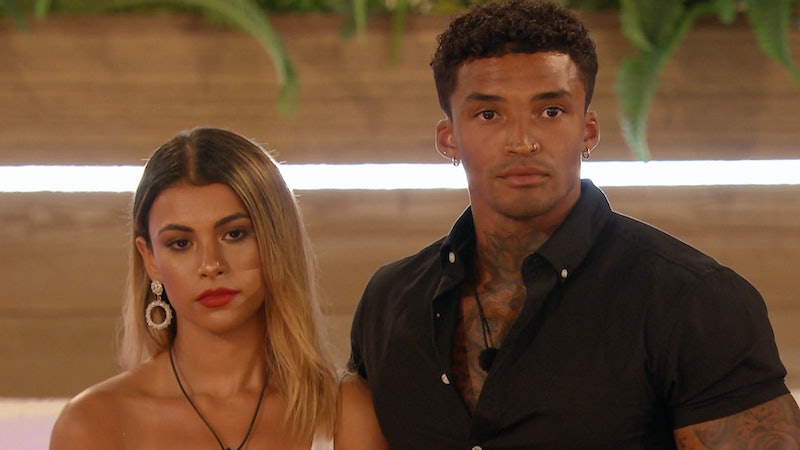 Last night was probably one of the hardest episodes of Love Island viewing this season. I know Love Island's Casa Amor is all about stirring up drama by bringing new boys and girls into the villa and seeing if any of the original islanders heads will be turned, but Michael is the last person I thought would be having relationship doubts. Here is why Michael's behaviour is proof of how important honesty and communication is in order for a relationship to succeed.

Michael and Amber had already won the whole show in my eyes. I'd ordered my bridesmaid dress and practically flung the £50,000 prize money at them. The two started off their relationship slowly. Amber didn't pursue him. In fact, she made sure the graft was hard — much like anyone protecting their heart. And then it was pure bliss, cute dates, cuddles, the occasional rustling bed sheets. Nothing about their relationship led me to believe either of their heads could be turned. They bickered once or twice, but what couple doesn't?

Then queue Casa Amor. Before you know it, the man has pied off Amber, recoupled with a new girl, and blamed it all on Amber behind her back in the space of 0.5 seconds. But how on earth did we get here?

I was sure Michael would be a "loyal babes" up until the bitter end. But last night, in a wishy-washy attempt to justify his wayward actions, he revealed his true feelings about Amber to Curtis: "How can she be hurt when I'm not her type?" C'mon Michael — do you even believe the words coming out of your own mouth? "She made that very clear, if anything I tried with her, she gave nothing back," he said. Meanwhile Amber in the other house is cluelessly telling the girls about how much she likes Michael and how she "eventually started opening up" to him. All things I've watched with my own eyes.

Yet, according to Michael, he was unhappy, Amber was "childish", and ultimately he did not feel he was being honest or true to himself. I find it interesting that all these feelings manifested and bubbled over the second six new beautiful women walked through the door. In fact, Michael spoke with new girl Joanna about his make-believe relationship tensions with Amber more than he did with Amber. Where is the communication? Why didn't he tell Amber his thoughts? Why did he lie to everyone, including himself?

This leads me to ask: was ever serious about Amber in the first place, or did he just need to find some shoddy excuse to crack on with a new girl? Or, alternatively, does he simply lack the emotionally maturity to be honest with Amber about his feelings? In all honesty, I think it was a combination of all of those reasons. Nobody is saying you can't like someone else, or have a change of heart, but it's the way he went about it that was so hard to watch.

It's quite hilarious that Michael's main imaginary gripe with Amber is how immature and childish she is. Yet he has proved his own immaturity by being incapable of honesty, communication, or remorse for the once woman of his dreams.

More like this
Why Gemma Owen’s Mum Louise Might Not Be Luca’s Biggest Fan
By Frances Stewart
Michael Owen Has Shared His Thoughts On Luca & Gemma
By Bustle UK
The Love Island 2022 Reunion Drama, Explained
By Sophie McEvoy
7 Cracking Quotes From 'Love Island' 2022
By Frances Stewart
Get The Very Best Of Bustle/UK