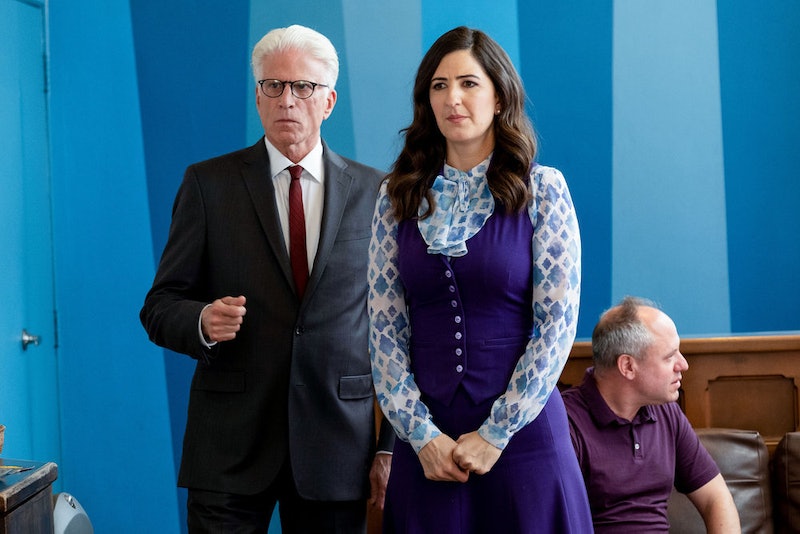 Spoilers for The Good Place Season 3, Episode 3 ahead. Well, if Michael's Good Place experiment wasn't already ruined, it certainly could be now. Throughout the show's third season, the demon-turned-softie has been determined to help Eleanor, Chidi, Jason, and Tahani do well enough on Earth to earn a spot in heaven. But his meddlesome behavior may have just exposed his biggest secret — the fact that The Good Place even exists.

In Thursday's episode, titled "The Snowplow," he opened the portal to The Good Place and Eleanor and her friends saw him do it. "What the hell is that?" Eleanor asked after stumbling upon the giant, out-of-place door and its swirling, electric blue portal. "Ooh, hey guys. What are you doing down here?" a flustered Michael sputtered in return. The episode ended there, but it's not hard to imagine that next week will pick up right where we left off, and Michael has a lot of explaining to do.

For one, both he and Janet have already appeared to the four humans various times over the past few months. Now that they're both together in one room, Eleanor and the gang could put two and two together and realize that they've already met this suspicious pair — and when they were posing as other people, no less.

But, whether they recognize Michael and Janet or not, explaining away the portal is a whole other story. How is Michael going to talk his way out of this one when all four of the humans witnessed the door to the afterlife opening? Eleanor, in particular, is going to be hard to fool because in every Good Place timeline, she was always the first to figure out they were actually in The Bad Place. She's much smarter than anyone gives her credit for.

If the humans do discover the Good Place exists, they'll go back to trying to be better people just to avoid winding up in hell, which would totally throw off the experiment. (Although it's basically out the window at this point, since Michael's been interfering for months.)

The only way Michael can get out of this mess he's created is to follow through on the plan he had before Eleanor and the group even walked in. He wanted to reset Earth's timeline and bring the gang together to study ethics even sooner. Janet and Michael don't actually know how to do that, but they were just about to travel through the portal to the Judge's room when they were caught. Michael could leave the flabbergasted group, go through the portal, reset the timeline, and then none of the humans would remember discovering his secret.

Of course, it's not necessarily that easy. The Judge knows Michael has been disobeying her orders to stop meddling. If she catches him trying to reset the timeline, she could thwart his plan, leaving Eleanor and the others on Earth to go about their lives just knowing about this super weird portal. It might not ruin Michael's experiment entirely, but it definitely wouldn't help his case.

Moral of the story? Michael needs to learn to let the group go and stop trying to fix things, because he's only making them worse, and this could be his biggest mess up of all. Only time will tell if he can talk his way out of this one.