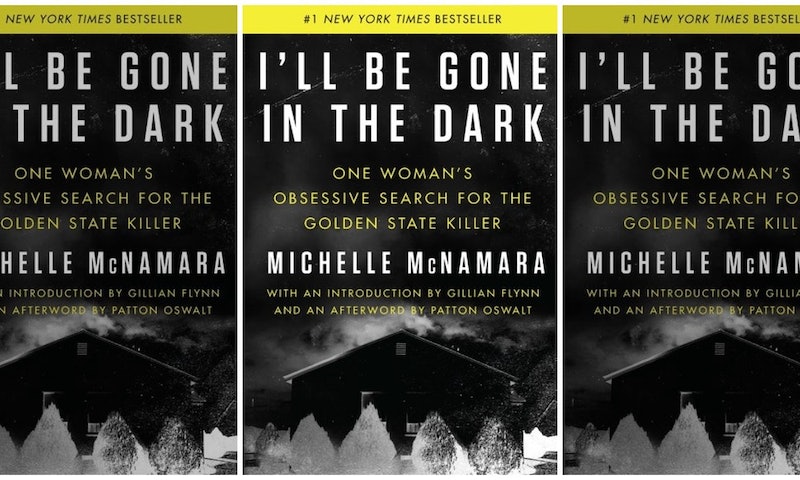 When I received a review copy of Michelle McNamara's true crime novel I'll Be Gone in the Dark, I knew it was a mistake to open it. I was living alone for the first time, in an unfamiliar apartment, and this book had "nightmare fodder" written all over it. But my curiosity tugged at me, and I couldn't resist: I read the book. And it affected me more deeply than I could have predicted.

I have read and watched plenty of true crime stories in my life. I love to dig deep into disturbing crimes, and pick apart clues to try to figure out what happened. But I had always been able to compartmentalize. Even though part of the appeal of true crime is that, well, it's true, there was always a part of me that still processed these books and podcasts and documentaries as... stories. Those horrible things had happened to other people, in other places. It would never happen to me.

But McNamara's empathetic writing brought the experiences of the victims to the forefront. While many true crime pieces get caught up in the facts, McNamara had a knack for taking you into the hearts and minds of the people who were terrorized by the Golden State Killer. She brought out the human consequence of the perp's crimes: the gut-wrenching fear and the lasting pain that resulted from this violence.

She showed the families of the victims, cleaning up blood that had been splattered everywhere during their brutal slaughter. She talked with the surviving victims and shared their stories. She took you into the very moment of the crime, imagining what it would be like to wake up with a light shining in your face and a man on top of you, snarling that he'll kill you if you don't do as he says.

In I'll Be Gone in the Dark, the case was more than just a puzzle or a series of unanswered questions. It was about real people, whose bodies, homes, and feelings of security had been violated in a gruesome way.

The wall that had been put up in my mind was shattered.

It wasn't just the murders themselves, but also the descriptions of the perp stalking his victims beforehand. He prowled through their neighborhoods, lurked beneath their windows, broke into their homes. I grew up in a suburban, residential neighborhood in Texas, and while the Golden State Killer committed his crimes in California, the setting felt eerily similar.

My neighborhood had always seemed safe to me. It had only two entrances, each leading out onto the same street. Throughout my childhood, I had never been allowed to pass those entrances without an adult. There was this feeling that beyond them, anything could happen. But here, in the neighborhood, I was safe.

I'll Be Gone In The Dark by Michelle McNamara, $23, Amazon

But then I read I'll Be Gone in the Dark, and I envisioned the Golden State Killer creeping around my neighborhood. When McNamara described him vaulting over fences into backyards, I pictured my backyard and my neighbors' backyards. I could envision him sitting underneath the ledges of my windows, crouching behind the bush in my front yard. There was knowledge thrumming through my body: This could happen in my neighborhood, too.

And it made it worse that he had targeted couples, as well. Often, my feeling of safety is directly tied to the knowledge that there is someone else in the house with me. But that never deterred the Golden State Killer. He was confident. He would continue to break in even as people were calling the police. And here I was, alone.

I started having trouble sleeping. I would lie paralyzed on the bed, convinced that I was about to feel the weight of the Golden State Killer on me. I was convinced that his flashlight would click on any second and blind me. Eventually, after lying in fear for hours, I would work up the courage to get up and turn on the light. I always expected that someone else would be in the room with me.

This lasted for weeks. Surely, I thought, it would get better when I went home for the holidays and was no longer living by myself. But of course, my neighborhood had lost that sense of safety. It no longer mattered that I was in my familiar home with my family all around me. The Golden State Killer was fearless.

My anxiety about the Golden State Killer was now mixing with some seriously bad jet lag. I would spend the day on-the-go and exhausted, but when I would finally get back to my bed at night, the fear would creep in again. Something in me was certain that, even though he had been inactive for decades, the Golden State Killer was just waiting to get me.

Today, authorities arrested a man suspected to be the Golden State Killer. Of course, giving me insomnia is the very least of his crimes. But, I for one, am certainly going to sleep easier knowing he's behind bars.

More like this
The 'Lady Chatterley's Lover' Book Leaves Us With A Troubling Question
By Catharina Cheung
David Tennant’s Transformation In ITV’s 'Litvinenko' Is Astonishing
By Sophie McEvoy
The 'Firefly Lane' Book Ending Teases Way More Tears To Come In 2023
By K.W. Colyard
Allie Rowbottom Will Have Her Feminism With A Side of Botox
By Samantha Leach
Get Even More From Bustle — Sign Up For The Newsletter