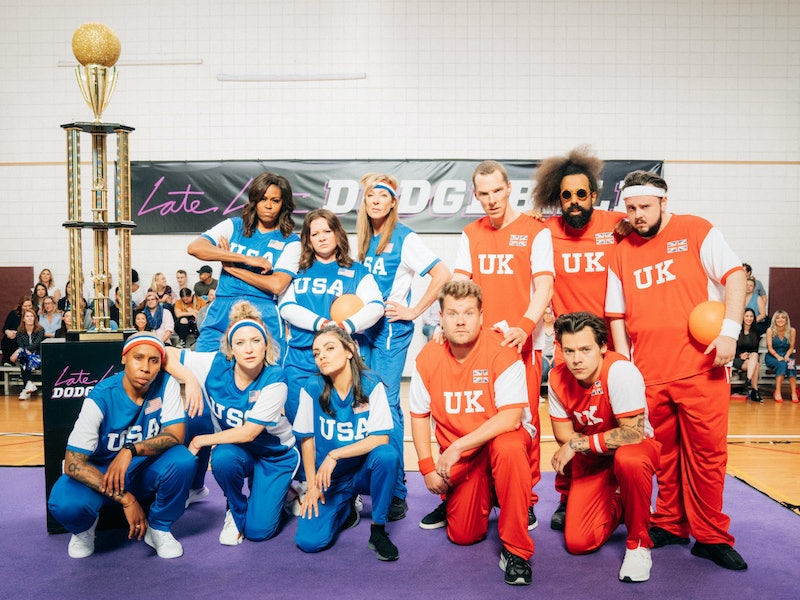 This lineup is better than any dodgeball match you participated in during elementary school. First Lady Michelle Obama will play dodgeball on The Late Late Show with James Corden alongside other celebrities, including Benedict Cumberbatch and Lena Waithe, in an upcoming Monday, June 17 episode of the CBS late night show. The former first lady will lead Team USA against Corden's Team UK in perhaps the most epic game of international dodgeball ever. Obama's all-female teammates include Waithe, Melissa McCarthy, Allison Janney, Kate Hudson, and Mila Kunis, while Corden’s all-male teammates include British stars Harry Styles, Cumberbatch, John Bradley, and Corden's Late Late Show bandleader Reggie Watts — the only American in a sea of Brits.

Corden took to social media on Monday, June 10 to tease the upcoming match with a photo op of the competing teams. In the photo, Team USA is donned in blue jerseys while Team UK is wearing red jerseys. Corden captioned the picture in appropriate all caps lock text: "USA: OBAMA, JANNEY, McCARTHEY, WAITHE, HUDSON, KUNIS vs UK: CUMBERBATCH, WATTS, BRADLEY, STYLES, CORDEN." A formidable dodgeball trophy looms behind Waithe in the photo. Meanwhile, McCarthy and Game of Thrones' Bradley are both holding dodgeballs. Something tells us this will be even more intense than the Battle of Winterfell.

The dodgeball match will kick off a week of The Late Late Show’s episodes being filmed in London. Corden, who originally hails from the UK, will film a few episodes from Central Hall Westminster during the show's week-long residency. In addition to the match, Corden will be joined by a series of other big stars for sketches and segments during his week in London. Chris Hemsworth, Gillian Anderson, Sophie Turner, Jessica Chastain, and James McAvoy are just a few of the celebrity guests slated to join the late night host for episodes in London. The show's UK residency will also feature musical guests Mumford & Sons and Little Mix.

Among the sketches viewers can expect to see is "Crosswalk the Musical." Corden is slated to make a trip to Paris for a segment of the show's recurring sketch, which follows Corden and a slew of celebrity guests as they put on a musical on the busy Los Angeles intersections near his CBS studio as drivers are parked at a red light. When the light turns green, Corden and company quickly disperse back to the crosswalks. In Paris, Corden will film a Les Misérables rendition of "Crosswalk the Musical" in front of the city's iconic Arc de Triomphe. Considering how chaotic the tourist-filled intersection can be, Corden will definitely have his work cut out for him.

This isn't the first time The Late Late Show has crossed the pond for a London residency. Corden has already brought his show back to his home country for two years in a row; memorable sketches have included a "Carpool Karaoke" segment with Paul McCartney and a "Crosswalk the Musical" segment on London's West End. Given Corden's opponents of iconic women, it's safe to state that the upcoming dodgeball match won't parallel the serene experience of singing with a former Beatle. Will Corden be able to avoid the dodgeball crossfires of America's beloved former first lady? The tournament can't come soon enough.

More like this
Everything To Know About Taylor Swift’s 10th Studio Album, 'Midnights'
By Grace Wehniainen and Jake Viswanath
Everything To Know About 'RHONJ' Season 13
By Brad Witter and Jake Viswanath
The 'Reasonable Doubt' Cast Includes A 'Save The Last Dance' Reunion
By Grace Wehniainen
Twitter Is Freaking Out Over Rihanna’s 2023 Super Bowl Halftime Show Announcement
By Stephanie Topacio Long
Get Even More From Bustle — Sign Up For The Newsletter