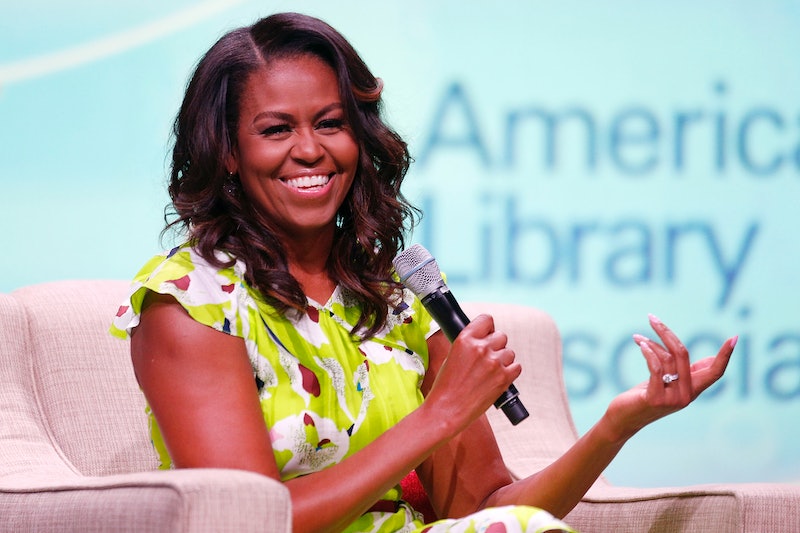 Even the best relationships require hard work and a little help occasionally. Though we know that relationships are full of compromise, communication, and making a concerted effort, people are still sometimes reticent to admit that their relationship might need a little help now and again. It's easy to think that a relationship should be effortless, fueled on a constant flow of spark and charisma, even though that's pretty unrealistic. That's why it's so refreshing that Michelle Obama opened up about the fact that the Obamas went to marriage counseling in the past.

Obama discussed counseling in an interview with Robin Roberts on Good Morning America about her memoir Becoming, explaining that even a couple with a healthy marriage need a little help sometimes. Obama shared that they sought therapy to help them talk out their differences — and talked about the need to work on relationships, rather than assuming that they'll always be great naturally. She also spoke about realizing that she was responsible for her own happiness and, of course, asking for help when you need it.

"What I learned about myself was that my happiness was up to me and I started working out more, I started asking for help, not just from him but from other people,” Obama said. “I stopped feeling guilty.”

Choosing to share about something as personal as going to marriage counseling is so important. "I think it’s great that Michelle Obama is opening up about couples counseling," relationship therapist Aimee Hartstein, LCSW, tells Bustle. "There can definitely be a stigma with couples counseling that should be acknowledged and addressed." The more people — especially people as inspiring as Obama — who share their stories, the more we can address the stigma, because there shouldn't be any shame in choosing to work on your relationship.

The Benefits Of Couples Counseling

One of the reasons there's so much silence and stigma around couples counseling is that we often think of it as a last resort — a flailing attempt to save a dying relationship. But that's not the case at all. In fact, pretty much everyone could do with a little couples counseling now and then. "The truth is, every couple could probably use some couples counseling, so the ones who are actually going are more on top of things," Hartstein says. "I’ve often had people make disparaging comments about couples that were doing counseling even before they were married. There was a suggestion that if they need counseling now, they must really have a lot of problems. I don’t see it like that at all. I believe that couples counseling helps shore up a strong foundation between a couple."

It can be difficult to share personal struggles, especially when it means admitting that your relationship isn't always perfect. But if more people like Obama would open up about their experiences, we might start to associate counseling with happy and healthy couples and not just couples who are on the rocks. There's never any shame in asking for help — and hearing Obama talk about that is just so important.