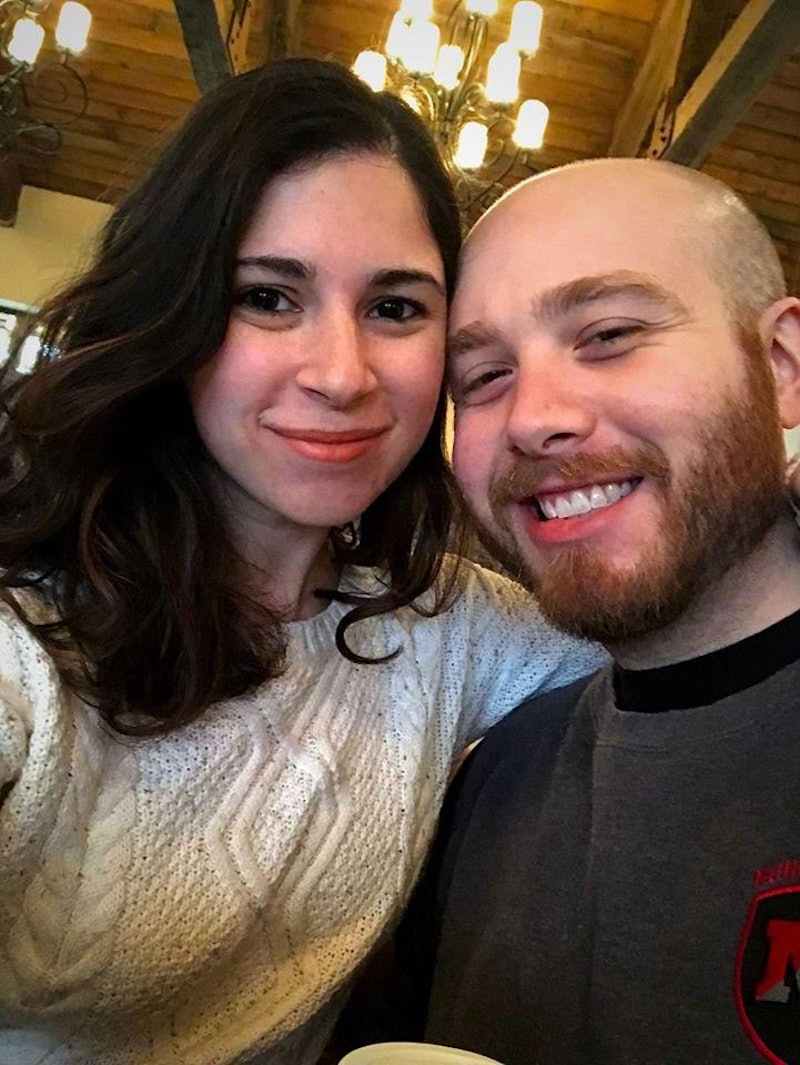 Right away, Kurt and I agreed on almost everything. We had met through a mutual friend in 2015, but we didn't start dating until we came across each other on Bumble a few years later. That's when we discovered that we were on the same page when it came to most of life's most important decisions — what movies to watch, what to order on Seamless, the breed of dog we want to adopt someday. But there was one way we were very different: I knew I wanted kids one day, and he knew he didn't.

While neither of us are at points in our lives where procreation is an urgent matter (I'm 24, and he's 28), knowing that this major difference could eventually end our relationship freaked us out. When we first discussed the issue and looked at our options — breaking up right then, ignoring the issue until it became too big to dismiss, or trying to work through it with the help of a therapist — there was really only one good choice. Six months into our relationship, we decided to give couples therapy a shot.

Neither of us knew any couples who had been in therapy before. We had each done individual sessions, and we agreed on the myriad benefits of talking stuff out. Still, taking this step caused us both a bit of concern. By going to couples counseling, would we be making a big deal out of nothing? Were we still too young and too new to do something so "intense"? Would therapists even take us seriously? What if it didn't work?

If there's a stigma around individual therapy, couples therapy is 10 times more taboo. In pop culture, couples therapy is nearly always depicted as a way of saving patients' marriages — just look at the movies Couples Retreat and Hope Springs, as well as shows like Divorce and Big Little Lies. Young, unmarried, childless couples are absent from the on-screen conversation because their conflicts are not as high-stakes as those of people who are married, have kids, and have built entire lives together.

This sentiment is sometimes echoed by my friends when I tell them that Kurt and I are in couple's therapy. While they're supportive of us trying to chart the future of our relationship, many of them express confusion or skepticism over us going to a therapist. "Don't you think that's... extreme?" I recall one friend saying, failing to hide her shock. And even if the others haven't said their reasons outright, it's easy to read between the lines: Couples therapy, they're thinking, is what unhappy married couples do when someone cheats or threatens divorce — when things are truly broken. It is not what you do when you are in love, in your 20s, and barely a year into your relationship. If being together is this much work now, their looks say, what are you going to do when sh*t really hits the fan?

Getting over our initial hesitation, and our friend's opinions, was hard, but it was even harder to finally commit to therapy and not be able to find a therapist who would work with us. Although tracking down the right counselor is never easy, finding someone who was willing to meet with a 20-something, relatively new couple was extra challenging. More than once, a therapist turned us down because of our ages and marital status, and the ones who did agree to consider us couldn't hide the skepticism in their voices. Even our current therapist was at first surprised when we explained our situation, but not because we're young or because of the subject we were there to discuss. She deals with the kids issue often. It's just rare, she told me, for couples this early on in their relationships.

"I think there can be [a stigma], but I think that there is less of one than there used to be," says Nicole Richardson, a licensed professional counselor and licensed marriage and family therapist. In fact, according to recent surveys, more millennial couples have attended some form of couple's or relationship counseling than any previous generation.

"I have several couples in their 20s and 30s who are in couples counseling right now," says Dr. Gary Brown, a licensed marriage counselor in Los Angeles who has worked with singles and couples for over 25 years. The problems his younger clients face vary, but typical subjects range from alcohol abuse to jealousy to hesitation about getting married. Yet while these issues might be just as serious as those faced by older couples, Brown says that he actually thinks younger partners, who tend to be "more psychologically informed and sophisticated" than other generations, often get greater benefits from therapy.

"If you want to build a strong house, doesn't it make sense that you want to build a strong foundation to start with?" Brown asks. A strong foundation, according to Brown, means "learning each other's love languages and developing communication skills," and perhaps most useful for me and Kurt, "understanding the differences in our personalities and why there is wisdom in the notion that opposites attract."

Anita A. Chlipala, a licensed marriage and family therapist based in Chicago, echoes this sentiment, explaining that couples who seek counseling earlier in a relationship are setting themselves up for better results in the long run. "On average, couples wait about six years before they seek counseling," she says. "That's a lot of time to do a lot of damage. The more couples can be proactive, the more they can minimize unnecessary damage and protect and nurture relationships to keep the romance, passion and friendship alive."

"If you have never run a marathon, you get a coach or join a running club, right?"

During our first therapy session, Kurt and I were unsure of what to expect. Both of us tend to ramble — a lot — when we're nervous, and so we spent the first few minutes of our session blathering on about our relationship history, our past therapy experience, and our childhood traumas while I fidgeted with my jewelry and Kurt cracked jokes to make things easier. And when it finally got time to explain the kids situation, I found myself sounding defensive, as if our therapist was going to question the severity of the issue and tell us to stop worrying so much.

But of course, that's not what happened. Instead, she spent that session, and every one thereafter, confirming our beliefs that we were doing the right thing by being there. Any doubt either of us had about taking the step melted away after that first appointment; if having a future for our relationship was that important to us, our therapist emphasized over and over again, why wouldn't we do everything we could to make that happen?

According to Richardson, what Kurt and I are doing — getting help at the beginning, rather than what could be the end — is a smart move. "If you have never run a marathon, you get a coach or join a running club, right?" she asks. "In most other areas of our lives, we are allowed to ask for help to seek a mentor when we haven’t done something before — why would relationships be any different?"

In our appointments, Kurt and I tell each other just how nervous, scared and frustrated we feel about our future, in a moderated space where we're encouraged to listen to each other without interrupting. We don't get to turn away, change the subject, look at our phones, or do any of the other avoidance techniques that seem so easy when talking about it alone. And with our therapist guiding our conversation and making sure we aren't refusing to let things go (me) or deflecting away from the issue (Kurt), we resolve problems more quickly and openly than we do when we're on our own. Both in sessions and out, we've become more open with each other about our hopes and fears; when we have a problem or miscommunication, we talk it out immediately rather than let it build up.

Couples therapy might not be right for everyone. Perhaps you're just not the type of people who like talking to strangers about your problems, or maybe issues like money or scheduling are unavoidable barriers. But for us, at least, it's proved invaluable.

On the surface, nothing about our relationship has changed since we started therapy five months ago. We're still happy and in love, snuggling in bed, and planning trips to Europe. But the truth is, everything is different — in a good way. And when it comes to the kids issue, we've learned, slowly but surely, to live with the uncertainty. It's not always easy. Knowing that an otherwise-great relationship has an expiration date tends to put a damper on things like marriage talks and apartment hunting. Because of therapy, though, we're both getting better at it. We may not have all the answers right now, and that's OK. Even if our relationship comes to an end one day, Kurt and I will feel comforted knowing we did everything we could to make it as strong as possible while it lasted.