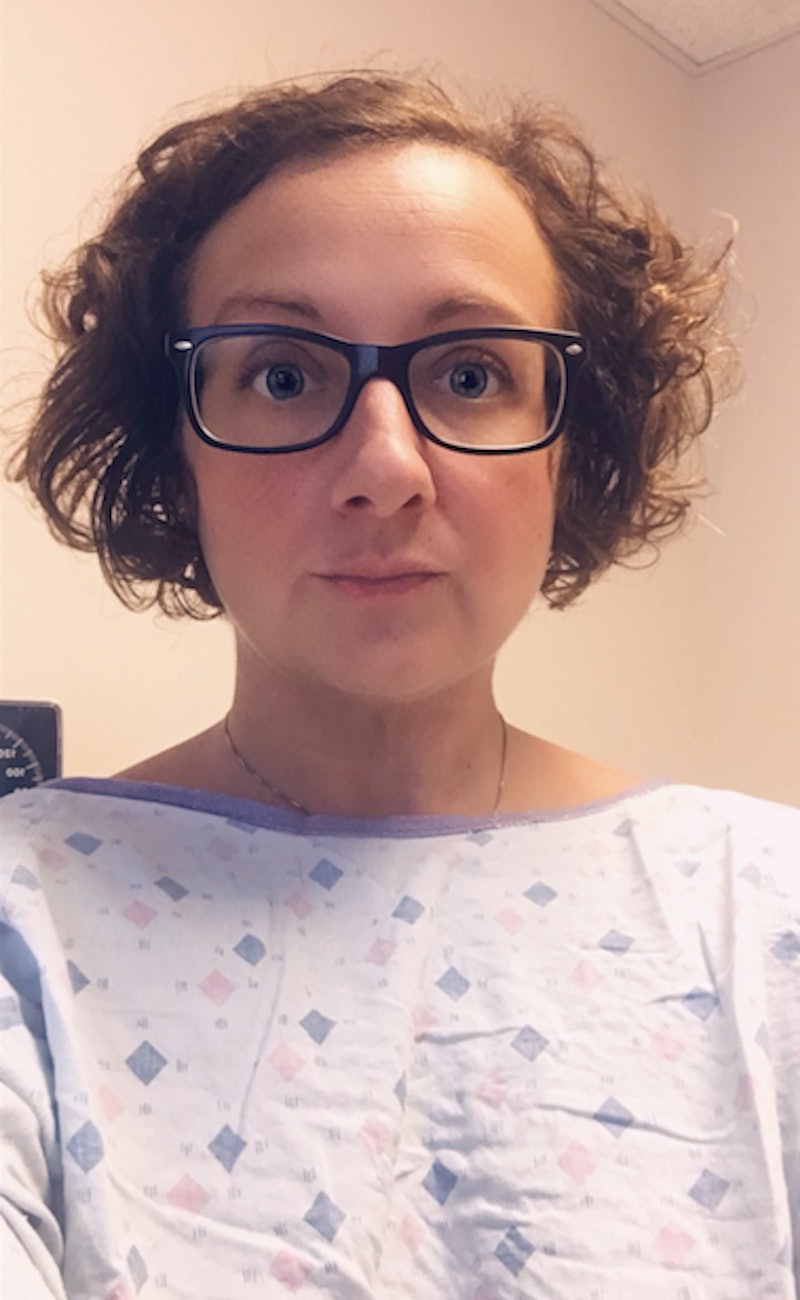 I was alone, in a bathroom in Barcelona, terrified; while the would-be-father, was off somewhere. Maybe at the beach, maybe taking a siesta, or maybe in bed with someone else. We were never in a committed relationship, but since I was on the Pill we made a deal: we’d use condoms with everyone else, but not each other. In other words, it was my responsibility to make sure I took that pill every single day at the same time, while he got to enjoy the benefits of intercourse without a condom. His responsibility? Nothing. That was my first moment of inequality in this situation.

Like a lot of people, I’ve been glued to the Supreme Court nominee Judge Brett Kavanaugh’s confirmation hearings. And, like a lot of people, when Senator Kamala Harris asked, “Can you think of any laws that give government the power to make decisions about the male body?” Kavanaugh’s answer was a stuttered, “I’m not thinking of any right now, Senator.” Why wasn’t Kavanaugh thinking of any? Because there aren’t any.

We sometimes overlook that inequality when it comes to birth control, pregnancy, and the reproductive system as a whole. Instead, when discussions about gender inequality arise, the first thing that comes to mind is the gender wage gap. In certain professions, too, women are overlooked or not even considered because of their gender (women make up only 1/5 of Congress), and who can forget that absolutely absurd thinking that Hillary Clinton, as a woman, would be too emotional to be president? We even have gender inequality in the bedroom with the orgasm gap. Gender inequality is everywhere, whether or not we choose to acknowledge it.

But the responsibility of birth control almost always falls in the woman’s lap. While I have always believed that condoms are absolutely a tool for equality, because it does take two people to have sex, why is it me who has to remember to the take the Pill? Why is it me who will be getting an IUD in a few weeks? From NuvaRing, to the patch, to Depo-Provera, to Nexplanon, why is it all my responsibility? That right there is absolutely a perfect example of gender inequality, and something that one would hope by 2018, would have been remedied. But apparently we’re not to the point where science is ready to control male reproductive systems with hormones. How convenient.

In a recent Bustle Trends Group survey of 226 women, ages 18 to 34, 54 percent reported feeling like birth control was solely their responsibility, while only 35 percent share the responsibility with their partner. According to one participant in the survey, "Birth control is seen as a woman's responsibility — if she gets pregnant, it's always solely her fault,” while another participant echoed a similar sentiment, “Women are still expected to be in charge of birth control, but also bear the stigma of men's belief women might try to 'trap' them into pregnancy, even if they don't want to take responsibility for themselves."

That’s why I waited to tell him I was pregnant. I wasn’t just worrying about his response, but chastised myself for getting pregnant. It was my responsibility and I messed up, I told myself. Granted, the pregnancy was out of my control. I had been sick with food poisoning for days and nothing was staying in my system, but still, I took the burden of blame on myself. I was the one who got food poisoning and I was the one who was on the Pill.

His response, when I finally told him, was one of conflict. At first, he called children a "gift." He even asked if he could call his father in Venezuela to tell him he was going to be a grandfather. I told him we needed to wait on this one. I’m glad we did. Less than 24 hours later, he found himself in the ER suffering a major panic attack over it. Something I knew was inevitable once it sank into his brain. It was after that, that he decided an abortion would be best.

He didn’t seem to realize that only one of us would be getting that abortion he so desperately wanted: me.

Although we tried to talk about it multiple times, we didn’t get very far. He would cry, I would cry, I would make a cheesecake — his favorite dessert — and we'd talk about anything else instead. Then, after he’d leave, I’d lay in my bed, wishing I had said the things I wanted to say and went over all the things I wish he’d said. Like, maybe how he loved me enough to make it work or how he loved me enough to want me to remain child-free to fulfill my dreams. But all that came out of his mouth was that his dreams would be ruined and his life would be destroyed, if we didn’t get the abortion. And round and round it went. He didn’t seem to realize that only one of us would be getting that abortion he so desperately wanted: me.

I left Barcelona soon after, still pregnant and still on the fence with my choice. I went directly to Paris for a couple days to see friends before returning to the States. The day I arrived, I met two friends for dinner. The next morning, I woke up to blood.

I called him. He seemed barely concerned for my health. I was confused and sad, still unsure if it was a miscarriage or if my period decided to show up almost two months late, despite what the pregnancy tests had said. There was an absolute disparity in how I felt and how he felt. I was experiencing loss and his heart was jumping up and down in joy and relief. I couldn’t bear it. I couldn’t bear that my choice had been taken away from me. It wasn’t taken away from him; it was taken away from me.

By the time I got back to the States a few days later, the bleeding had stopped for the most part, the cramps were better, but I went to the doctor to make sure everything was OK. I called to tell him the news. Then he was gone.

The moment I miscarried all his responsibility was absolved.

Once he knew the fetus was gone, that he no longer had to worry about his life being "ruined", he disappeared. He blocked me on social media and WhatsApp. The moment I miscarried all his responsibility was absolved.

I didn't just have to pick up the pieces of a broken heart, I also had to deal with the physical, emotional, and psychological damage of having gone from being a pregnant woman, unable to commit to an abortion or keeping it, to a woman who miscarried. He was free; I was not. It didn’t matter that I cried in bed for weeks. It was all so easy for him. He got to sneak off and wash his hands of all of it.

After he blocked me, I got an email from him about how my pregnancy mentally scarred him and, because of it, his sex life would never the same. He was completely ignorant to what things were like on my end and even threw in my face the fact that I had one glass of wine at dinner the night before I miscarried. I wasn’t just being blamed for getting pregnant, but I was now being blamed for the miscarriage. In his mind, I brought all of this on myself. I think in believing this, he could convince himself he was innocent; he could sleep at night thinking he had done nothing wrong. It was all my responsibility, so who else was there to blame?

I still feel the shame, he feels… well, I don’t know. But I do know whatever he's feeling doesn't include responsibility, guilt, or even compassion. While I initially made excuses for his behavior, defending him while I took the blame, I know I'm not likely to make peace with his actions any time soon, if ever, but I am doing my best to make peace with what happened in regards to the pregnancy.

I don't believe that everything happens for a reason, but I do believe how things play out are sometimes for the best. But even this peace I made, I did so alone while he moved on, anxious to be careless with another woman's heart and body. From beginning to end, there wasn’t an ounce of equality in it. But, tragically, he's never going to see it that way. He's the victim in this story; I'm the irresponsible woman who almost destroyed his life because it was my job to take the fucking Pill.