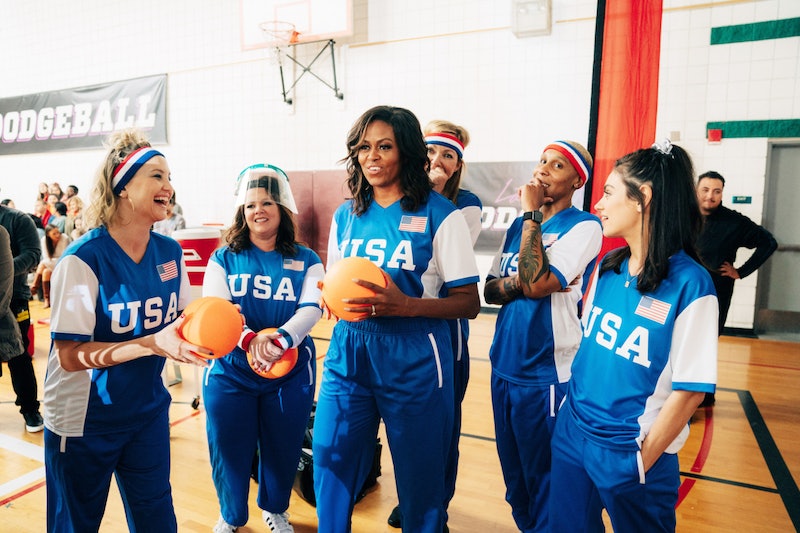 It's not every day that you get to see a former First Lady hit a former One Direction member in the crotch with a dodgeball, but Monday was an exception. On a June 17 segment of The Late Late Show, Michelle Obama's dodgeball game against James Corden proved why she's USA's MVP.

Obama and Corden acted as captains of Team USA and Team UK respectively, each hoping to bring glory to their homeland (and some good-natured embarrassment to their opponents). The all-women Team USA, wearing blue, included Melissa McCarthy, Allison Janney, Mila Kunis, Lena Waithe, and one eager-to-impress Kate Hudson. Team UK, on the other hand, was all-men: Harry Styles, Reggie Watts, Benedict Cumberbatch, and John Bradley suited up in red to defend England. Corden had announced the game on Twitter days earlier, and anticipation was high. But while the star power was evident on both sides, it was pretty clear from the get-go that this was Obama's game.

The ball was already in her court (wrong sport, sorry) when the sketch began with Corden and Obama sitting in his car, Carpool Karaoke-style. Obama had done a Carpool Karaoke segment in 2016, and the pair's argument about who sang better devolved into a competition of whose country is better: the USA or the UK. Obviously, you shouldn't mess with Obama's love for America — her husband ran the country for eight years — but Corden didn't seem to get that memo.

When Obama put the idea of dodgeball on the table, the next step was assembling the team. For her, it was easy: "Listen," Kunis said. "When Michelle Obama calls and asks you to do anything, you just say yes."

"This team is going to eat them for breakfast," Obama claimed, adding, "The most important meal of the day!" Because as competitive as she can get, Obama is still the nutrition advocate we know and love.

Her pre-game speech for Team USA was similarly amusing. "When they go low, we... also go low because that's how dodgeball works," she told them, referencing her speech at the 2016 Democratic National Convention.

Perhaps the true highlight for most viewers was watching Michelle Obama hit Styles "right in the 1D," as the commentator put it. Though fans would likely usually be outraged when someone dares to come after the beloved singer, the rules are clearly different when that someone is Obama: the Twitter reactions from fans (and Liam Payne!) were delighted.

This was also Styles' second crotch-hit in a Late Late dodgeball game, so maybe he should sit the next one out.

Cumberbatch also learned not to mess with Obama: the look on his face after getting her out with a pretty hard hit was priceless. The commentator joked that the Sherlock actor might get a visit from the Secret Service, but his visible guilt might be punishment enough.

Obama clearly didn't need a winning score to come out victorious, however. Toward the end of the game, most of the UK team forgot their allegiance in order to get a signed copy of Becoming, Obama's bestselling memoir.

Team USA did end up taking the trophy home, but even if they hadn't, Obama would remain the winner in everyone's hearts. She proved she was America's true MVP — sorry, UK, try again next time.