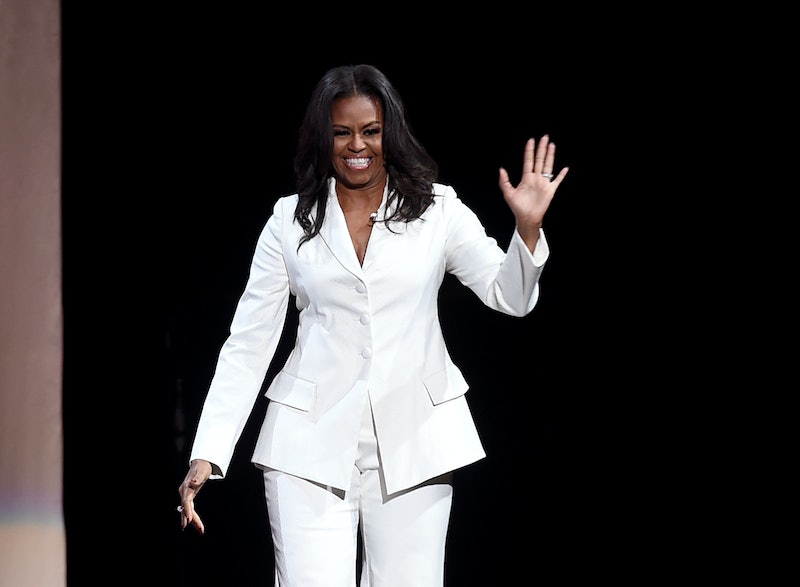 It has only been available since Tuesday, but it's already setting the bar for future political titles. Michelle Obama's memoir, Becoming, sold more than 725,000 copies on its first day, so it's pretty clear which First Lady knows how to "be best."

The 725,000 copies that Michelle Obama's memoir moved its first day on store shelves include all available English- and Spanish-language editions — hardcover, large-print paperback, book-on-CD, eBook, and eAudiobook — sold in the U.S. and Canada. Those copies also amount to more one-day sales than any other Penguin Random House title from this year, which is really exciting. The Hill reports that Becoming's "sales number puts the former first lady’s book on par with Fear by veteran journalist Bob Woodward. The reporter's book about the Trump White House sold 750,000 copies in one day when it hit shelves in September."

The first print run in hardcover was an impressive 1.8 million, but Penguin Random House "has already gone back to press for an additional 800,000 hardcover copies, which will bring the total number of copies in print in the U.S. and Canada to 2.6 million," according to a Friday press release from the Big Five publisher. For more information on just how outstanding that 725,000 figure is, check out this article on book sales from Electric Literature.

"Becoming" by Michelle Obama
Amazon
The book that falls under "required reading."

Becoming's stellar sales are only the latest in newsworthy moments surrounding Michelle Obama's memoir. Tickets to the 10-city book tour have made headlines for being both hard-to-find and, occasionally, free, with re-sold tickets fetching as much as $13,000, and 10 percent of all seats going to local community groups. On Monday, Oprah Winfrey announced Becoming as the next pick for her famous book club — a move that undoubtedly helped boost the memoir's sales.

Other news about Becoming has focused on the book's big reveals. In her memoir, the former First Lady revealed that she had a miscarriage before she and Barack Obama conceived daughters Sasha and Malia through IVF, and later discussed the trauma of baby loss with Good Morning America host Robin Roberts, in an attempt to normalize miscarriage as something many young women experience.

Michelle Obama's memoir also shares the story of Barack's proposal. Reviewing Becoming on Twitter, Barack Obama admitted to being "a little biased" as a reader, but said that the book "faithfully reflects the woman I have loved for so long."

More like this
10 Must-Read New Books Out This Week
By K.W. Colyard
Dr. Anna Pou Is Still Practicing Medicine After Facing Murder Charges
By Brad Witter
This New TV Show Revisits The Most Controversial True Story From Hurricane Katrina
By Brad Witter
'Children of the Underground' Subject Faye Yager Now Runs A North Carolina B&B
By Brad Witter
Get Even More From Bustle — Sign Up For The Newsletter