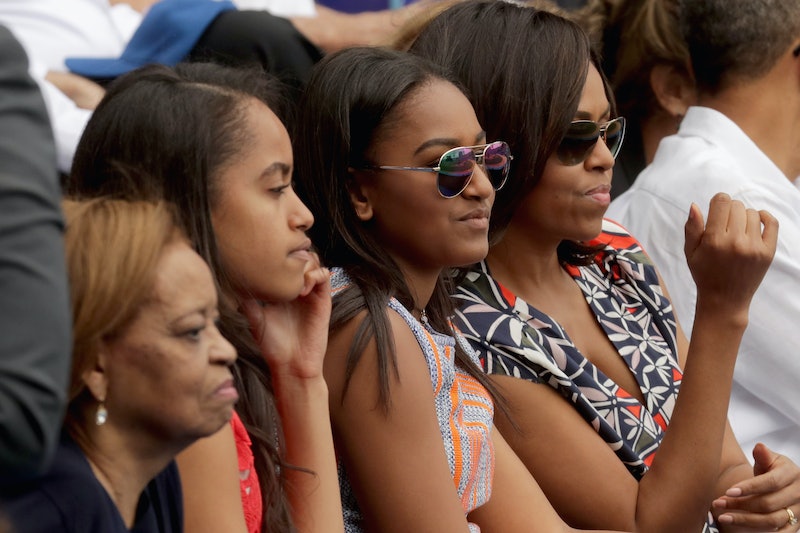 On Tuesday, the day her memoir Becoming was released, the former first lady gave a shout-out to the Bush twins and Chelsea Clinton. Michelle Obama talked about Malia and Sasha during an interview with Good Morning America, and how Jenna, Barbara Bush, and Clinton supported her daughters while they were in the White House.

"They had support from a lot of the other first kids — Jenna and Barbara and Chelsea," Obama told Good Morning America anchor Robin Roberts. "I love those girls. I will love them forever for what kind of support they provided to my daughters."

Obama told Roberts that the former first daughters would publicly step forward to support Malia and Sasha. "They always had their backs," she said. "[If] somebody went after them in the press, Jenna would get in there and say something. Chelsea would send a tweet out."

One of those examples of Clinton speaking up for Malia included a tweet on Nov. 24, 2017, after a viral video showed Malia apparently smoking. (It was later taken down.) Clinton tweeted, "Malia Obama's private life, as a young woman, a college student, a private citizen, should not be your clickbait. Be better."

White House adviser and current First Daughter Ivanka Trump also defended Malia on Twitter during that incident. "Malia Obama should be allowed the same privacy as her school aged peers," Trump wrote. "She is a young adult and private citizen, and should be off limits."

Obama told Roberts that she was "so proud" of her daughters. "They have managed this situation with poise and grace and they are normal and kind and smart and friendly and open," she said. Obama also said Malia and Sasha were "great and thriving."

In 2009, the Bush twins wrote to Malia and Sasha after they moved to the White House. The Bushes detailed what their experiences as first children were like, and what they could do to make their stay fun and memorable. For instance, the sisters wrote that Sasha and Malia should take advantage of the banister in the White House solarium for some adventure.

At the time, the Bush twins wrote to the Obama daughters, "When you slid down the banister of the solarium, just as we had done as eight-year-olds and again as 20-year-olds chasing our youth, your joy and laughter were contagious." They wrote to Sasha and Malia again in 2017, this time about life after the White House.

The former first lady also joked about her younger daughter, Sasha, running against President Trump in 2020. Obama said, "I think, at this point, everybody’s qualified and everybody should run" and "I might even tap Sasha. Sasha, you got some free time? I think you’d do a great job."

As for herself, Obama said, "Where I am is that right now we should see anybody who feels the passion to get in this race ― we need them in there. And I think that the process will play itself out."