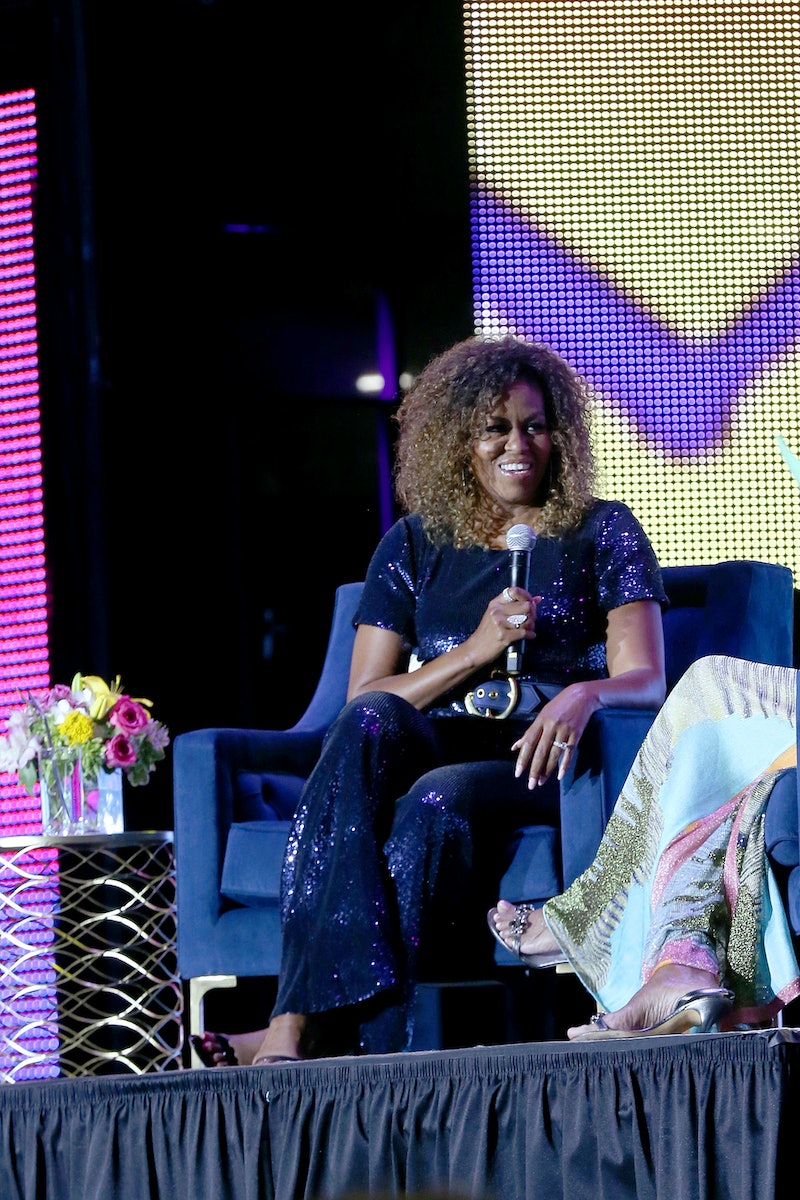 Some of your favorite celebrities and influencers headed to New Orleans for Essence Festival over Fourth of July weekend. From gurus like Jackie Aina to actors like Zendaya, it was star studded. However, Michelle Obama's head-to-toe sequins may have stolen the entire event. The former first lady's all sequin, navy jumpsuit paired with her natural curls was flawless, and you have to see the look.

During the festival, which celebrates "African American music, beauty, health, entrepreneurship and more," Obama was the headliner for the event's 25th anniversary. The former first lady sat down for an interview with Gayle King, and she got pretty personal. Obama and King discussed everything from her marriage to moving her daughters Sasha and Malia out of the White House to the current race for president. The interview was candid and offered amazing insight into the Obama's life before, during, and after her time as First Lady.

While her answers and the interview were clearly the star of her Essence Festival appearance, it's hard to deny that Obama looked incredible on stage with King. According to Essence, the author of Becoming was wearing a head-to-toe sequin jumpsuit from designer Sergio Hudson. Unfortunately, the piece isn't available online, but Essence rounded up several alternatives for the gorgeous look.

Obama sparkles no matter what she does, but that jumpsuit didn't hurt anything.

The former first lady was also wearing her natural curls which looked perfect with some soft caramel tones that framed her face.

Of course, Obama wearing some seriously stunning fashion during her post-White House tenure isn't surprising. While the author, mother, and activist was celebrated for her style during her time as first lady, her looks for her book tour and other appearances have been less conservative and a ton of fun.

One of her most memorable recent looks happened at the end of the first leg of her Becoming book tour. Obama sat down with actor Sarah Jessica Parker to discuss her book (which was the best selling hardcover of 2018), but before she actually sat down, the walked on stage wearing $4000 gold metallic Balenciaga boots that had the internet quaking.

Those boots are too good for this world.

The gold Balenciaga boots weren't the only memorable outfit during some of her Becoming tour stops, though. While traveling in Europe to promote the memoir, Obama stepped out in even more sparkle (are you seeing a pattern, here?).

For her tour stop in Copenhagen, Obama chose to wear local designer label Stine Goya, and like her boots, the look was a smash.

Obama's millennial pink pant suit would have been amazing on its own, but with the addition of sequin and crystal sunbursts, it was a look for the books.

While Michelle Obama's head-to-toe sequin jumpsuit at the 2019 Essence Festival may have been a show stopper, it certainly wasn't unusual for the former first lady. She's been looking flawless in sequins and metallics for some time now. Fingers crossed she keeps these sparkly looks coming for fans.