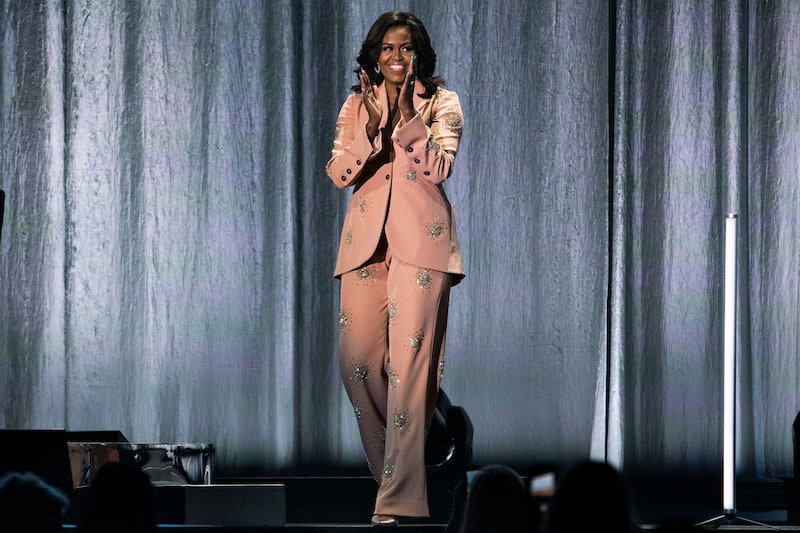 While there are oodles of royal fashion fans out there who follow both Kate Middleton and Meghan Markle's every move, don't forget that American royalty basically exists as well. While kicking off her European book tour, Michelle Obama's sparkly, millennial pink suit basically stole the show, and the ensemble may just rival one of her most famous, post-First Lady duty looks.

On April 9, Obama began the European portion of her book tour for her mega-hit memoir Becoming in Copenhagen. According to Harper's Bazaar, Obama wore a local designer for the occasion. To say the piece was a good choice would be an understatement. Obama wore a millennial pink suit with sunburst crystal sparkles dispersed throughout the pants and blazer.

The suit, by label Stine Goya (offers sizes XS-XL), is actually shoppable, but in what will not be a surprise to fans of the former First Lady, almost all sizes are already sold out. Then, there's the price tag. The suit is actually sold as separates, and while the pink isn't available, you can pick up the styles in baby blue. Unfortunately, at $1,350 for the blazer and $960 for the pants, you're looking at a cool $2,310 in order to cop Michelle Obama's style.

While purchasing her exact suit may not exactly be in your budget, that doesn't mean you can't admire Obama's style on her book tour.

Fans of Obama won't be surprised by her sparkling style choice, though. The Becoming author wore another sparkling number while on her American tour for the memoir that practically sent the internet into a frenzy.

While touring for Becoming on the first leg of her American tour, Obama finished out the travel schedule in New York City with none other than Sarah Jessica Parker (aka Sex and the City's Carrie Bradshaw). Given that Obama would be hosting an event with a woman known for her own love or shoes as well as her iconic characters love of shoes, the former First Lady clear came to show out, and she did.

Obama wore a gorgeous, thigh high pair of gold metallic Balenciaga boots that made her legs look like disco balls in the best possible way. From articles lavishing praise on Obama to fans on Twitter virtually fanning themselves over the fashion heat that was those boots, they could just one of Obama's most iconic fashion moments since leaving the White House.

Thankfully, Obama still has quite a few stops until she ends her book tour. She'll round up a tour of Europe with stops in cities like Paris and London then head back to North America to do a few dates in Canada before finally finishing things up back in the United States in Fort Lauderdale, Atlanta, and Nashville.

For fashion fans of Obama's, this means even more opportunities to see just what the author and philanthropist will wear next. Given that she's already given the world golden Balenciaga boots and a millennial pink suit covered in crystals, there's likely even more stunning looks to come.