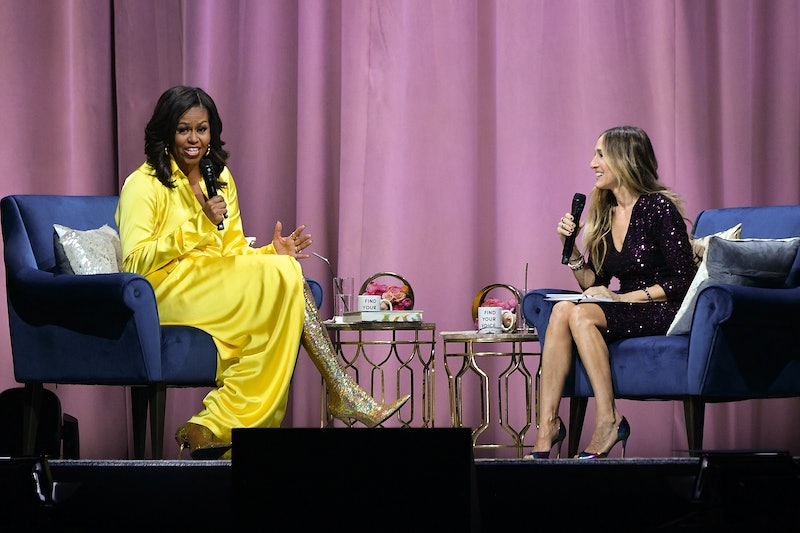 You need to be sitting down. Seriously, go ahead and take a seat because Michelle Obama's Balenciaga thigh-high boots are about to make you a little light headed.

If you never thought you'd hear the name Michelle Obama and thigh-high, gold glitter boots together, who could blame you? However, the boots and Obama are the holiday present you never knew you needed. The world has clearly underestimated the former First Lady's fashion because these $4000, gold metallic boots are the mood the world needs going into 2019.

At the final stop for the first part of her Becoming tour, Obama sat down with Sarah Jessica Parker (yes, the shoe-loving Carrie Bradshaw actor herself) to discuss the memoir that's become the best-selling hardcover of the year. When Obama sat down, she sat down wearing sparkling, metallic gold Balenciaga boots. Basically, the event needed two round of applause: one for Obama and one for her boot choice. Honestly, if angels wore boots, they would be these, and since Obama is basically an angel, maybe they actually do.

Obama didn't just wear the boots with a basic black something or other, either. Oh no! Her golden boots were paired with a vibrant yellow wrap dress with a gorgeous slit that perfectly showed off those thigh-highs. Are you an Obama stan yet? Yes? Great.

Essentially, it was a look only suitable for the forever First Lady of your heart. If someone deserves to be decked out in gold, it's Michelle Obama.

Are you still alive? Okay, good.

As you would expect, the internet basically let out an audible gasp at the site of Obama's boots. The footwear is so good that Vogue tweeted about them. Vogue, people.

Elle writer R. Eric Thomas may have said it best when he wrote, "She looks like the dean at Beyoncé's Coachella university," in his hilarious must-read piece for the magazine.

Just how much praise can the internet heap on Obama and her boots? The limit does not exist.

Those Balenciagas are actually making people believe there is a God — and she would definitely approve of those boots.

Seriously, let Michelle Obama's boots propel you through the remaining days of 2018. Then, embrace that glittering, golden glory in your life during all of 2019.

While this may have been Obama's last tour stop for 2018, don't worry. You'll get a chance to see her again. Obama's Becoming tour has been extended, and new dates and opportunities to see the former First Lady are available.

While hearing Obama speak is obviously the most important part of her book tour, there's also the chance that she'll either wear these boots again or wear something equally as iconic. Thankfully, the world will get to find out when her tour resumes in 2019. Fingers crossed for more glitter, everyone.