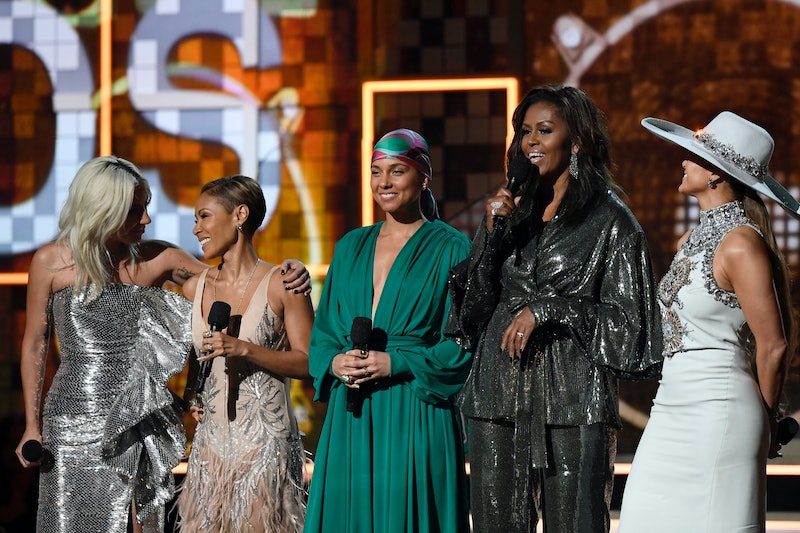 The 2019 Grammy Awards opened with a surprise guest who helped kick off the music industry's annual star-studded awards show. The former first lady of the United States came to the event because she wanted to support her friends — and she warmly shared her affection for them on social media. Indeed, Michelle Obama's 2019 Grammys tweet revealed Alicia Keys helped inspire her appearance on Sunday evening.

Obama and Keys have a history of supporting each other at pivotal moments in their careers. For example, the Washington Post noted that, in 2015, Obama presented Keys with the Grammys on the Hill Recording Artists' Coalition Award, introducing her as "my friend, my girl … Alicia Keys!" Moreover, last December, Keys supported Obama by making an appearance during a national book tour event for Obama's Becoming at the Barclays Center in New York. Vox reported that Keys helped Obama open her event by telling audiences about her own personal evolution and who she's becoming.

At the Grammys, Obama appeared onstage shortly after the show began. She was accompanied by host Keys, as well as Lady Gaga, Jennifer Lopez, and Jada Pinkett Smith, the New York Times reported. As the paper noted, the women all spoke about how music allowed them to express themselves and discover their identities.

On social media, Obama reflected on her appearance and stressed the importance of women supporting other women. She also offered heavy praise for Keys, writing:

A big part of friendship is showing up for your girls — that’s why I was thrilled to be there for the one and only @aliciakeys at the #GRAMMYs. She is one of the most genuine and thoughtful people I know—there’s no one better to help us all celebrate the unifying power of music!

As she spoke onstage at the awards show, Obama also emphasized the importance of solidarity and the empowering nature of music. As the former first lady described (via CNN):

From the Motown records I wore out on the South Side, to the 'who run the world' songs that fueled me through this last decade, music has always helped me tell my story ... Whether we like country, or rap or rock, music helps us share ourselves — our dignity and sorrows, our hopes and joys. It allows us to hear one another, to invite each other in ...

CNN noted that Obama also spoke directly to those onstage with her, adding, " ... Music shows us that all of it matters, every story within every voice, every note within every song — is that right ladies?" Following Obama's words, the other women shared similar sentiments about how music has impacted their lives.

For example, as the New York Times reported, Lopez focused on the liberating nature of music. "Back in the Bronx, music gave me a reason to dance, from hip-hop to freestyle, pop, soul and salsa,” she said. “ ... It reminds me where I come from, but it also reminds me of all the places I can go. Music remains the one place we can all feel truly free.”

Pinkett-Smith noted that music allows people to reflect on and share their own experiences. “We express our pain, power, progress through music ..., " she said via the New York Times. " ... Every voice we hear deserves to be honored and respected."

Overall, Obama's Grammys appearance served to honor women's achievements and solidarity. The former first lady's words at the show and on social media illustrate just how important it is to her to empower her female friends as they make waves in the music industry and beyond.