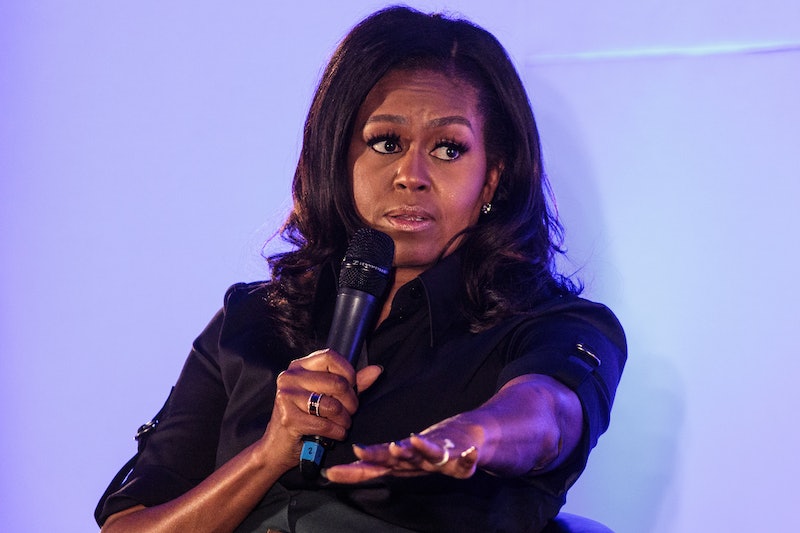 In a new interview with Jimmy Fallon, Michelle Obama spoke about attending Donald Trump's inauguration, and what it felt like when she and Barack left the White House for the final time in 2017. Although she acknowledged that "a lot was going on" in her mind when Trump was sworn in, the former first lady nevertheless summed up her feelings that day in two succinct words.

"Bye, Felicia," Michelle said when Fallon showed her a picture of her and Barack getting on the plane to leave the White House after Trump's inauguration.

In her interview with Fallon, which aired on Tuesday night, Michelle opened up about her relationship with Barack, touched on the music she's been listening to while promoting her new memoir Becoming, and urged young Americans to stay optimistic even in turbulent political times.

"Jimmy, everywhere I go, I get to see young people," Michelle said. "And we owe young people that optimism, that hope, because what's the alternative? They come into this world...with so much promise, and so much openness. We're the ones that shut them down. And for the next generation that's coming up, the next leaders, they need to know that their story can be my story."

Michelle recently revealed that she and Barack have sought marriage counseling to sustain their relationship in trying times, and she spoke about what she took from this experience during her sit-down with Fallon.

"I was one of those wives who thought, 'I'm taking you to marriage counseling, so you can be fixed, Barack Obama,'" Michelle said. "Because I was like, 'I'm perfect.' I was like, 'Dr. X, please fix him.' And then our counselor looked over at me, and I was like, 'what are you looking at? I'm perfect.'"

Michelle, who has suggested in the past that married couples maintain separate bathrooms, said she ultimately realized that "it wasn't up to my husband to make me happy — that I had to learn how to fill myself up, and put myself higher on my priority list." She encouraged young couples to understand that no relationship is perfect, and learn to take the bad with the good.

"There are a lot of young people who look at me and Barack, and you and your wife, and people they see and they think, 'Oh, I want those. Hashtag relationship goals,'" Michelle said. "But I want young people to know that marriage is work. Even the best marriages require work...I don't want young people to quit the moment they have a hardship." She added that "if you're married for 50 years, and 10 of them are horrible, you're doing really good."

Finally, Michelle gave a shout-out to Tonight Show bandleader Questlove, who compiled the playlist that she uses at events when promoting her book.

"How did you hook up with Questlove?," Fallon asked.

"And what'd you give her?," Fallon asked.

Michelle evidently didn't mind, however: She called Questlove's mix, which is available publicly on Spotify, "the baddest playlist on Earth,"