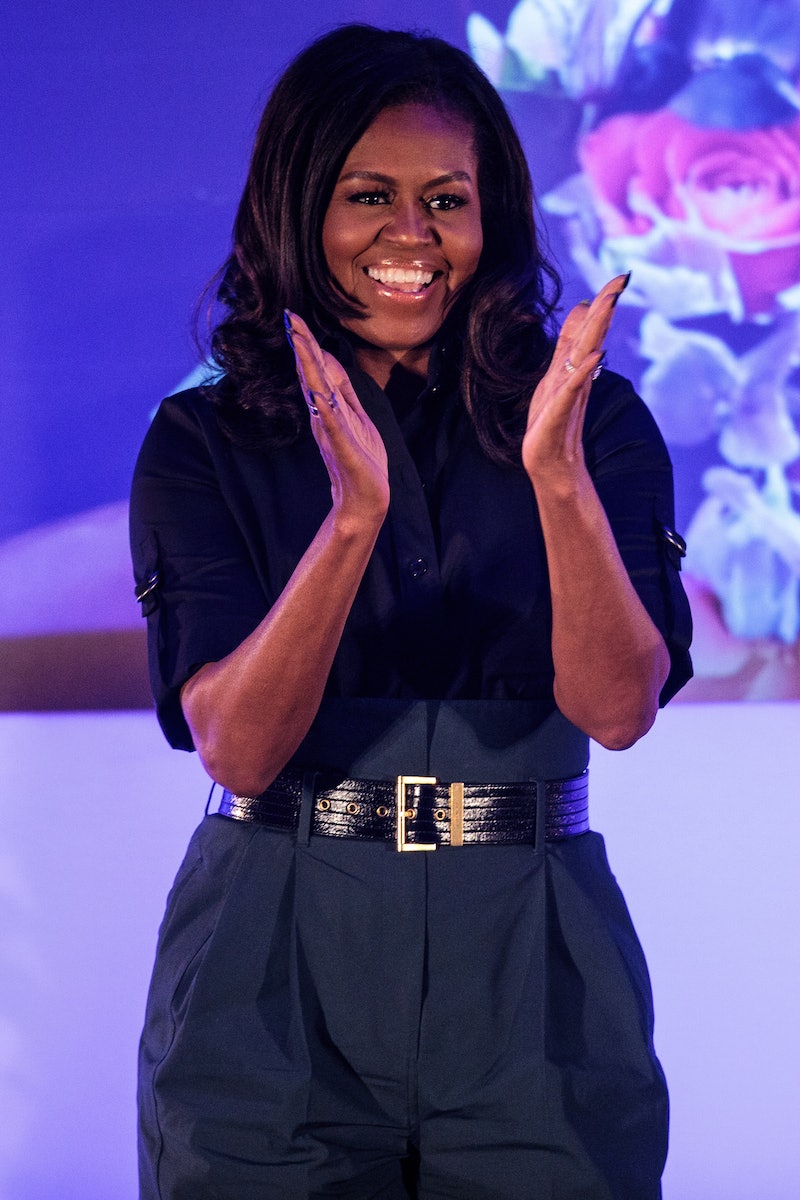 Another day, another record set. Michelle Obama's memoir just became the best-selling Christmas book in the UK, unseating longtime bestseller David Walliams (The Midnight Gang). The former First Lady and perpetual badass' new book, Becoming, sold 92,000 copies in the UK last week, outpacing Walliams' The Ice Monster by more than 10,000 units. Michelle Obama is the first woman to sell the UK's No. 1 Christmas book since J.K. Rowling in 2008, and she is the first ever author of color to win the top spot on across-the-pond sales charts.

Earning the Christmas No. 1 title in the UK isn't the first sales record Michelle O. has broken with Becoming. With its Nov. 13 release, the memoir smashed 2018 sales records set by Michael Wolff, whose tell-all, Fire & Fury: Inside the Trump White House, dominated during the first 11 months of the year. Becoming flew off store shelves, selling 725,000 copies on its first day in the U.S. and Canada. Two weeks later, Michelle Obama's memoir had become the No. 1 book of the year, and on Dec. 11, Crown Publishing announced that Becoming had sold more than 3,000,000 copies in its first month in stores. Talk about a bestseller.

The best-selling book of the year in the U.S. just became the No. 1 Christmas book in the UK.

Although Michelle Obama's book hasn't sold nearly as many copies on the other side of the Atlantic, Becoming has moved a staggering "485,000 [copies] across all formats," according to The Guardian. The newspaper also notes that "book sales are up by £22m year on year" in the UK, and may be on track to beat 2016's sales, which were bolstered by the release of Harry Potter and the Cursed Child.

It's critical to note that Becoming has not outsold David Walliams' newest book for children, The Ice Monster, overall. That book, released on Nov. 6 and currently Amazon's No. 1 Best Seller in Humorous Fiction for Young Adults, has sold more than 520,000 copies in the UK. The Ice Monster only moved 80,400 units last week, however, and was therefore unable to win the Christmas No. 1 for Walliams' third year running. The author's two previous books, The Midnight Gang and Bad Dad, were Christmas bestsellers in the UK in 2016 and 2017.

Congratulating Michelle O. on her victory Tuesday, Walliams tweeted at her: "You are rightfully sitting at the very top of the tree like the shining light you are."