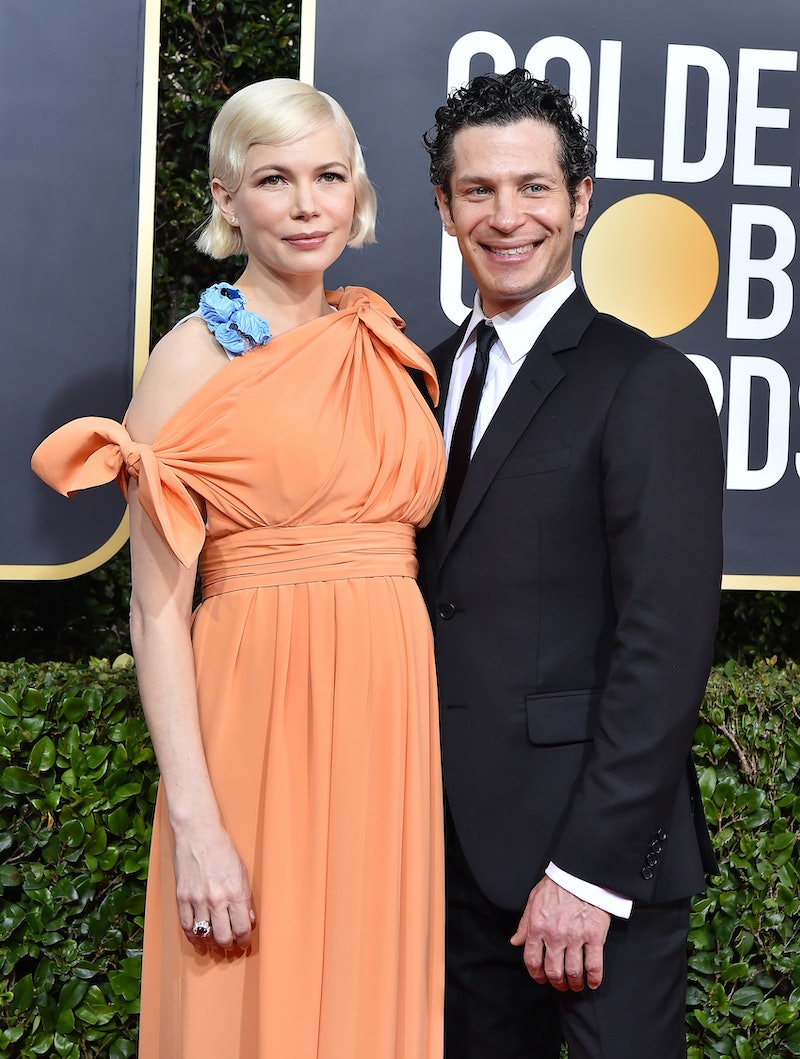 After making their surprise red carpet debut at the Golden Globes, fans can't help but wonder what Michelle Williams and Thomas Kail's relationship timeline looks like. The couple has been keeping their relationship quiet, but things are serious between the two. In late December, People confirmed that they're not only engaged, but they're also expecting a baby in 2020. It's going to be an exciting year for the couple, there's no doubt, which is why fans are so curious about how their romance started in the first place.

While he's not a big name star like Williams, Kail is famous in his own right. As the Tony-award winning director of Hamilton and In the Heights, he has a close working relationship with Lin-Manuel Miranda — which seems to have helped facilitate his meeting with Williams, since Miranda and Kail were executive producers on Fosse/Verdon. The pair haven't confirmed that they met on the set of the miniseries, but since they weren't previously connected, it seems likely that they bonded during the making of the FX show.

After walking the carpet at the Golden Globes, Williams and Kail are expected to also attend the Screen Actors Guild Awards together on Jan. 19. But before they dazzle fans with another awards show appearance, it's time to untangle their complicated relationship timeline.

The exact timing of Fosse/Verdon's filming is a bit confusing, but it seems that the FX miniseries was filmed in fall 2018 — in November and December, to be exact. The show was very much Kail's baby, and he directed Williams in five episodes, per his IMDb page.

Williams and Elverum ended their marriage after less than a year in April. At the time, a source told CNN, "Michelle and Phil separated at the beginning of the year. It was an amicable split and they remain friends." Meanwhile, Kail and his wife, actor Angela Christian, also separated sometime at the end of 2018 or the beginning of 2019.

December 2019: The Couple Are Photographed Together For The First Time

The couple quietly went public with their relationship in December, when they were photographed together in London where Williams was filming Venom 2. The actor was later spotted shopping for baby clothes during her downtime, as reported by People.

In a People exclusive, the couple announced that they're engaged, and expecting their first child together later this year (Williams has a daughter, 14-year-old Matilda from her relationship with the late Heath Ledger). "Michelle fell in love," a source told People. "She is happy and fulfilled and ready for another child."

January 8, 2020: The Duo Make Their Red Carpet Debut At The Golden Globes

After surprising fans with the news that they're not only dating, but also engaged and expecting a baby, Williams and Kail walked their first red carpet together as a couple at the Golden Globes.

Williams and Kail's relationship sounds like the very definition of a whirlwind romance — and the fact that they've managed to keep their love story out of the public eye despite that is impressive. Watch the SAG awards on Jan. 19, at 8:00 p.m. on TNT to see if the happy couple steps out together again this awards season.