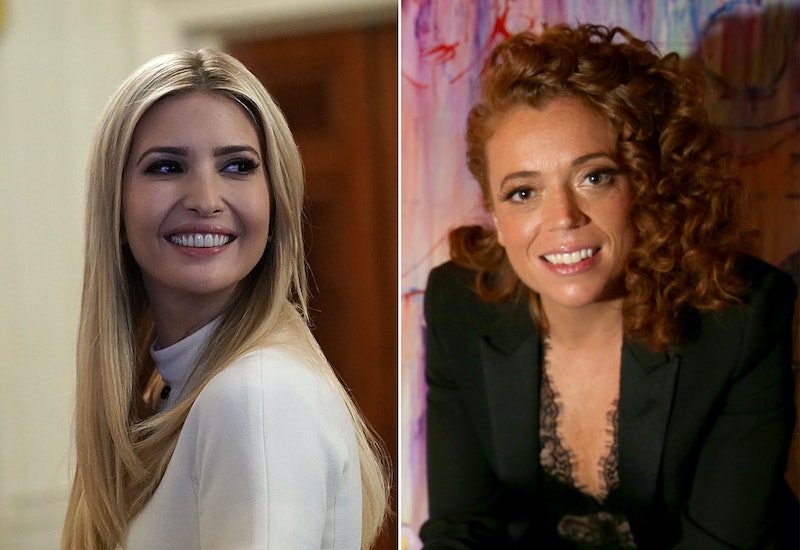 Comedian Michelle Wolf briefly became a major focus of the Trump administration, after she tore into several officials — most notably White House Press Secretary Sarah Huckabee Sanders — at the White House Correspondents' Dinner. She didn't stop there, though. On her Netflix show The Break, Michelle Wolf insulted Trump administration officials — especially Ivanka — in the coldest, and yet also most polite, ways possible.

This segment of her show came as a response to numerous news items from recent days, including Sanders being forced out of a restaurant and Democratic Rep. Maxine Waters encouraging supporters to heckle Trump administration officials. Wolf, however, said that she believed there was a right and a wrong way to go about that heckling.

“You can’t just casually harass these people. You have to insult them specifically. 'You're a c***' doesn't hurt them. It's on their vision board,” Wolf said on The Break. "You have to make sure your words are life-alteringly hurtful. You’ve got to hit their deepest insecurities with the hot venom of a teenager from a broken home.”

Wolf's approach, however, included instructions from an etiquette perspective — and so she packaged it all in a segment called "Mind Your Manners."

She started with Senior White House advisor and First Daughter Ivanka Trump, who she also came back to multiple times throughout the segment for additional insults. In line with her goal of hitting at the officials' deepest insecurities, Wolf began with a suggestion for how to greet Ivanka.

“If you see Ivanka on the street, first call her ‘Tiffany.’ This will devastate her," Wolf said. The next thing to do, Wolf said, was to talk to Ivanka in terms that she'd understand.

"Say, ‘Ivanka, you’re like vaginal mesh. You were supposed to support women, but now you have blood all over you and you’re the center of a thousand lawsuits,’” Wolf said.

She didn't stop with Ivanka, though. Her next target was Senate Majority Leader Mitch McConnell, who's been in the headlines since Supreme Court Justice Anthony Kennedy announced his retirement.

"If you see Mitch McConnell at a restaurant, smile, then take his chair away before he can sit down and say, 'How do you like having a seat stolen from you, ya flop neck?'" Wolf said.

Next up was Scott Pruitt, the EPA head who's run into numerous ethical issues during his short time in office, as the Guardian explained.

Pruitt, Wolf explained, was best dealt with by just starting to cut his hair, with the explainer that you're as qualified for that as he is to be the head of the EPA. Supreme Court Justice Clarence Thomas, then, can always do with a reminder of the sexual harassment scandal that surrounded him in the early 1990s, in Wolf's estimation. Wolf then suggested that if you see Secretary of Education Betsy DeVos, you should approach her as though she's a skittish animal, like a deer — and then release a long string of profanities.

As she went through those figures, though, Wolf just kept coming back to the first recipient of her so-called polite insults.

"Ivanka, you're like that birth control pill Yaz," Wolf said, referring to a birth control pill that became very popular before it came out that it caused life-threatening blood clots, as Ms. Magazine discussed. "At first it seemed like it'd be really cool and helpful, but you need to be immediately recalled."

Her next Ivanka taunt almost began like a pick-up line. "Hey girl, do your legs hurt?" Wolf said. "Because you've been runnin' afoul of government ethics all year."

Ivanka didn't get the final insult, though. That honor went to Counselor to the President Kellyanne Conway.

"If you see Kellyanne Conway, then I am so, so sorry," Wolf said, closing out the segment. "That means you're going to die in seven days."