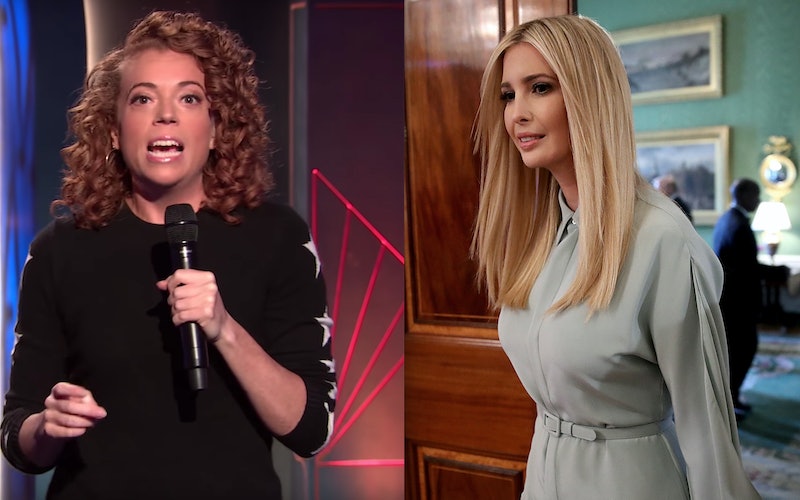 Comedian Michelle Wolf's most memorable wisecracks from her White House Correspondents' Dinner address in April targeted the women of the Trump administration; she didn't spare the first daughter then, and she seems to have no intention to do so now, despite the backlash that followed that speech. In the newest episode of her Netflix show The Break, Michelle Wolf joked about Ivanka Trump with absolute ruthlessness.

"Big news this week: Ivanka Trump is closing her fashion line," Wolf told the audience, referring to the first daughter's decision to end her six-year-old namesake clothing brand. Trump announced the decision on July 24 and said in a statement to Bustle that it was meant to let her focus fully on her work in the White House. She'd stepped down from her managerial role in January 2017 before joining the government, but she still maintained partial ownership over the line by way of a trust.

"You better buy Ivanka's clothes while you still can," Wolf said, "Nazi memorabilia tends to skyrocket in value."

Anticipating (and embracing) the backlash she could get for that comment, Wolf continued, "Fox News, since I know you're watching, we made this to save you the trouble."

"Do you guys remember that article that said that Ivanka was 'America's most powerful Jewish woman'?" Wolf continued. "She couldn't keep a garment company in business, which I believe makes her the least powerful Jewish woman." She joked that Ivanka is "less successful than every poor Fiddler on the Roof character who came here in 1900 to sell fabrics on West 30th Street."

As she often does, Wolf also threw in some moralizing wisecracks. She argued that political commentators shouldn't act as though the first daughter is less reprehensible than her father, because she's still "a Trump."

"The next time you're tempted to respect Ivanka or give her the benefit of the doubt, remember: She's just Donald Trump if he drank water and had a better wig," Wolf said.

The comedian landed a few final quips about the first daughter to finish off. "Ivanka is so damaging to women that she causes toxic shock syndrome — she shouldn't be left in the White House for more than eight hours," she said. She also brought up Jared Kushner: "Ivanka, if you were any worse of an example for your children, you'd be your husband."

Wolf's cracks at Trump never fail to scorch. At the White House Correspondents' Dinner, she joked that the first daughter was "as helpful to women as an empty box of tampons." On one particularly brutal prior episode of The Break, she compared Trump to herpes ("you're very unpleasant, totally incurable and you always show up when we’re about to get f*cked") and vaginal mesh ("you were supposed to support women, but now you have blood all over you and you're the center of a thousand lawsuits").

Michelle Wolf's The Break, which had its series premiere on May 27, airs every Sunday night on Netflix.