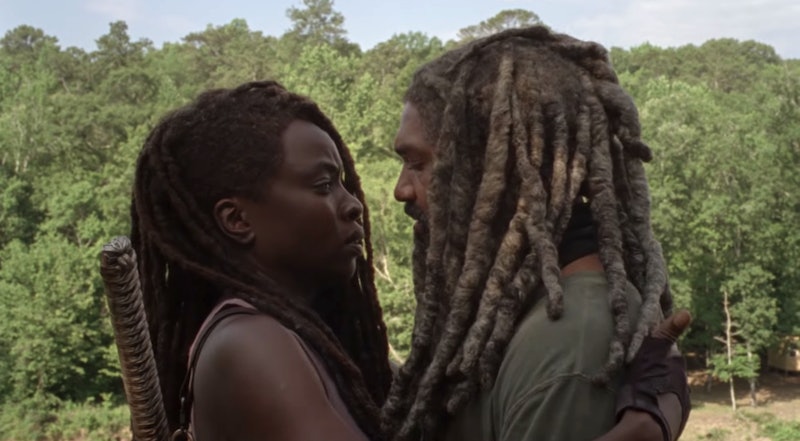 Spoilers ahead for The Walking Dead Season 10, Episode 4. After having lost his son, his Kingdom, and his wife, King Ezekiel has been struggling in The Walking Dead Season 10. Yet, his sadness reached a breaking point when Ezekiel kissed Michonne on The Walking Dead. The Comic-Con trailer for the new season made it look like Michonne and Ezekiel could couple up (as their characters have done in the comics). But the Oct. 27 episode showed just how misleading that preview was. Because while Ezekiel and Michonne are fond of one another, this kiss was more a cry for help than anything romantic.

When a tree falls down and breaches Hilltop's walls, Ezekiel is distracted and not in leadership mode to take care of it. While going to Hilltop to help with the emergency, Michonne spots Ezekiel riding off by himself. She finds him at the edge of an elevated platform, presumably considering jumping off. He feels that he has failed in his personal life and as a leader. When Michonne shows him kindness by grabbing his hand, Ezekiel gets overwhelmed by emotions. He pulls her in for a tight embrace and then kisses her.

Michonne may be taken aback, but she isn't insulted by the gesture. Instead, she empathizes with him. Michonne notes she was once in this dark of a mental space when she was out on her own and she also knows what it's like to lose a "partner in crime" in the zombie apocalypse.

They head to the Hilltop as friends and leaders — making it quite clear that they have no intentions of becoming a couple. Michonne says that while Ezekiel is "not a half-bad kisser," they are both too stubborn to be in a relationship together. And Ezekiel seems to acknowledge the romance that exists between them in the comics when he says, they could have worked out "maybe in another universe."

Showrunner Angela Kang had confirmed that Ezekiel and Michonne would kiss this season to TVLine. But she kept the details of their relationship vague. "The characters have always had a respect for each other," Kang said. "They like each other. [And their relationship] feeds into the journeys they're on this season."

As for their journeys, Michonne is headed to Oceanside from Hilltop upon reports that there might be Whisperers there. With suspicions that Whisperers had been at Alexandria and they could have made the tree fall, she's going with Judith to investigate this possible coordinated attack. So Michonne doesn't have time for romance — especially since this is Danai Gurira's final season and she could possibly appear in the Rick Grime movies. Of course, that might only happen after she takes on the Whisperers.

Ezekiel acknowledged he wasn't sure what he was going to do on that ledge. But after Michonne helped him to feel less alone, he seemed in a better place in his leadership role at Hilltop. He'll work on rebuilding the surrounding wall with some help from Eugene. Yet, fans may need to still be worried for him since Khary Payton noted to INSIDER how his character could die this season (with the caveat that any Walking Dead character can die at any time). But if King Ezekiel does die in Season 10, he will hopefully do so not thinking he's a failure with the knowledge that he has support and love through friends like Michonne.