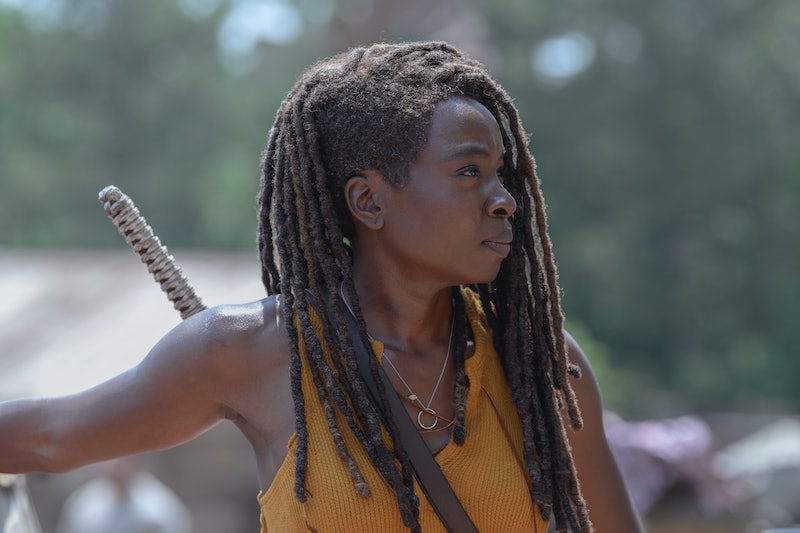 We've seen how Rick Grime's presumed death has affected Michonne on The Walking Dead in many ways, but in this exclusive clip of a scene from Season 10, Episode 4, she actually opens up to another person about her grief in a rare show of vulnerability. Michonne and King Ezekiel bond on a bridge in this Walking Dead clip, which not only proves there is still time for quiet, reflective moments during the Whisperer War, but that the show might be pulling some intriguing source material that should intrigue fans of the comics. rom the comics intrigue fans of the comics. The bond between these two characters could grow into something more, given that the two leaders were romantically involved in the graphic novels.

Losing a loved one is harder the second time around, Michonne says in the clip below. It's been a while since Michonne reflected on that part of her history on The Walking Dead. Before the apocalypse, Michonne was living with a man named Mike. When he was bitten by walkers and reanimated, Michonne chained up him and his friend Terry and turned them into "pet" zombies that flanked and protected her, which is how viewers first knew her on the series. Michonne has never been particularly good at handling grief in a traditionally healthy manner on The Walking Dead.

"You get used to having someone there," Michonne says, clearly missing Rick. "That partner in crime. That sounding board. That walk. Now it's all on you. Just you." This time, with Rick Grimes gone, Michonne is not alone. She has a support system at Alexandria. She has Judith and R.J. to take care of and keep her company. She also, as this clip reveals, has Zeke — who is mourning Henry as well as his relationship with Carol.

Is this connection teasing a potential romance, or partnership, between Michonne and King Ezekiel? In the comics, Zeke is Michonne's love interest after Tyrese and Morgan. (Carol doesn't exist in the comics, and Rick gets together with Andrea after Lori dies.) Michonne and Ezekiel are kissing in the Season 10 trailer, too, and it looks like the same scene as the above clip.

For now, she's figuring out her place in the world now that Rick Grimes is gone and she has to let him go. However, at some point this season, Danai Gurira is expected to leave The Walking Dead. As Rick's disappearance proves, that doesn't necessarily mean that Michonne will die. We don't know where this Season 10 journey will take Michonne. But maybe, just maybe, Ezekiel will be that new partner in crime joining her.