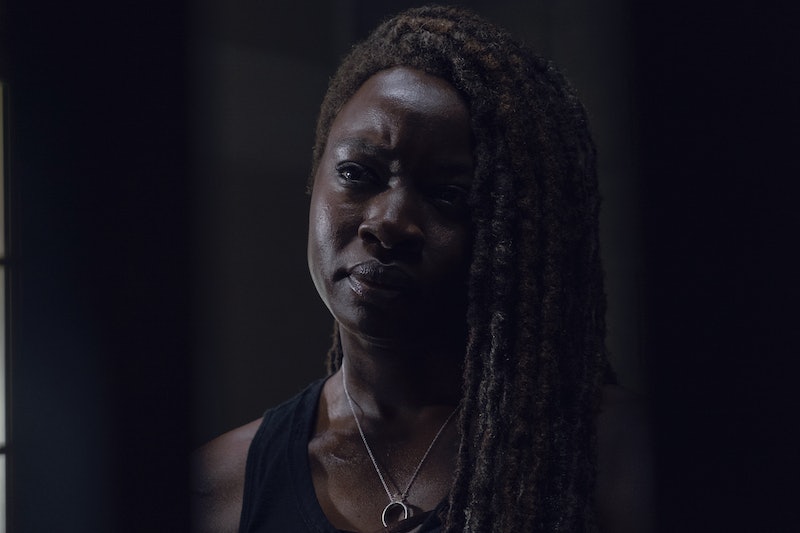 Nobody is safe on The Walking Dead, but time jumps, spin-offs, and movie deals have awarded the AMC series with new and creative ways for veteran cast members to bow out without meeting a gruesome end. Reportedly, Danai Gurira is leaving The Walking Dead — but Michonne's last episode won't be any time soon.

According to The Hollywood Reporter, Gurira will exit the series in Season 10, appearing in "a limited capacity," or a "handful of episodes" in the upcoming year. So she is returning for one more season, just like Andrew Lincoln and Lauren Cohan did in Season 9. That also means that we have Michonne for the rest of the current season,

Whereas Lincoln's final episode as Rick Grimes was widely publicized, Cohan's last episode as Maggie was quiet, and fans basically had to be told that it happened after the fact. Neither character was killed off, and Lincoln for sure will appear in some of AMC's upcoming Walking Dead feature films. So it's hard to say if we'll even know which episode is Michonne's last. That depends on what happens to her, too. If the character dies, that answers that, but the films offer a new possibility for the character to exit the show and live on in the narrative of the TWD universe. Plus, if Rick and/or Maggie is indeed headed to the Commonwealth, they could all three meet again. That's where she ends up in the comics, after all.

“Well, I’m going to keep that one to myself,” Gurira told Entertainment Weekly when asked about leaving in Season 9. “But what I do know is that we are a very close-knit family, and we love each other, we love this experience, and we all will have our own narratives about how, and where, and when [we want to leave]. But the thing we enjoy is that it’s an incredible time we are able to have and been able to have with each other.”

Personally, my guess is that we'll say goodbye to Michonne in the midseason finale of Season 10 — much like how Rich was kidnapped and Maggie hit the road at the midpoint of Season 9. However, The Walking Dead loves to subvert expectations, and then subvert those expectations again and again until you don't even know what to expect. So don't be surprised if they mix it up, and Michonne's limited number of Season 10 episodes leading up to her departure is somehow unconventional.

Michonne will certainly be missed on The Walking Dead, but Gurira surely has so much on the horizon. How fun was it, in 2018, watching the world discover what a bad*ss she is in Black Panther? According to Deadline, she has two potential film franchise roles coming up, in the fourth Kelvinverse Star Trek film as well as Godzilla vs. Kong. She has also started the organization and pledge initiative Love Our Girls, which seeks to amplify female voices and experiences and celebrate woman and girlhood. Gurira is also an award-winning playwright, and a freakin' United Nations Goodwill Ambassador. There's so much!