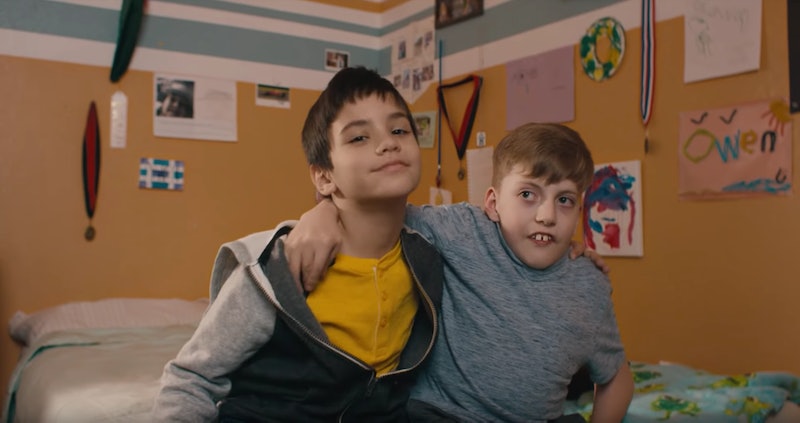 The Super Bowl usually doesn't result in tears for viewers until the very last touchdown, but Microsoft's 2019 Super Bowl ad, which will run during the big game on Feb. 3, is sure to warm your heart and turn on the water works. The ad focuses on the adaptive controller Microsoft created for Xbox and the kids of different abilities who can now play video games like pros because of it.

The controller is described on the official Microsoft website as having "large programmable buttons" that connect to the external playing device, in this case Xbox and Windows 10, to make the function of joysticks or buttons easier for those who might not be able to use the original controllers effectively. The site also claims that the device was developed "primarily to meet the needs of gamers with limited mobility."

The extensive look at the controller isn't the best part of this new ad, though. No, that title goes to the kids featured in the ad, who are all ecstatic about this new device. Old devices, as one mom says in the video, didn't allow for a full experience for children with different abilities. "When i'm playing with a regular controller, there's some things that don't work for me," one kid says in the ad. One mom featured adds that her daughter "never had the freedom to play at the level she knows she could" while using the old controllers. As some kids note in the ad, the original controller was limited, especially for players who might not be able to use both hands to play with.

One kid featured, Owen, who is also featured in another ad for Microsoft, mentions that regular joysticks and D-pads were difficult to use at the same time. Another says, "It just slowed me down a bunch more while other people were like —" before proceeding to mimic how quickly others would be able to maneuver the old controllers. Adds another, "I had never thought it was unfair, I just thought 'Hey, this is the way it is and it's not gonna change.'"

But things don't always have to stay the same, and seeing the kids using the adaptive controller in the ad, playing with friends and enjoying themselves, is a heartwarming reminder that change can be a very, very good thing. As Owen's dad says, gaming is a way for his son to interact with friends "when he can't physically otherwise do it."

Watching the kids in the ad play to their hearts content will definitely make you cry from happiness — or at least, fill your heart with all of the feels. Especially when you hear them talk about how they "don't even have to look at the controller" anymore, or can "hit the buttons just as fast as" other kids can. "I think I can crush my friends," one child says happily.

Owen closes out the ad by saying, "No matter how your body is or how fast you are, you can play. It's a really good thing to have in this world." And with that, the ad has cured any bad mood you might have had earlier today.