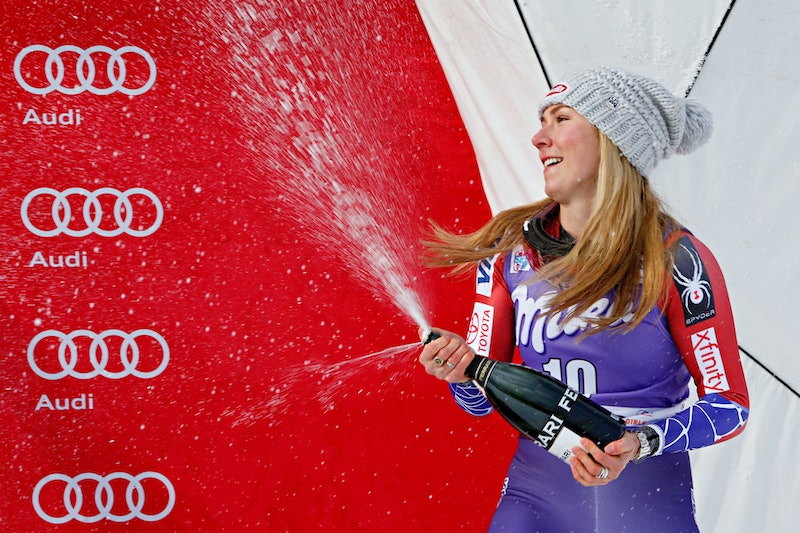 Considering she was dubbed the best slalom skier in the world by The New Yorker, Mikaela Shiffrin's net worth could skyrocket should she manage to take home the gold during this year's 2018 Olympic Games, according to Forbes. In 2014, the outlet reported that Shiffrin would pocket a $25,000 bonus from the U.S. Olympic Committee for the gold medal won at the Sochi Olympics that year. They also reported that Shiffrin's earnings had the potential to soar into the $30-50 million range if she remained at the peak of her career over the next few years.

The New Yorker reported in Nov. 2017 that, although the Olympic skier has earned millions of dollars from endorsements and prize money, she still lives at home when not competing while her father helps to keep a close eye on her growing fortune. She was only 18 years old when she took home the gold and became the youngest slalom champion in Olympic history during the 2014 Winter Games in Sochi, Russia. From that moment on, Shiffrin set the pace at which she could become a top earner in her sport — and, as you might imagine from that accolade alone, she's been excelling ever since.

Though she outpaced competitor Lindsey Vonn, who did not win an Olympic medal until 2010 at age 25, Forbes reports that Shiffrin has the potential to, at the very least, match Vonn's monetary success. The 33-year-old skier earns approximately $3 million a year through endorsements. As two of the best athletes to ever compete in the sport, Shiffrin and Vonn will be on hand in Pyeongchang to represent Team USA at this year's Winter Games. The Denver Post reports that the 22-year-old has the potential to make history at this year's games by becoming "the first American woman to win three medals in skiing at one Olympics and the first American of either gender to claim three gold medals."

While on the journey to the 2018 Olympics, Shiffrin discussed some of the perils that come along with her quest for wold domination in sport. Speaking to the New Yorker's Nick Paumgarten at the end of last year, the skier revealed that her nerves had been getting the best of her lately: “I never used to feel nervous... just excited. But this past season I got so nervous I had to throw up a couple of times.”

The 22-year-old's jitters reportedly began during the International Ski Federation World Cup at Killington, in Vermont. She went on: “Killington was a lot of pressure, and I didn’t realize it till I was there. I was kind of freaking out.” She also revealed that she ultimately decided to seek out the help of a therapist for her issues, and it certainly seems to have helped her. After all, Shiffrin appears to be ready to take on the slopes in Pyeongchang.

During her campaign to become the sport's greatest, Shiffrin dons a helmet inscribed with the letters "A.B.F.T.T.B." — an acronym that stands for "always be faster than the boys" — during competition. For the next two weeks, the 22-year-old will have the opportunity to solidify her place in the Olympic history books while becoming an inspiration to the many who will tune in to cheer her on.

As one of the most talked about US athletes to compete in the 2018 PyeongChang Games, the skier's road to victory will begin with her first race in giant slalom on Feb. 11. Considering her net worth is continuing to grow at a rapid pace, it's safe to say that fans will be seeing Mikaela Shiffrin's talent and face for many years to come.