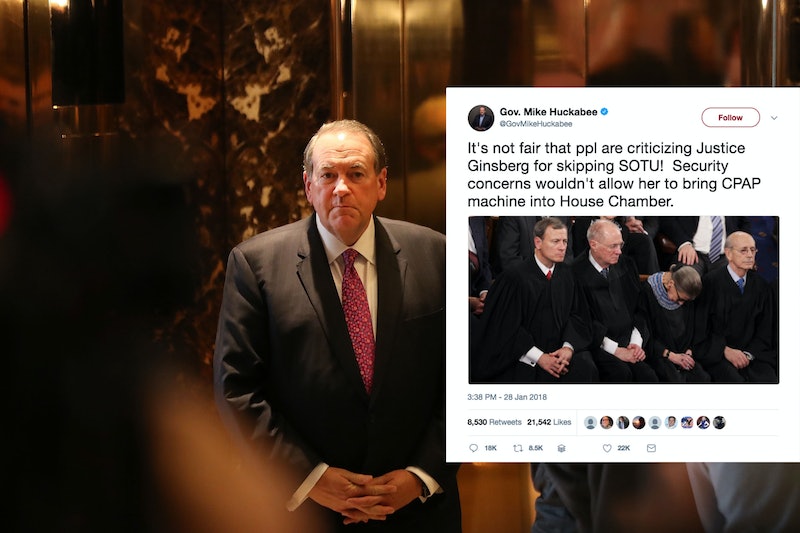 Former Arkansas Gov. Mike Huckabee, father that he is, is probably used to letting the occasional dad joke fly without getting much of a response. The myriad reactions to Huckabee's Ruth Bader Ginsburg joke on Twitter, though, may have surprised him. After it became clear that Supreme Court Justice Ruth Bader Ginsburg wouldn't be attending President Trump's first State of the Union address, Huckabee took it upon himself to tweet a response to this piece of news — in the form of a joke about the justice's age.

Huckabee made reference to President Obama's 2015 State of the Union, when Ginsburg famously fell asleep. She would later say that she'd had a few drinks beforehand. "It's not fair that ppl are criticizing Justice Ginsberg for skipping SOTU!" Huckabee tweeted. "Security concerns wouldn't allow her to bring CPAP machine into House Chamber."

Huckabee is no stranger to cracking jokes on Twitter, but the responses to his Ginsburg joke have been both fierce and varied. They really run the gamut, but they all center on the same theme: Huckabee should not have joked about a Supreme Court justice's age.

He took heat from the political world, with Rep. Carlos Curbelo (R-FL) saying that it was a "despicable, tasteless joke" and that Huckabee was "politically intoxicated." Former Fox anchor Greta Van Susteren kept it simple in her criticism, saying merely, "I hope Gov Huckabee apologizes."

Others reflected on the ways that Huckabee responded to criticism of his family in the past. Given those past reactions, people noted it seemed hypocritical that Huckabee would be willing to make a joke like this about someone else. After SNL's Aidy Bryant depicted his daughter, Sarah Huckabee Sanders, in a sketch, the former governor called the portrayal "a little bit silly, sexist, misogynist." Another Twitter user pointed out a more serious case, when as governor, Huckabee reportedly intervened in the Arkansas judicial system after his son allegedly killed a dog.

Many others responded in kind, ribbing Huckabee for his perceived level of fitness. They pointed out that Ginsberg is in remarkably good shape and suggested that Huckabee would be unable to keep up with her at the gym. "Mike Huckabee would wave the white flag of surrender after only a few minutes of Ruth Bader Ginsberg's workout regimen," said one commentator on Twitter.

Still others raised a more serious point that gels with what's become something of a recurring theme under the Trump administration: evangelicals misbehaving. "Not very Christian of you, Governor. You know better," said one Twitter user. Huckabee's always made it clear that his conservative Christian faith is an important part of his life. Many people apparently saw his joke as yet another instance of evangelicals being hypocritical in the Trump era.

Lastly, some noted the obvious: Huckabee simply made a bad joke. "Keep trying, cupcake. You'll make a funny one of these days," said one Twitter user.

Really, though, Walter Shaub, former director of the Office of Government Ethics, summed up all of the responses in six little words: "What is the matter with you?"

Perhaps in the future, Huckabee will refrain from making a lowbrow joke about a revered judicial or other government official. Based on his Twitter history, however, it's likely that Huckabee will be right back at it tomorrow.