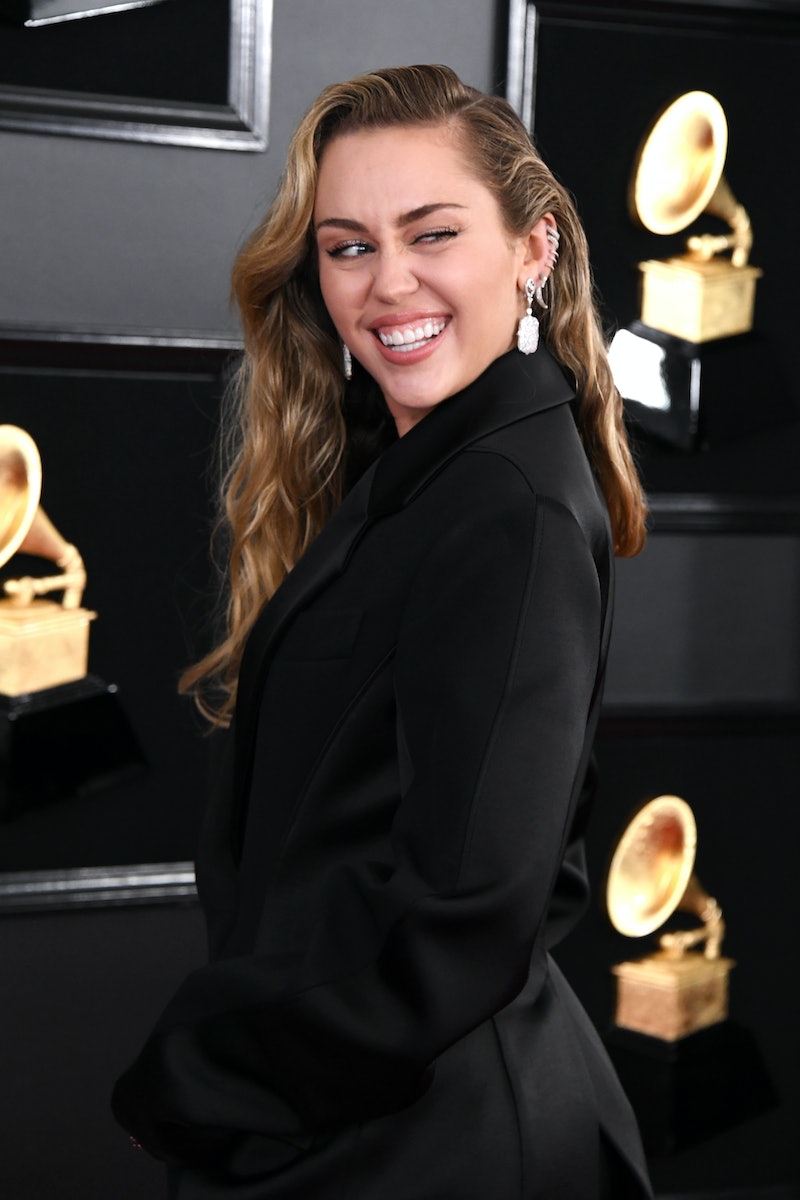 Artists who make a comeback to the main stage are always one of the most entertaining highlights of an award show, and Miley Cyrus' Grammy suit stole the hearts of anyone who loves head-to-toe black. You'll probably want, like, three of these in your closet on the off chance you wear suits every day of the week .

The newly wed singer made her return to the red carpet in a black satin blazer with a matching pair of suit pants that featured a flare detail at the bottom. The footwear Cyrus brought to the show was also slay-worthy. The "Nothing Breaks Like a Heart" singer wore shoes that many would love to slip on just for an impromptu Instagram photoshoot. When you're Miley Cyrus, though, you can wear just about anything you want, whenever you want — including on the Grammys stage.

While Cyrus has donned bold looks in the past, she changed up her style at this year's Grammys to reflect a more demure Carrie Bradshaw-esque look. Cyrus has typically worn her hair in a tight updo and even let her down in curly waves, and this year, she went for classic old Hollywood waves for her Grammy arrival.

While Cyrus isn't nominated for anything in this year's categories, she will be bringing her country pop style to the forefront on Grammy's stage via a performance with Shawn Mendes.

Cyrus is definitely into the oversized look — something that's a trend with many fashionistas lately. Just look at Ariana Grande and her signature oversized sweatshirts. Cyrus went braless in a blazer that featured a set of ruched puffer sleeves, a plunging neckline, and satin lapels. That's one way to break the mold of red carpet gowns in an all-black pant suit.

Not only did Cyrus prep her outfit for tonight's Grammy Awards, but she also prepped her skin, so her makeup would sit its prettiest on her face.

According to a press release, the singer received a customized skin treatment from Beverly Hills facialist Biba de Sousa. And the entire regimen is extensive to say the least. The routine started with a diamond peel, followed by a microdermabrasion with baking soda and a microcurrent "London Lift" to stimulate muscles. Finally, the treatment was topped it off with red light therapy, a non-LED and non-thermal treatment that helps stimulate collagen.

Cyrus gave the Grammys crowd a performance that fans have probably been waiting for for a long time. Cyrus sang next to Shawn Mendes, coming out from behind the stage under a set of twinkling lights just after Mendes had started singing his hit song.

Mimicking the androgynous look she donned on the red carpet, Cyrus wore another suit-inspired ensemble, sporting a velvet embroidered vest clasped by a small chain along and a matching pair of pants.

For fans who have followed the singer's career since her Disney days or fans of Mendes, this is a real treat. One thing's for sure, Miley's just a little bit country, but also a little bit rock n' roll — and her wardrobe is probably somewhere in between.