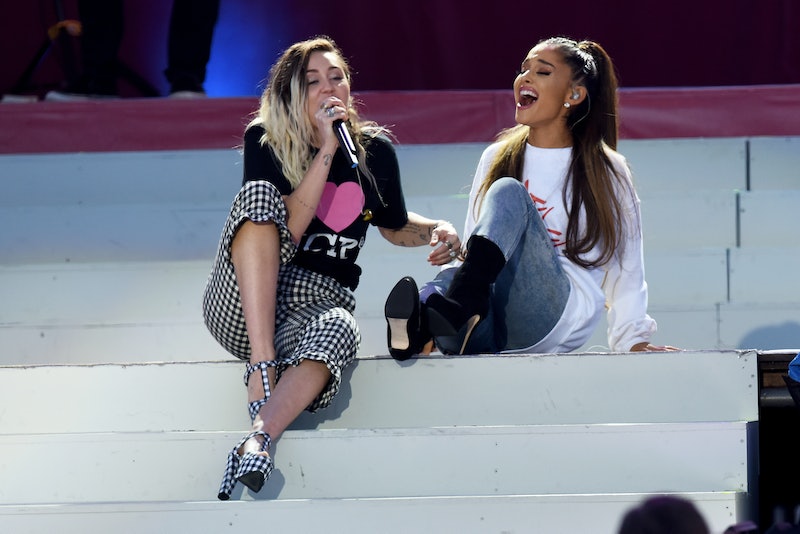 Next time you find yourself trying to figure out if you or someone you know is a Millennial or part of Generation Z, perhaps you should consult Miley Cyrus’s “7 Things” and “7 Rings” post. On Monday, the artist formerly known as Hannah Montana shared a snippet of her 2008 Teen Choice Awards performance in which she runs into the crowd and sings "7 Things" with Selena Gomez. "Your generation = 7 Rings MY generation = 7 Things," Cyrus tweeted. "Simpler times." The video made its way onto the "Nothing Breaks Like a Heart" singer's Instagram account too, where she included a #MillenialsVSGenZ” hashtag in the caption.

Cyrus is, but of course, talking about her fantastic 2008 single "7 Things" and her buddy Ariana Grande's current tremendous hit "7 Rings." As she has made darn well clear on social media a number of times, Cyrus is a huge fan of Grande's tune (duh), but she is also feeling nostalgic for the "simpler times" when she was a Disney Channel star jamming out with her fellow Disney Channel stars at an award show. (Hey, aughts nostalgia happens to the best of us.) Grande, Gomez, and Cyrus do not belong to different generations, but these two wickedly catchy pop songs about the number seven just might?

There's been a lot of debate over the last several years regarding who is and is not a Millennial, but this tweet basically hits the nail on the head. According to Pew Research Center, anyone born between the years 1981 and 1996 are Millennials, while anyone born in 1997 to 2012 are Generation Z. Cyrus and Gomez were born in 1992, and Grande was born in 1993, so that makes all three of them Millennials.

Though the artists behind the two songs are from the same generation, "7 Things" feels like a lifetime away from "7 Rings." "7 Things" came out in '08, which means it arrived on the airwaves before some Gen Z-ers were born. Sure, there are plenty of Gen Z-ers who would've been old enough to love and appreciate Cyrus' breakup jam when it first came out, but like The Hills, iPods, and Spaghetti Cat, "7 Things" is an extremely '00s artifact. And so, in the Millennial pile it goes. "7 Rings," meanwhile, is very 2019. When you listen to the two tracks back-to-back, it is like buying your ears a first class ticket for a time machine that only visits 2008 and 2019.

You know you are a member of the Millennial generation when you look at the fashions happening at this award show and think "Ah, it really feels like just yesterday when I was regularly pairing bedazzled jewel tone strapless empire waist blouses with distressed low-rise bootcut jeans."

And Grande is right there with us, fellow Millennials.

I will tell ya seven things I don't hate: Cyrus, Grande, Gomez, "7 Things," "7 Rings," pop superstars being friends, and letting the '00s nostalgia flow like gloss out of a Lancôme Juicy Tube.