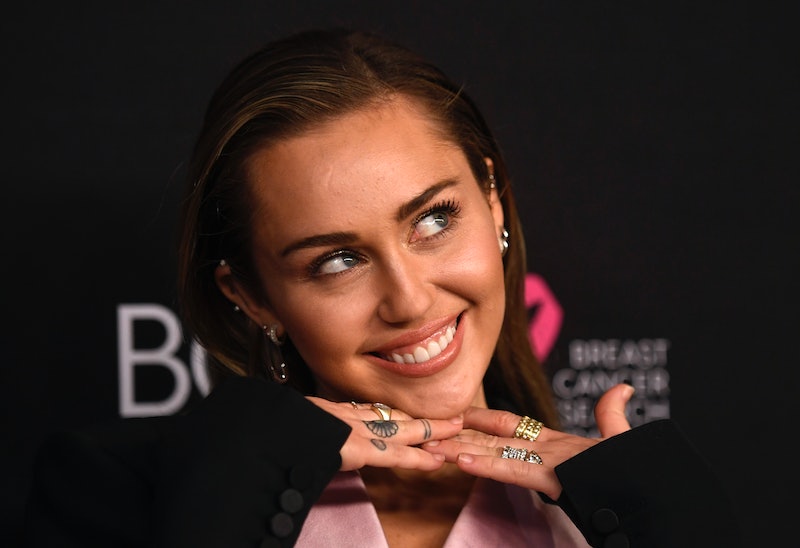 Sunday, March 24, marked the 13-year anniversary of Hannah Montana's premiere, and Miley Cyrus marked the occasion in a way that only she could. Cyrus celebrated the Hannah Montana anniversary by sharing stills from the show on her Instagram Story, adding her own captions to poke fun at the images.

Cyrus started things off by posting a shot of Hannah giving some major side-eye over a pair of sunglasses, writing, "Hannah watching the 2013 VMAs / Happy 13th @hannahmontana." Her caption, of course, is a reference to Cyrus' own infamous VMAs performance with Robin Thicke, which raised plenty of eyebrows thanks to her twerking.

The singer also referenced her post-Hannah music career by posting a picture of the character holding a finger to her lips, a reference to the fact that the pop star's true identity was a secret. "After Hannah's psychic reading when she was told in 10 years she'd become a big stoner and wear nipple pasties on stage," Cyrus captioned the picture.

It's clear that Cyrus isn't afraid to joke about how much she's changed since her Disney Channel days. But she's also not apologizing for who she's become. The singer may not be anything like her Hannah Montana character, but it looks like she still shares a certain nostalgia for the show.

Cyrus also used the old Hannah Montana photos to emphasize some of the social justice causes she believes in. Sharing a picture of her character in a wrestling outfit, Cyrus wrote that Hannah was "ready to FIGHT for gay rights!"

And atop a silly photo of her character, Miley Stewart, doing a muscle-flexing pose, Cyrus wrote, "Girls are what???? Strong!"

Cyrus also used a photo of her character to illustrate her love for the Real Housewives series. Sharing a still of Miley Stewart eating a bowl of popcorn and glaring at something offscreen, the singer wrote, "Me when anyone even breathes audibly and disrupts my Real Housewives of Beverly Hills binge."

The "Nothing Breaks Like a Heart" singer also tweeted what looks like a newspaper photo showing her before Hannah Montana started filming. "It's the 13th anniversary of the first HM episode to air," Cyrus tweeted.

The show's pilot, in which Emily Osment's character learns that Miley Stewart is also Hannah Montana, aired on March 24, 2006. And Hannah Montana's run lasted four seasons on the Disney Channel, coming to an end in January 2011.

Back in 2013, Cyrus joked during a Saturday Night Live appearance that Hannah Montana was dead. It looks like she's had a bit of a change of heart since then, though. Cyrus clearly had fun joking about her Hannah Montana character with the throwback pics, even if she and Miley Stewart are totally different.