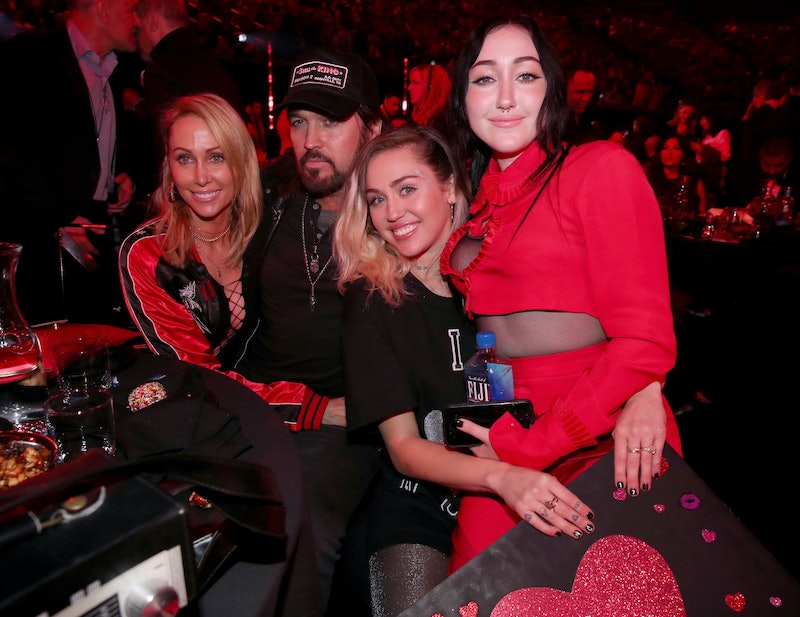 Miley Cyrus and Liam Hemsworth have officially tied the knot, and they're sharing more photos from the special day with their fans. On Thursday evening, the Cyrus family posted a few snapshots from the wedding, and they're absolutely gorgeous. Miley Cyrus' family photos from her wedding show how close she is with her parents, who look super happy to see their daughter get married.

Cyrus and her parents shared the same photo of the three of them standing under a floral archway. The "Nothing Breaks Like A Heart" singer chose to post a black-and-white version, while Tish and Billy Ray Cyrus shared the color version. "Congratulations @mileycyrus and @liamhemsworth! Long live love!," Billy Ray wrote in his Instagram caption. Miley's mom, meanwhile, wrote, "This makes my heart so happy .... 💗"

Tish also shared another photo of her husband and daughter on the big day. It's clear that there's a special bond between Miley and both of her parents, and it looks like the wedding day was absolutely filled with love all around.

The couple opted for a low-key wedding, which perfectly encapsulates their relaxed, comfortable relationship with each other. When you're in love, you don't need a huge ceremony if it's not something you want. And it looks like Cyrus and Hemsworth were perfectly happy to tie the knot at home, surrounded only by their closest loved ones.

Billy Ray also shared a photo of his daughter, Hemsworth, and some other family members. The picture is a bit grainy — according to the "Achy Breaky Heart" singer, he took it with his Blackberry. "Wedding wouldn't be complete without one shot from Dads out dated blackberry camera. Love seeing all so happy," he wrote in his Instagram caption.

The photo is of the newlyweds' cake cutting, and both of them are smiling as they get ready to tuck into the two-tier cake. Miley's sister Noah Cyrus is also visible in the back of the photo, as are some other loved ones. On Sunday night, Noah shared a photo of herself crying at the wedding on her Instagram Story, though that was before the couple confirmed that they were, indeed, married.

As for the Hemsworth family, they were definitely represented at the festivities, too. The couple's friend Conrad Jack Carr shared a video on his Instagram Story of the Hemsworth brothers doing a shot on the night of the wedding. Carr's Story also showed a set of "Mr." and "Mrs." balloons in the background, which tipped fans off to the fact that Cyrus and Hemsworth had likely tied the knot.

Cyrus confirmed that she and Hemsworth were married with a set of Instagram photos of the wedding. "10 years later .....," she captioned one post. "12.23.18," the singer wrote in another caption.