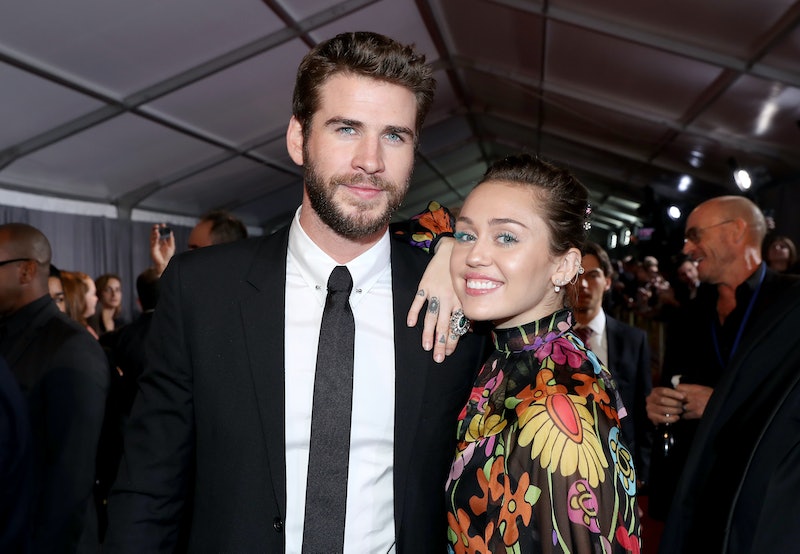 Imagine you're set to star in an incredibly romantic movie, and Liam Hemsworth shows up to audition for the part of your love interest. Pretty exciting, right? Well, it didn't exactly play out that way at the time for his now-wife. Miley Cyrus' first impression of Liam Hemsworth wasn't great, according to a 2009 interview with Seventeen that Us Weekly recently unearthed. She actually went so far as to call the experience "gross." Yep, "gross."

Back in December 2009, Cyrus admitted to Seventeen that she wasn't all that impressed with Hemsworth before he was cast opposite her in The Last Song. She told the magazine,

"I heard a rumor that he didn’t really want the role. And when he came in to audition for the role, I'm thinking, 'Here’s this guy, he’s amazingly good-looking, super confident and he doesn’t realize how blessed he is to be in this room, because I know how blessed I am. This is such a big opportunity for both of us.' And I was thinking, 'Ugh, gross.' You know?"

After their initial meeting during the beginning of The Last Song's audition process, Cyrus changed her tune. "Then I started talking with him and he was just the most genuinely precious, sweet person," she explained to Seventeen in the same interview. "And the second audition comes around and the chemistry was instant. From the time he walked in that door and we saw each other again, we lit up and we were excited to get [to] work and learn together."

And the rest, as they say, is history. Well, kind of. Like any normal couple, Cyrus and Hemsworth encountered their fair share of bumps in the road before deciding to tie the knot on Dec. 23, but all of those bumps clearly helped make their love as strong as it is today.

After the couple made their red carpet debut together at Elton John's AIDS Foundation Oscar Viewing Party in March 2010, they were pretty much a tabloid fixture for the next several years. They'd break up, make up, break up again, make up again — and then in June 2012, Cyrus confirmed she and Hemsworth were engaged. "I'm so happy to be engaged and looking forward to a life of happiness with Liam," she told People at the time.

By September 2013, they'd decided to call it quits. The pair seemingly remained somewhat friendly until late 2016, when Cyrus basically confirmed months of reconciliation and re-engagement rumors during an appearance on The Ellen DeGeneres Show on Oct. 27.

Flash-forward to now — more than 10 years after they first started dating — and Cyrus and Hemsworth are officially husband and wife. Cyrus might not have been smitten with her Last Song costar in the beginning, but it's abundantly clear that they're both beyond smitten with each other now.