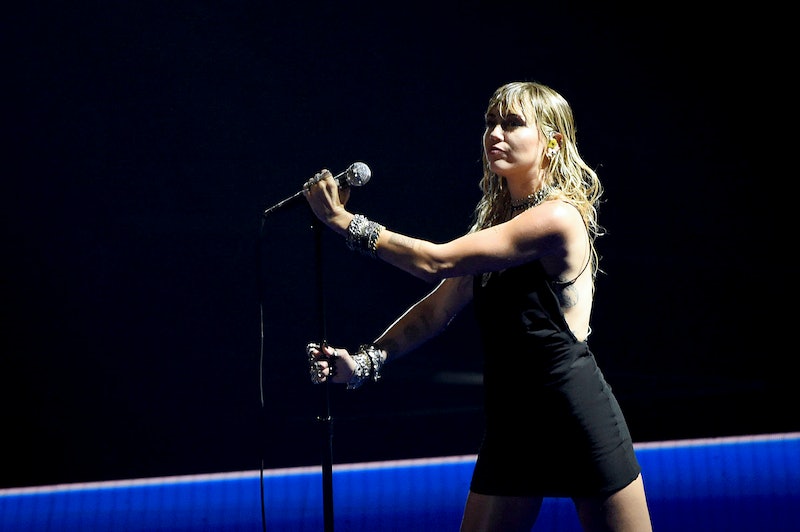 Miley Cyrus delivered a powerful performance of her song "Slide Away" at the 2019 VMAs on Aug. 26. She did so in a simple LBD, which she paired with stacks upon stacks of bracelets and necklaces and a wet head look. Miley Cyrus also debuted two tiny new tattoos at the ceremony. If you missed them, well, you're not the only one. Most fans were wholly focused on her emotional performance and her minimalist, '90s-inspired slip dress. Cyrus' latest inkings may be tiny but each piece appears to have its own powerful meaning.

Allure reports that Cyrus got the new tattoos from Los Angeles-based celebrity tattoo artist Winter Stone, who is known for his delicate yet sharply detailed lines. Stone has inked plenty of Cyrus' fellow former Disney stars like Demi Lovato, Hilary Duff, and Joe Jonas. He has also tattooed Lady Gaga, Chrissy Teigen, Sophie Turner, Mandy Moore, and others. So his shop is clearly an A-list hot spot.

A rep for the Stone told Allure that Cyrus added two new pieces to her ever-expanding tattoo collection, which is already 40 pieces strong. The first tattoo is a profound lyric from the song "The Thing" by '90s alt rock icons The Pixies. The tattoo reads "my head was feeling scared, but my heart was feeling free" in lower case lettering. The lyric is broken up into four lines that live on Cyrus' bicep and you can see it below.

While fans might be quick to speculate whether or not Cyrus' tattoo is a reference to her headline-grabbing split from husband and longtime love Liam Hemsworth after less than a year of marriage or her possible new romance, it's a strong quote that can be applied to many situations in life. Tattoos are a highly personal form of self-expression and this piece likely has a deep meaning for the singer. But fans won't know what it truly means until or unless Cyrus tells them.

The second tattoo is the year 1961 etched onto Cyrus' left hand. Allure reports that this inking is a reference to the year that her father, singer Billy Ray Cyrus, was born. The elder Cyrus, who is experiencing a pop culture Renaissance thanks to his smash hit single "Old Town Road" with Lil Nas X, celebrated his 58 birthday over the weekend. So it was a fitting tribute from his just-as-famous daughter. This hand tattoo was not fully visible at the VMAs, which is likely due to its size and all of the bracelets and rings that Cyrus accessorized with.

Bustle reached out to reps for both Cyrus and Stone for additional information. Stone's team responded to Bustle via email, confirming that all of the aforementioned details are correct and that Stone should be posting images of the tattoos at approximately 11 a.m. PT on Aug. 27. As of press time, Cyrus has yet to post about her new body art.

These new tattoos aren't Cyrus' only recently acquired ink. She reportedly went to highly in-demand Los Angeles artist Dr. Woo to get a tattoo inspired by her Italian vacation. That particular tattoo boasts a slithering snake eating a man. The ink is situated on her forearm under a tattoo of her mother Tish's full name "Leticia Jean" written in script.

Cyrus can certainly be described as a tattoo collector. She is commemorating her life changes and experiences with fresh ink. She has lots of small, singular tattoos decorating different parts of her body and signifying periods of her existence. But they all come together to cohesively tell the Miley Cyrus story.

More like this
This K-Beauty “Wrinkle Bounce” Stick Is Going Viral On TikTok
By Destiny Knight
Meet Foreverist, The Skin Care Brand That Keeps Tattoos Looking Fresh
By Audrey Noble
Kendall Jenner's Cowboy Boot Tattoo Is The Cutest Micro-Ink
By Sophia Moore
Benefit Just Upped The Brow Game – Again
By Justine Knight
Get Even More From Bustle — Sign Up For The Newsletter