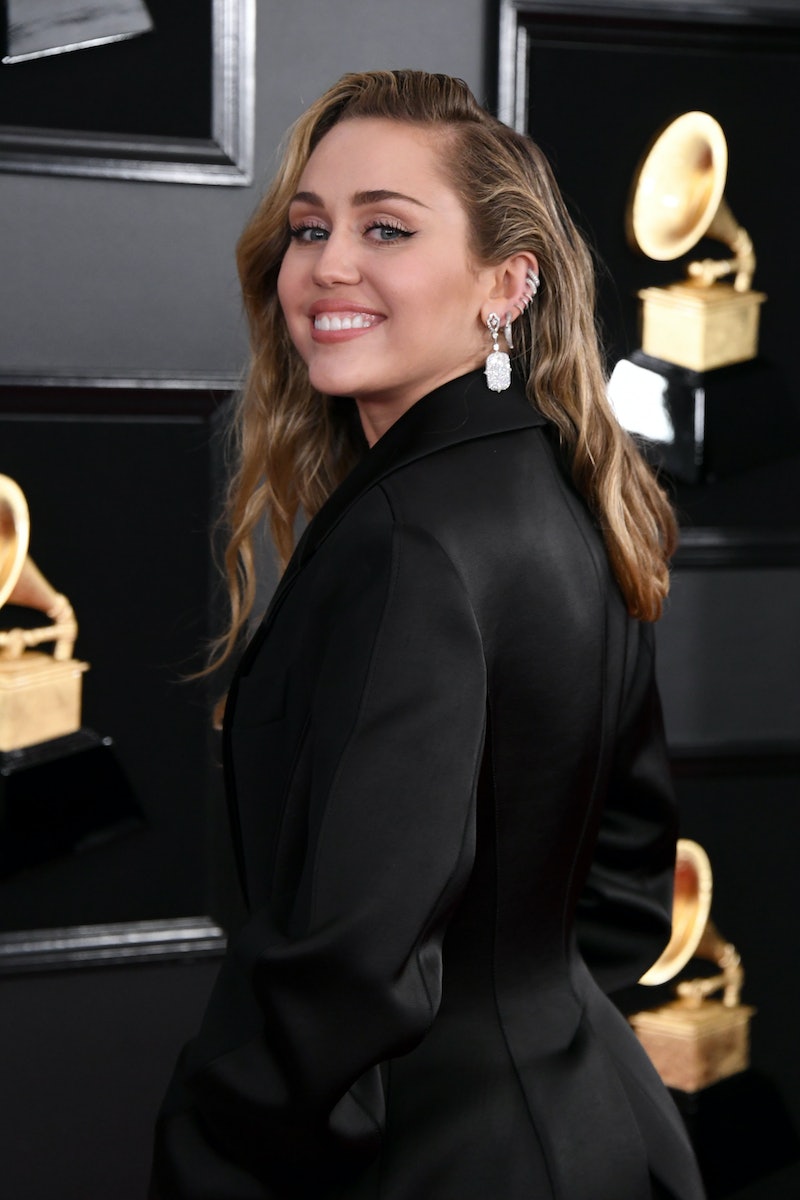 If only we could be a fly on the wall for this night out. Two worlds collided on Friday, March 22 when Miley Cyrus hung out with the Vanderpump Rules cast, or at least a few key members of it. According to an Us Weekly source, Cyrus joined owners Lisa Vanderpump, Tom Sandoval, and Tom Schwartz at their new bar TomTom along with Pump Rules cast member, Scheana Marie. It's a lot to process, we know.

The evening out was captured on Cyrus' Instagram Story, where she posted a video of her, Vanderpump, Sandoval, and a large, fluffy dog (naturally) dancing the night away. But those weren't the only SUR kids involved with this ultimate star meeting. DJ extraordinaire James Kennedy took to his own Instagram to post a video of him chatting with Cyrus via FaceTime. In the video, Cyrus can be seen doing a heart gesture with her hands. Scheana slides into frame while blowing a kiss before Sandoval and Kennedy chat excitedly.

The video doesn't have sound, so fans are left to wonder: what did these two musical masterminds discuss?! How long has Cyrus been pals with the Vanderpump Rules gang?! As it turns out, Kennedy's Insta caption may provide some insight. He captioned the video, "@mileycyrus and I on FaceTime?! Thanks @tomsandoval1 can't wait to play @shamrockfestdc tomorrow with @brandicyrus #333."

Brandi Cyrus is Miley's older sister and a DJ herself, so it makes sense that Kennedy and Brandi would collaborate. Is a Miley-featured Kennedy track coming soon? It's hard to say, but we'll be penciling it into our Vanderpump Rules Season 8 wish list immediately. One can only speculate about Cyrus' night with the Pump Rules gang: did they discuss Scheana's single "Good as Gold" over TomTom Tacos and tequila? Or perhaps Miley and Sandoval traded fashion tips over Ken's Crispy Chicken Sandwiches and specialty cocktails? Dream scenarios abound. But apparently Lisa Vanderpump called it a night before an after party with Miley and the Vanderpump cast members ensued.

Per Us Weekly's source, "They FaceTimed with James Kennedy who is deejaying a show [on Saturday] in DC with [Miley's sister] Brandi Cyrus. And they were dancing and enjoying the night together along with other friends too. Then Tom, Scheana and Miley headed to Doheny Room and hung out at a VIP table. They arrived there around 12:30 a.m. and stayed until 2 a.m."

It turns out the newly-wedded star may be one of a few celeb Vanderpump Rules fans who have hung out with the SUR crew. Jennifer Lawrence has spent some time at Pump while Chrissy Teigen has been spotted at SUR. The Vanderpump Rules cast gets into enough shenanigans as it is, so something tells us adding full-fledged celebs to the mix only makes the parties that much more iconic.

With Season 7 currently airing, chances are slim that Miley will be appearing on the Bravo series. But this new friendship is made for the 'gram and sure to pique interest in TomTom, Sandoval, Schwartz, and Vanderpump's bar, the opening of which is being chronicled on the current season of Vanderpump. For fans of the hit show, these are in fact the best years of our lives.