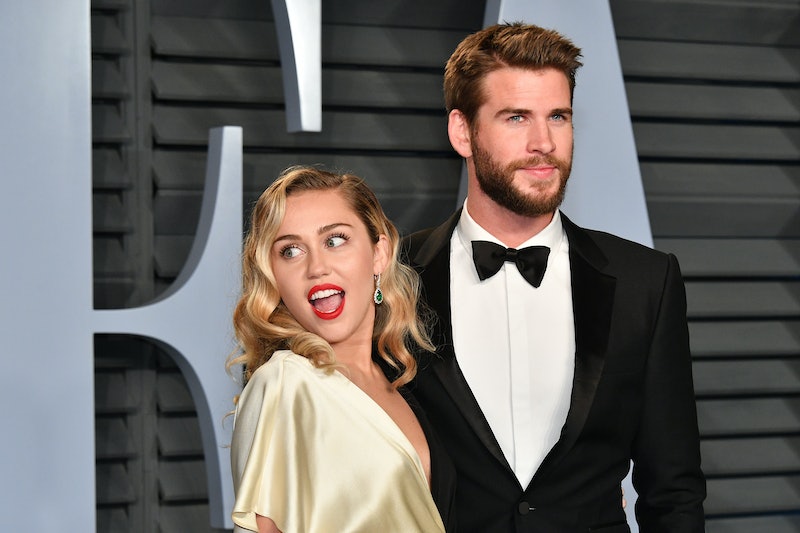 After a decade together, a movie, a breakup, and the most unexpected reunion, Miley Cyrus and Liam Hemsworth are officially married, helping the rest of us believe that truly love really does exist. One of the easiest ways to tell how much they mean to each other is through what they've said about each other in interviews. Hemsworth and Cyrus' past quotes about each other are adorable, because in the time they've been together, they've never held back when it comes to opening up about their relationship and how much they care.

Being that Hemsworth will likely to be in the audience to cheer Cyrus on when she performs at the 2019 Grammy Awards on Sunday night, there's no better time to take a look back at their relationship. Through the years, they've been vocal about how much they respect and admire each other, and that feeling remained even when they weren't together.

Here are some of Cyrus and Hemsworth's sweetest quotes about each other from the past 10 years. Now that they're newlyweds, it seems like there's a very good chance that these two have plenty more adorable things to say about their relationship in the years to come.

She Recently Called Him Her Survival Partner

When Cyrus appeared on The Howard Stern show in December, she opened up about losing the home she shared with Hemsworth in the California wildfires, and explained that the experience brought them closer together.

"My partner — I call him my survival partner now," Cyrus said. "And he thinks it's not romantic, but I learned that is why you pair up with someone, for survival."

On Why Their Breakup Was Necessary

After Cyrus and Hemsworth got back together, she explained why their 2013 split needed to happen in an interview with Sirius XM back in May 2017. According to Vogue, the singer said:

“I think if you're growing up attached to another person, you never really get solid as your own being. I'm really solid and he gets to be really solid. Together we get to be two really grounded people. It's not a half and a half making a whole.”

Even after ending things with Cyrus, Hemsworth continued to consider her an "important part" of his life because of the time they'd spent together. He told Men's Fitness in 2015:

“You fall in love with who you fall in love with; you can never choose," he told the magazine in October 2015. “I guess some people just come with a little more baggage. I mean, look — we were together five years, so I don't think those feelings will ever change. And that’s good because that proves to me that it was real. It wasn’t just a fling. It really was an important part of my life and always will be."

Not long after they tied the knot, Cyrus celebrated Hemsworth's birthday with a long and emotional social media post, listing out all the reasons she loves him.

"In our time together you have displayed what it really means to love thru all circumstances," she wrote. "I respect you and you respect me. If the world had more of this type of understanding we wouldn't be building more walls but bridges."

While talking to Seventeen in 2009, Cyrus opened up about meeting Hemsworth for the first time while filming The Last Song, and it sounded like love at first sight. She said:

"So I heard a rumor that he didn't really want the role, and so when he came in to audition for the role, I'm thinking, 'Here's this guy, he's amazingly good-looking, super-confident, and he doesn't realize how blessed he is to be in this room, because I know how blessed I am. This is such a big opportunity for both of us.' And I was thinking 'Ugh, gross,' you know?"

Luckily, Cyrus had a change of heart and continued, "Then I started talking with him, and he was just the most genuinely precious, sweet person. And the second audition comes around, and the chemistry was instant. From the time he walked in that door and we saw each other again, we lit up, and we were excited to get work and learn together."

Hemsworth On Marriage So Far

When E! News caught up with Hemsworth in January, he gushed about how much he's loving being married to Cyrus so far.

"The husband and wife thing is great. I'm loving it," Hemsworth said. "I'm really, really happy and grateful to be in the position I'm in."

Now that Cyrus and Hemsworth are married, it's more obvious than ever how much they truly do love each other. It's already so much fun for fans to follow along with their relationship, and it seems like there's plenty more where these adorable quotes come from in the future.