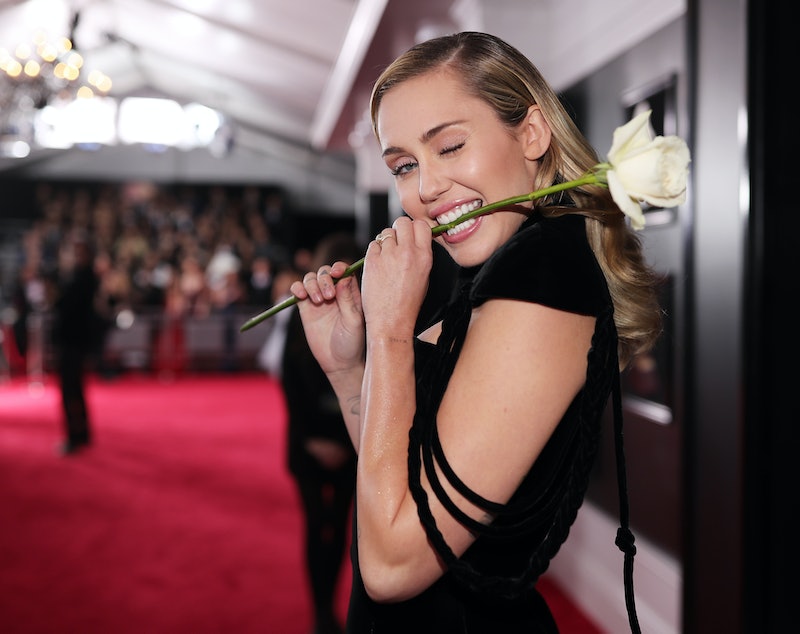 Miley Cyrus made her comeback on the red carpet at the Grammys, and she's been bringing the looks ever since. The singer might not be wearing onesies and foam fingers anymore, but that doesn't mean that she's giving up her quirky ensembles. As PopSugar originally reported, Miley Cyrus wore and optical illusion jumpsuit on Instagram — and the item will have you taking a second glance.

Remember when The Dress took the internet by storm, making people pick sides on the color? Well, this might just be the next sartorial illusion. Cyrus posted a photo on her Instagram wearing a plain, black jumpsuit in the most unconventional way. At first glance, this looks like your average outfit — until you see that her arms are not in the sleeves.

The top of the jumpsuit hangs on her torso, making her basically a mannequin holding the outfit. It's not until Cyrus turns to the back that you see the outfit is really just a strapless jumpsuit.

You know those Halloween costumes that you wear half of, so it looks like you're really riding a horse or donkey? Consider this the same, but way more high fashion. There's no word where the singer wore the quirky outfit, but at least there's an Instagram photoshoot to preserve the moment.

According to Cyrus' Instagram tag, the optical illusion jumpsuit was created by Jean Paul Gaultier. So, yes, this funky outfit is high fashion, my friends. The designer is known for pushing the limits on fashion and creating quirky, eye-catching looks.

Unfortunately, you aren't able to buy the optical illusion jumpsuit on the brand's website as of Jan. 31. You can always buy a jumpsuit and only wear half of it though. That's the most affordable option. All you need is some double sided tape.

All jokes aside, this really is a fierce look. No matter what Cyrus shows up in, you can guarantee that it will have a twist to it. It's nice to see that she's back on social media in full swing, showing off her quirky-cool fashion choices.

People were just as confused about the look as you probably are. Cyrus tweeted out a photo of the outfit and it got some mixed reviews. While some people were confused by the look, others absolutely love it. No matter what you think, it's creating conversation — which is really the point of fashion.

Here are some reactions to the look, so you can decide for yourself whether this is the best thing you've ever seen, the most confusing, or both. Either way, it will give you a good laugh.

Hi, Miley. Could you please explain what is going on here? Because we have a few people who really need some help figuring this one out.

Short, sweet, and to the point. To some people, it doesn't even matter what's going on in the photo. It's a great taking on the traditional.

Plot twist: this isn actually an anti-gravity suit that is defying gravity right now. Go ahead and laugh, but this could just be the fashion of the future.

I'm guessing that this is a play on words about Miley Cyrus being fashionable again? Seems like a compliment, but, just like the outfit, I just don't know.

Sasha is apparently a really big fan of the suit.

Cyrus wasn't lying when she said she was back, and she's taking her fashion looks very seriously.

Her outfit isn't the only thing that is quirky. People are loving that she's standing in front of doors that say, "garbage room doors must be closed at all times."

One thing is for sure — you just never know what Cyrus will wear next.