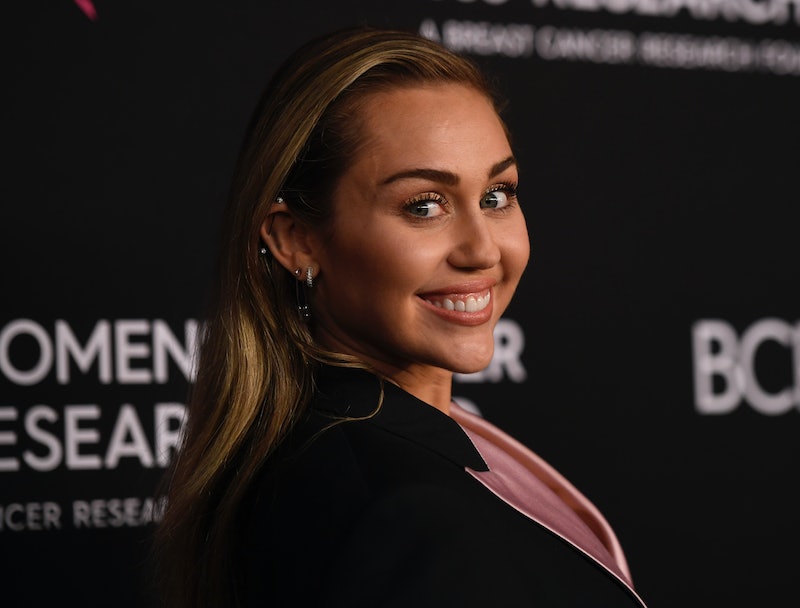 She's long taken a wrecking ball to societal gender and sexuality norms, and now Miley Cyrus has revealed why supporting the LGBTQA+ community has been such an essential part of her own identity. In fact, the story she told on the Feb. 27 episode of the RuPaul: What’s the Tee with Michelle Visage podcast goes all the way back to her time as a youth in Tennessee.

“When I was kind of growing up, being from the South ... my first experience, my first kiss was with a girl in middle school,” the Hannah Montana alum told the hosts during the most recent installment of their podcast. “And no one could understand, in Nashville ... I was one of the only kids on Disney that would come out and say that I supported all my gay friends. And I would write these songs, and no one could say that."

For Cyrus — who, in 2015, described herself as "pansexual" in an interview with Elle UK and also told the Associated Press the same year that all of her past relationships hadn't been heterosexual — her motivation was to "find what mattered" most to her. Her advocacy for LGBTQA+ issues since then has been undeniable, with the Grammy winner even launching the Happy Hippie Foundation, which she also mentioned in the podcast Q&A. According to the organization's website, "Our mission is to rally young people to fight injustice facing homeless youth, LGBTQ youth and other vulnerable populations."

The messages she's most embraced from the community, she said, goes beyond sexuality and is much more simple, adding, it's about "being your f*cking self." She added: "It doesn't have to attach to who you love. It's about you loving yourself even more than who you love outside yourself."

Cyrus noted that the same loving message is exactly what RuPaul's VH1 reality TV competition shares with the world. So it was a natural fit, of course, for Cyrus to guest judge the RuPaul's Drag Race Season 11 premiere on Feb. 28. And that love and acceptance was on full display. During her stint on the show, Cyrus went undercover as a male Drag Race crew member named Barry Johnson "AKA BJ" for some recon in the Werk Room. The episode even returned the love, paying homage to Hannah Montana, featuring an epic lip-sync battle to Cryus' unforgettable 2006 bop, “The Best of Both Worlds.”

Cyrus, who wed actor Liam Hemsworth in December, recently opened up to Vanity Fair about being queer in an opposite sex marriage:

"A big part of my pride and my identity is being a queer person. What I preach is: People fall in love with people, not gender, not looks, not whatever. What I’m in love with exists on almost a spiritual level. It has nothing to do with sexuality. Relationships and partnerships in a new generation — I don’t think they have so much to do with sexuality or gender. Sex is actually a small part, and gender is a very small, almost irrelevant part of relationships.”

Cyrus' support for the LGBTQA+ has never wavered, and, after hearing why it means so much to her, totally makes sense.