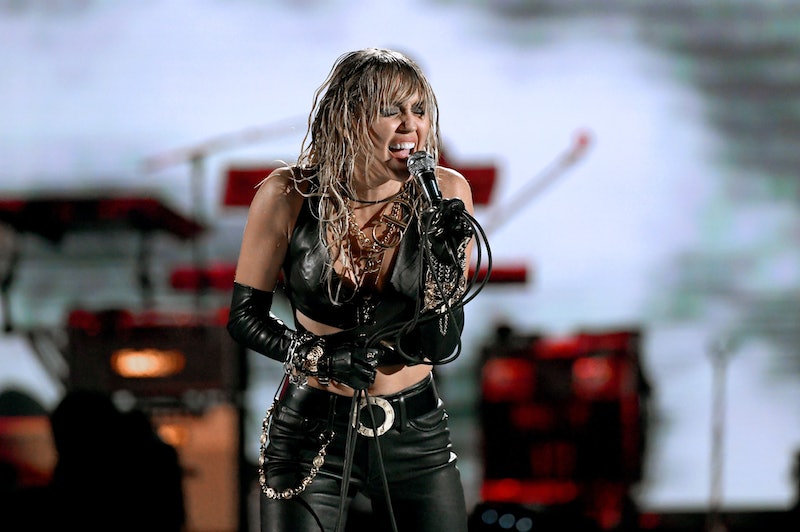 In the latest celebrity breakup news, Miley Cyrus’ split from Kaitlynn Carter parallels her breakup with Liam Hemsworth. Following the Sept. 21 reports that Cyrus and Carter had called it quits after a month of dating, an Entertainment Tonight source has offered insights into why the whirlwind romance ended. “Miley loves her autonomy and is a free spirit,” the source told ET in a Sept. 27 exclusive. “And she doesn’t plan to remarry anytime soon. Despite her breakup with Liam, she’s actually doing really well."

Cyrus and Carter were first linked in August, amid news that Cyrus had split from Hemsworth after eight months of marriage. The two tied the knot in December 2018. Cyrus' rep confirmed the split on Aug. 10 with the following statement: “Liam and Miley have agreed to separate at this time. Ever-evolving, changing as partners and individuals, they have decided this is what’s best while they both focus on themselves and careers. They still remain dedicated parents to all of their animals they share while lovingly taking this time apart."

Prior to news of the split, images of Cyrus and Carter kissing in Italy surfaced online on Aug. 10. Days later, Hemsworth filed for divorce on Aug. 21. Given the social media posts that followed post-split, however, the two appear to be on good terms. On Aug. 22, Cyrus addressed her breakup with Hemsworth — and denied cheating rumors — in a series of tweets. “I can admit to a lot of things but I refuse to admit that my marriage ended because of cheating,” she tweeted. “Liam and I have been together for a decade. I’ve said it before & it remains true, I love Liam and always will.”

She wrote in a follow-up tweet, “BUT at this point I had to make a healthy decision for myself to leave a previous life behind. I am the healthiest and happiest I have been in a long time. You can say I am a twerking, pot smoking , foul mouthed hillbilly but I am not a liar.” A few days later, Hemsworth addressed the split in an Aug. 30 Instagram post and echoed the same sentiments. "Miley and I have recently separated and I wish her nothing but health and happiness going forward,” he wrote.

After her split from Hemsworth, Cyrus had been spotted out and about with Carter. As for her breakup with Carter, ET added it was Cyrus’ decision to end things due to her desire for autonomy — the same reason referenced in her split from Hemsworth, as per her rep's statement that the two want to "focus on themselves." The source told ET, “Miley made the final decision to split with. Her relationship with Kaitlynn is over and she wants to be on her own."

Despite Cyrus and Carter's breakup, the two still remain friends, according to PEOPLE. “They’re still friends,” a source told the publication on Sept. 22. “They’ve been friends forever and were there for each other when they were both getting separated, but they’re just not in a romantic relationship anymore.”

While breakups are hard, remaining on amicable terms with your exes should certainly, hopefully make the healing process easier.

More like this
Selena + Chef Season 4 Was Filmed At Hannah Montana's Old Malibu House
By Jake Viswanath
Kim Kardashian & Pete Davidson’s Relationship Timeline From Start To Finish
By Jordyn Tilchen and Bustle Editors
Who Is Camila Cabello Dating? She's Getting Cozy With Lox Club CEO Austin Kevitch
By Radhika Menon
'A League Of Their Own' Star Abbi Jacobson Is Engaged To Jodi Balfour
By Jake Viswanath
Get Even More From Bustle — Sign Up For The Newsletter