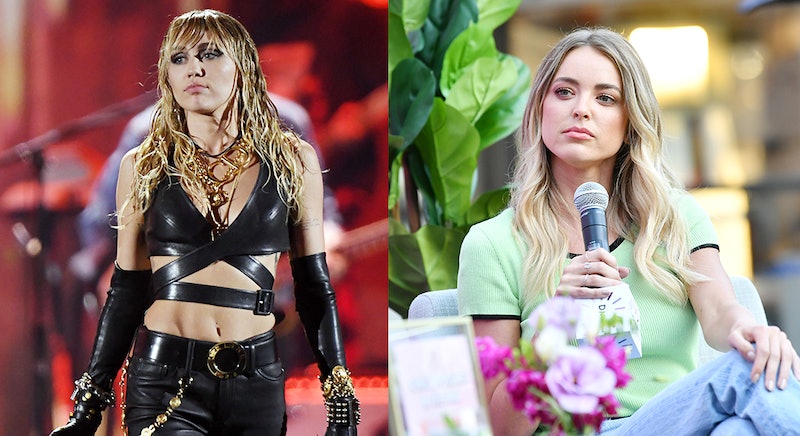 Just over a month after they were spotted kissing on their girls' trip to Italy, a source told People that Miley Cyrus and Kaitlynn Carter reportedly broke up on Saturday, Sept. 21. This marks the second split for both of them in less than two months. Cyrus' now-ex-husband Liam Hemsworth filed for divorce on Aug. 21 after months of estrangement, and Carter announced her split from Brody Jenner on Aug. 2. (Bustle reached out to Cyrus and Carter's reps for comment, but has not yet heard back.)

“Miley and Kaitlynn broke up. They’re still friends,” the source told People. On Sunday, Sept. 22, People published an additional report in which a source claimed that Cyrus wasn't ready for a serious relationship. “She and Kaitlynn spent every day together," this source said. "She wants to focus on her career.” Shortly after her split from Carter was reported, Cyrus hit the stage in Vegas at the iHeart Radio Music Festival over the weekend and performed "Slide Away," which is believed to be inspired by her split from Hemsworth.

The news of Cyrus and Carter's split comes a little over a week after they were reportedly spotted displaying affection for one another while walking around Los Angeles in matching outfits and kissing in a restaurant booth during New York Fashion Week on Sept. 11. “They were highly guarded with a sea of friends surrounding, but they were in their own world," a source told People at the time. "Totally transfixed and didn’t care at all about what was happening around them." Carter also left an affectionate comment on one of Cyrus' Fashion Week Instagram photos. "Dear god," she wrote, adding the drooling emoji. On Sept. 2, a source told People the pair had moved in together in L.A. and were "very happy."

It's currently unclear whether something specific happened to cause Cyrus' breakup with Carter. Regardless, the source told People that the pair's dating relationship ended on good terms. “They’ve been friends forever and were there for each other when they were both getting separated,” the source added, “but they’re just not in a romantic relationship anymore.”

Although they were only reportedly an item for around six weeks, they did a lot together. Along with their NYFW appearance, they also celebrated Carter's 31st birthday, and attended the MTV Video Music Awards, where Carter's ex Jenner went to the same after-party. It seemed to be relatively drama-free, and it looks like their breakup could be too.

As for Jenner, he's officially moved on from Carter, as he is dating model Josie Canseco, per Us Weekly. As for Hemsworth, he's spending time with family at the moment and focusing on his work in film. His breakup with Cyrus didn't seem to go as smoothly, though. After Cyrus' agent announced their split, cheating rumors circulated involving Carter and Cyrus. Soon after, Cyrus defended herself on social media, shutting down the idea she was ever unfaithful to Hemsworth.

"I can admit to a lot of things but I refuse to admit that my marriage ended because of cheating," she wrote on Twitter. "Liam and I have been together for a decade. I’ve said it before & it remains true, I love Liam and always will." She continued, "BUT at this point I had to make a healthy decision for myself to leave a previous life behind. I am the healthiest and happiest I have been in a long time. You can say I am a twerking, pot smoking , foul mouthed hillbilly but I am not a liar."

On Sept. 20, Cyrus released the music video for "Don't Call Me Angel" in collaboration with Ariana Grande and Lana Del Rey for the soundtrack of the upcoming Charlie's Angels movie. Fans immediately speculated that the title is an Easter egg about Hemsworth, who often referred to her as an angel throughout their relationship and in many Instagram posts. However, that speculation has not been confirmed by the singe herself.

Cyrus performed "Don't Call Me Angel" live for the first time at the iHeart Radio Music Festival this past weekend and seems to be doing what the source had said — focusing on her music after both recent splits.

More like this
RHOP’s Robyn Dixon Explained Why Juan Paid For Another Woman's Hotel Room
By Brad Witter
4 Surprising Celeb Throuples That Got The Internet Talking
By Sophie McEvoy
Who Is Allison Williams Dating After Her Divorce? She’s Engaged With A Child
By Jake Viswanath
Michael B. Jordan Tackled His "Public Breakup" With Lori Harvey On 'SNL'
By Brad Witter
Get Even More From Bustle — Sign Up For The Newsletter
From hair trends to relationship advice, our daily newsletter has everything you need to sound like a person who’s on TikTok, even if you aren’t.